One of the most frequent questions and topics that I see come up on community resources such as StackOverflow, the Confluent Platform mailing list, and the Confluent Community Slack group, is getting data from a database into Apache Kafka®, and vice versa. Often it’s Oracle, SQL Server, DB2, etc—but regardless of the actual technology, the options for doing it are broadly the same. In this post we’ll look at each of those options and discuss the considerations around each. It may be obvious to readers, but it’s worth restating anyway: since this is Kafka—a streaming platform—we are talking about streaming integration of data, not just bulk static copies of the data.

Before we dive too deeply into this, bear in mind that you don’t always need a database. If you’re wanting to ingest data from a database into Kafka, how did that data get into the database in the first place? Would it be better to instead ingest the data from the original source directly into Kafka itself? If you’re streaming data from Kafka into a database, why are you landing it to a database? Is it to integrate with another system that’s consuming the data? Would that other system be better ingesting the data from Kafka instead? It’s important to challenge assumptions about how systems are built, as Kafka introduces what we refer to in the trade as a paradigm shift that we need to leverage. Why introduce a database into an architecture if we could use a streaming platform such as Kafka instead? Kafka persists data, Kafka can process and transform data with the Kafka Streams API and KSQL too. Sometimes you need a database; but not always. For more insight on this, check out these articles:

So anyway…assuming we’ve decided that we do indeed need a database, let’s look first at how we can get data from a database into Apache Kafka.

The two options to consider are using the JDBC connector for Kafka Connect, or using a log-based Change Data Capture (CDC) tool which integrates with Kafka Connect. If you’re considering doing something different, make sure you understand the reason for doing it, as the above are the two standard patterns generally followed – and for good reasons.

The Kafka Connect API is a core component of Apache Kafka, introduced in version 0.9. It provides scalable and resilient integration between Kafka and other systems. 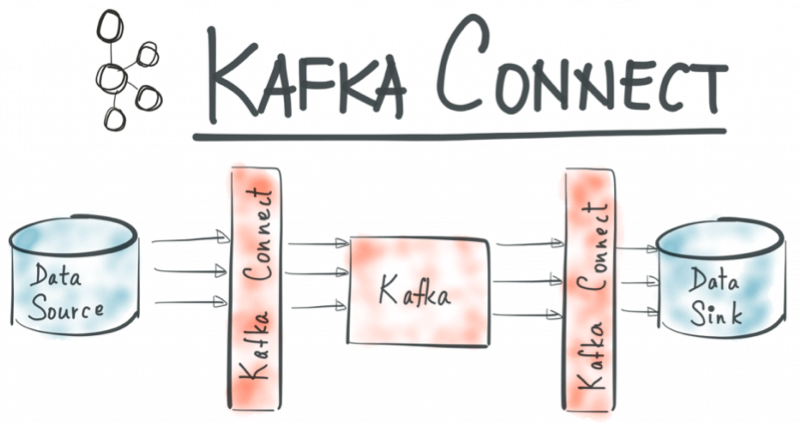 It is driven purely by configuration files, providing an easy integration point for developers.

Kafka Connect can be run as a clustered process across multiple nodes, and handles all the tricky business of integration, including:

To use Kafka Connect you simply need a plugin that integrates with the technology that you’re interested in. The Confluent Platform ships with several of these plugins, including JDBC, HDFS, Elasticsearch, and S3. You can find dozens more plugins for Kafka Connect here.

The Confluent JDBC Connector for Kafka Connect enables you to stream data to and from Kafka and any RDBMS that supports JDBC (which is to say pretty much any). It can stream entire schemas or just individual tables. It can pull the entire contents (bulk), or do an incremental fetch of data that’s changed since the last poll using a numeric key column, an update timestamp, or both.

Because the JDBC Connector uses the Kafka Connect API, it has several great features when it comes to streaming data from databases into Kafka:

So the JDBC Connector is a great start, and is good for prototyping, for streaming smaller tables into Kafka, and streaming Kafka topics into a relational database. But (and there’s always a but!) here are some considerations to bear in mind:

So the JDBC connector is definitely the best place to get started with integrating databases and Kafka. But, particularly for streaming data from a database into Kafka, we sometimes need a better option.

If you want to go “the whole hog” with integrating your database with Kafka, then log-based Change-Data-Capture (CDC) is the route to go. Done properly, CDC basically enables you to stream every single event from a database into Kafka. Broadly put, relational databases use a transaction log (also called a binlog or redo log depending on DB flavour), to which every event in the database is written. Update a row, insert a row, delete a row – it all goes to the database’s transaction log. CDC tools generally work by utilising this transaction log to extract at very low latency and low impact the events that are occurring on the database (or a schema/table within it).

Many CDC tools exist, serving a broad range of sources. Some specialise in broad coverage of source systems, others in just specific ones. The common factor uniting most of them is close integration with Apache Kafka and Confluent Platform. Being able to stream your data from a database not only into Kafka, but with support for things such as the preservation of schemas through the Schema Registry, is a defining factor of these CDC tools. Some are built using the Kafka Connect framework itself (and tend to offer a richer degree of integration), whilst others use the Kafka Producer API in conjunction with support for the Schema Registry, etc.

CDC tools with support from the vendor and integration with Confluent Platform are (as of March 2018):

You can read more about CDC & Kafka in action at these articles:

So what’s the catch with CDC? There isn’t one, per se. CDC is low impact, low latency, and gives you full data fidelity. There are a few reasons why you may not use a CDC tool when integrating a database with Kafka, at least to start with:

My general steer on CDC vs JDBC is that JDBC is great for prototyping, and fine low-volume workloads. Things to consider if using the JDBC connector:

Also bear in mind what your requirements are for the data. Are you wanting to simply stream data from the database so that you can use it in a traditional analytics/ETL sense? Or are you building event-driven applications? The former gives you more leeway on how you implement. The latter almost certainly necessitates a log-based CDC approach, because you need not only every event (rather than just the state at an arbitrary point in time), and you also need delete events.

For analytics and ETL, streaming data in from a database is a powerful way to integrate existing systems with Kafka. The great thing is that because Apache Kafka decouples sources and targets, you can easily switch one out for another. For example, an iterative development could look like :

If you’d like to learn more about the Confluent Platform, here are some resources for you:

Join us for a 3-part online talk series for the ins and outs behind how KSQL works, and learn how to use it effectively to perform monitoring, security and anomaly detection, online data integration, application development, streaming ETL, and more.