This article discusses the use of Apache Kafka’s Streams API for sending out alerts to customers of Rabobank. Rabobank is based in the Netherlands with over 900 locations worldwide, 48,000 employees, and €681B in assets. It is a bank by and for customers, a cooperative bank, a socially-responsible bank. It aims to be market leader across all financial markets in the Netherlands. Rabobank is also committed to being a leading bank in the field of food and agriculture worldwide. Rabobank provides financial products and services to millions of customers around the world.

For the past years, Rabobank has been actively investing in becoming a real-time, event-driven bank. If you are familiar with banking processes, you will understand that that is quite a step. A lot of banking processes are implemented as batch jobs on not-so-commodity hardware, so the migration effort is immense. But as said, Rabobank picked up this challenge and defined the Business Event Bus (BEB) as the place where business events from across the organization are shared between applications. They chose Apache Kafka as the main engine underneath and wrote their own BEB client library to facilitate application developers with features like easy message producing/consuming and disaster recovery.

Rabobank uses an Active-Active Kafka setup, where Kafka clusters in multiple data centers are mirrored symmetrically. Upon data center failure or operator intervention, BEB clients—including the Kafka Streams based applications discussed in this article—may be switched over from one Kafka cluster to another without requiring a restart. This allows for 24×7 continued operations during disaster scenarios and planned maintenance windows. The BEB client library implements the switching mechanisms for producers, consumers and streams applications.

Rabo Alerts is a system formed by a set of microservices that produce, consume and/or stream messages from BEB. All data types and code discussed below can be found in a GitHub repository. This post will simplify source code listings to some extent (removing unused fields for example), but the listings still reflect the actual code running in production.

Rabo Alerts is a service that allows Rabobank customers to be alerted whenever interesting financial events occur. A simple example of an event is when a certain amount was debited from or credited to your account, but more complex events also exist. Alerts can be configured by the customer based on their preferences and sent via three channels: email, SMS and mobile push notifications. It’s noteworthy to mention that Rabo Alerts is not a new or piloted service. It has been in production for over ten years and is available to millions of account holders.

The former implementation of Rabo Alerts resided on mainframe systems. All processing steps were batch-oriented, where the mainframe would derive alerts to be sent every couple of minutes up to only a few times per day, depending on the alert type. The implementation was very stable and reliable, but there were two issues that Rabobank wanted to solve: (1) lack of flexibility and (2) lack of speed.

Flexibility for adapting to new business requirements was low because changing the supported alerts or adding new (and smarter) alerts required a lot of effort. Rabobank’s pace to introduce new features in its online environment has increased heavily in the past years, thus an inflexible alerting solution was becoming increasingly problematic.

Speed of alert delivery was also an issue, because it could take the old implementation 5 minutes up to 4-5 hours to deliver alerts to customers (depending on alert type and batch execution windows). Ten years ago one could argue this was fast enough, but today customer expectations are much higher! The time window in which Rabobank can present “relevant information” to the customer is much smaller today than it used to be ten years ago.

So the question was raised on how the existing mechanism could be redesigned to become more extensible and faster. And of course the redesigned Rabo Alerts, too, would need to be robust and stable so that it could properly serve its existing user base of millions of customers.

For the past year we have been redesigning and reimplementing the alerting mechanisms using Kafka and Kafka’s Streams API. Since the entire Rabo Alerts service is quite big, we decided to start with four easy but heavily used alerts:

Each of these alerts can be derived from the stream of payment details from the Current Account systems. Customers can enable these alerts and configure their own threshold per alert. For instance: “send me an SMS when my balance drops below €100” or “send me a push message when someone credits me more than €1000” (often used for salary deposit notifications).

Here are some screenshots that illustrate how Rabo Alerts are configured through the mobile banking app. 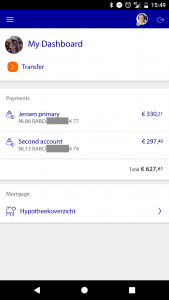 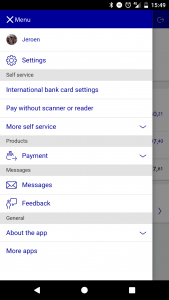 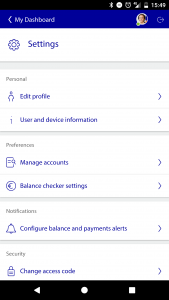 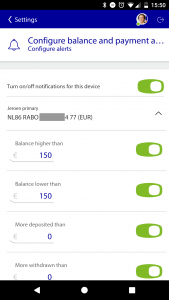 Our first step was to redesign the alerting process. The basic flow goes like this:

Using this flow and requirements, we started drawing the following topic flow graph: 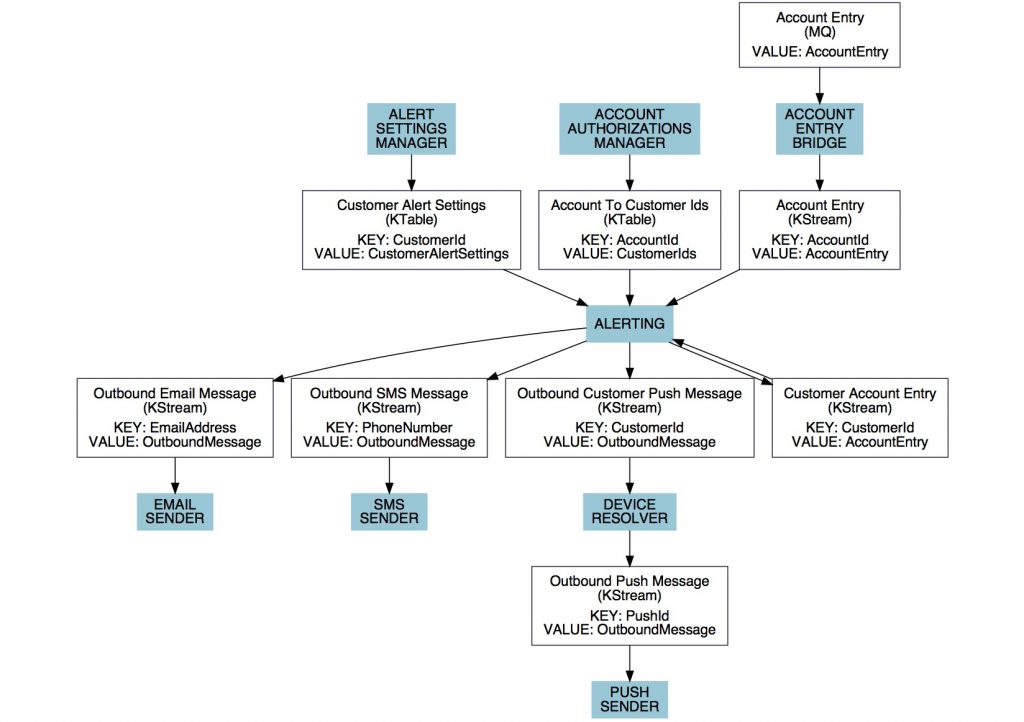 All the white boxes in the picture are Kafka topics, listing their Avro key/value data types. Most data types are self-explanatory, but the following data types are worth mentioning:

The blue boxes are standalone applications (one might call them microservices), implemented as runnable jars using Spring Boot and deployed on a managed platform. Together they consist of all necessary functionality to implement Rabo Alerts:

The Kafka Streams code for Alerting consists of only 2 classes.

The first class is the BalanceAlertsTopology. This class defines the main Kafka Streams topology using a given KStreamBuilder. It implements BEB’s TopologyFactory, a custom interface used by BEB’s client library to generate a new Kafka Streams topology after the application starts or when it is directed to switch over to another Kafka cluster (datacenter switch/failover).

The topology defines a number of steps:

The magic of alert generation is implemented in the BalanceAlertsGenerator helper class, called from line 17. Its main method is generateAlerts(), which gets an account entry and alert settings from an authorized customer to view the account. Here’s the code:

The method executes these steps:

Other helper methods in the same class are:

Together with a few additional classes to wrap this functionality in a standalone application, that’s all there is to it!

After a first rudimentary implementation, we took the setup for a test drive. It was still a question of how fast it would be. Well, it proved to amaze us—and our expectations started out high! The whole round trip from payment order confirmation to the alert arriving on a mobile device takes only one to two seconds, more often being around one rather than two. This round trip includes the time taken by the payment factory (validation of the payment order, transaction processing), so response times may vary somewhat depending on the payment factory workload at that point in time. The whole alerting chain—from an account entry posted on Kafka up to senders pushing out messages to customers—is typically executed within 120 milliseconds. In the sending phase, push alerts are fastest, taking only 100-200 milliseconds to arrive on the customer’s mobile device. Email and SMS are somewhat slower channels, with messages arriving 2-4 seconds after the Senders push them out. Compare that to the old setup, where it would typically take several minutes up to a few hours until an alert would be delivered.

The following video demonstrates the speed of alert delivery using my personal test account. Note that although I use it for testing, this is a regular Rabobank payment account that runs in production!

First you see that I enable alerts on my device and I configure the DebitedAboveThreshold alert (“More withdrawn than”) with a threshold of zero. This means that any payments above €0 will result in an alert sent to me. Not shown in the video is that I set it up for both Push and SMS, so alerts are sent via two channels. After saving the settings and returning to the home screen I start the transfer €1 to my colleague Joris Meijer and sign the transaction using my fingerprint. The payment order is then sent to the payment factory to commence processing. Before the order confirmation closes, the push alert already comes in at the top of the screen as shown in the notification window. A few seconds later you also see the SMS message arriving with the same contents.

The new mechanism is elegant and simple, consisting of only a few Java classes. The logic was written in about four weeks. Still, to get the whole topology to work took around six months. This is mainly because the Alert Settings Manager, Account Authorizations Manager, and the Account Entry Bridge all had to be specified and agreed upon with other parties within the bank.

After the team was able to generate their own alerts successfully, it was time to test more thoroughly and on a bigger scale. After all, we wanted to make absolutely sure customers won’t miss alerts or receive alerts when they shouldn’t. We piloted the new mechanism for around two months using 25,000 Rabobank employees as our pilot group. This gave a better view of how the system would behave with production data and under higher loads. Also, if things failed (and they did sometimes) Rabobank employees are a lot more forgiving than paying customers. During the pilot we optimized the alert generation and removed some edge-case bugs in the surrounding applications.

After approval the new setup went live for the millions of Rabobank customers on June 8th. It was a very exciting moment for us—not only because it works, but also because we can never go back. We have effectively elevated all customer expectations by sending alerts with a latency of seconds instead of minutes or hours. If for some reason one of the component services should fail, customers would immediately notice, since their alerts will start arriving much later. Therefore we monitor the setup closely, but so far it has been running very smoothly and predictably.

The new implementation provides instantaneous alerts and is easily extensible, and thus meets Rabobank’s requirements for speed and flexibility. But the four alert types mentioned here are not the only Rabo Alerts offered. There are about ten other alerts that customers can configure, like “alert me when I receive a payment from a given account number” and “alert me when a payment order could not be executed”. The obvious next step is to migrate these alerts from the mainframes to the new landscape, but that requires hooking up more payment systems like the payment order execution engines. We will be working on that in the coming months. And it does not stop there! The new implementation also spurred a flood of new ideas, which we’ll be able to talk publicly about (and even demonstrate) soon.

Streams and Tables in Apache Kafka: Elasticity, Fault Tolerance, and Other Advanced Concepts

Now that we’ve learned about the processing layer of Apache Kafka® by looking at streams and tables, as well as the architecture of distributed processing with the Kafka Streams API […]

Streams and Tables in Apache Kafka: Processing Fundamentals with Kafka Streams and ksqlDB

Part 2 of this series discussed in detail the storage layer of Apache Kafka: topics, partitions, and brokers, along with storage formats and event partitioning. Now that we have this […]

Streams and Tables in Apache Kafka: A Primer

This four-part series explores the core fundamentals of Kafka’s storage and processing layers and how they interrelate. In this first part, we begin with an overview of events, streams, tables, […]