Consuming messages in parallel is what Apache Kafka® is all about, so you may well wonder, why would we want anything else? It turns out that, in practice, there are a number of situations where Kafka’s partition-level parallelism gets in the way of optimal design. For example, when partition counts are fixed for a reason beyond your control, you need to call other databases or microservices—which can take a while to respond—or use queue-like semantics, where slow-to-process messages don’t hold up faster ones further back in the queue. These are just a few of the reasons why we wrote the Confluent Parallel Consumer, which provides an alternate approach to parallelism that subdivides the unit of work from a partition down to a key or even a message.

In essence, the Parallel Consumer is a JVM-based, Apache 2.0 client library that includes everything you’d expect in regular Kafka consumers: consumer groups, transactions/exactly-once semantics, etc., but also three new features in addition to these.

Second, the Parallel Consumer makes it easy for you to call out to other services efficiently without stalling your application. For instance, if you need to look up customer details from a database or while you are processing messages, you can make these requests in parallel via non-blocking I/O.

In looking at each of these features, we’ll discuss use cases that the library applies to and dive into the major technical themes of its implementation.

Consider a real-world application that validates the position of trains on a rail network. Around 10,000 trains are active at the same time, all sending their GPS location into a central Kafka cluster. The application has to validate the coordinates of each train by calling a legacy HTTP service. Originally, the system had five consumers in a consumer group working in parallel, but this setup only processes around 1,000 messages per second because each request to the HTTP service takes on average 50 ms to return. What is more, new consumers cannot easily be added to the consumer group as the topic is created with only five partitions. With many other applications consuming this data and expecting guaranteed ordering, changing the partition count isn’t the easiest option.

The Parallel Consumer addresses two issues with this implementation. We can increase the parallelism without increasing the partition count. We can also pipeline the calls to the legacy HTTP service. Both of these ensure that processing in key-order is maintained. The resulting application is up to 2,000 times faster than the initial implementation (assuming the HTTP service can keep up!).

There are many other use cases that can benefit from the Parallel Consumer. These are detailed in the Scenarios section of the README of the main project.

An alternative path to parallelism in Apache Kafka

In Kafka, the topic partition is the unit of parallelism. The more partitions, the higher the processing parallelism. For example, if a topic has 30 partitions, then an application can run up to 30 instances of itself—such as 30 Docker containers—to process the topic’s data collaboratively and in parallel. Each of the 30 instances will get exclusive access to one partition, whose messages it will process sequentially. Any instances beyond 30 will remain idle. Message ordering is also guaranteed by the partition construct—each message will be processed in the order in which it is written to the partition.

To further increase the processing parallelism, we can increase a topic’s partition count in place. The downside is that it breaks key-based ordering, as messages with the same key will likely be stored in different partitions before versus after the partition increase. The recommended procedure is therefore to create a new topic with the desired partition count, and copy the original topic’s messages into it. To perform repartitioning automatically, you can use tools like ksqlDB and Kafka Streams.

However, there are situations where this procedure—automated or manual—is not the best choice. In some cases, you might prefer not to duplicate the original topic. And in other cases, you might not be able to assess—through load-testing beforehand or even back-of-the-envelope calculations—how many partitions will be required for a certain use case (e.g., at the time of the first production deployment), even though you might want to do this assessment for every new topic.

The Confluent Parallel Consumer allows you to parallelize processing at three different levels:

These modes of operation not only increase performance but also address what is referred to as the “slow consumer” scenario. If it takes a long time to process a particular message, then all messages in the same partition will be held up by this slow-to-process message.

Note that many factors can contribute to slow processing, including CPU, I/O, or network bound. Other examples are garbage collection or the slow response of a third-party system, such as a database or web server that you need to interact with. Both key-level parallelism and unordered parallelism help address this problem.

Key-level parallelism (which retains key-level ordering) will satisfy most use cases, in which partition ordering is not necessary. Thus, the Parallel Consumer allows you to take advantage of improved handling of slow consumers as well as a higher degree of parallel processing.

Where ordering is simply not a requirement, the Confluent Parallel Consumer also offers a queueing type of behavior called unordered parallelism, where each offset is tracked individually for completion. This is persisted to the broker so that after failure recovery or partition rebalancing, only messages that have not been completed correctly will be replayed regardless of the actual consumer protocol committed offset. 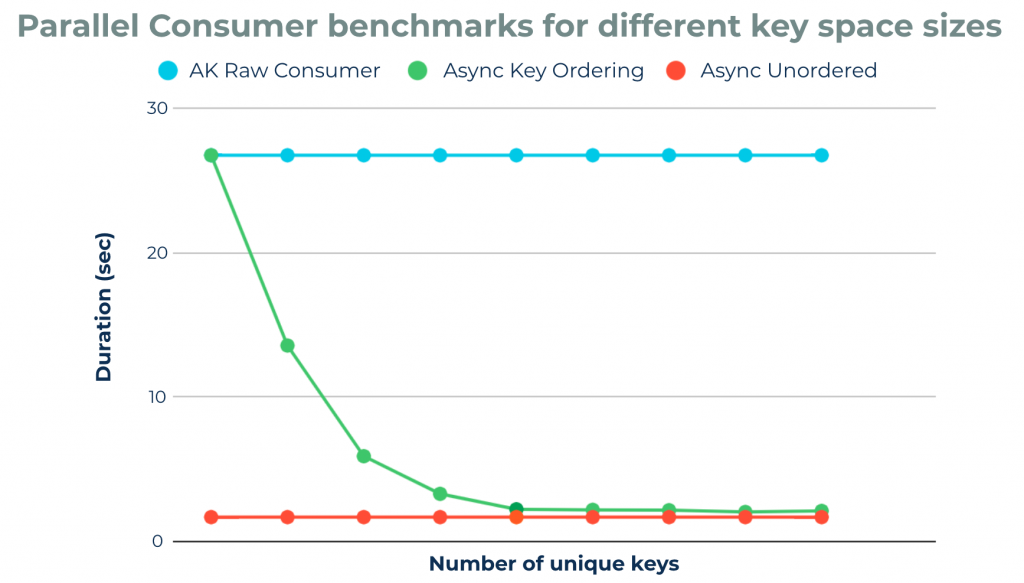 Implementing this type of processing is simple. Here is an example:

Another benefit of the Confluent Parallel Consumer is that it automatically handles the pipelining of requests to external resources like databases or the REST interfaces exposed in many microservice architectures. An example is shown in the figure below. 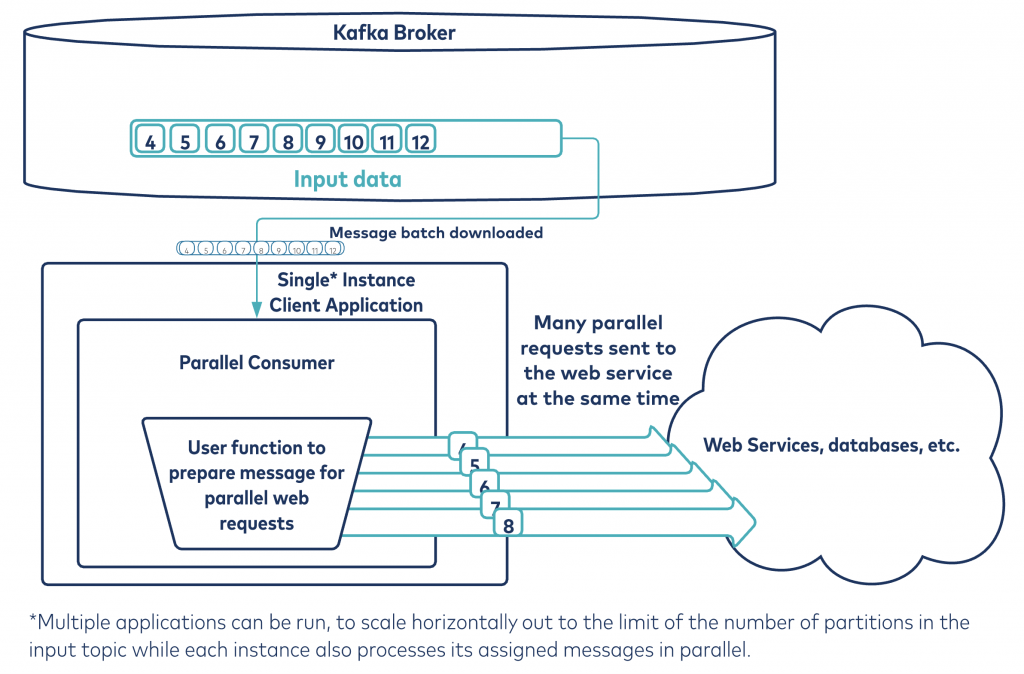 To speed up the message processing system even more, the library includes an optional Vert.x integration extension, which supplies non-blocking interfaces that allow for higher levels of concurrency without being restricted to thread pool sizes.

As an example, you can call an HTTP endpoint for each message by simply returning an object that represents the request. The Vert.x HTTP engine will handle the rest using its non-blocking engine.

See many more examples on the project homepage.

For a code example, see the Kafka Streams Concurrent Processing section of the README.

Adding parallel processing to a Kafka consumer is not a new idea. It is common to create your own, and other implementations do exist although the Confluent Parallel Consumer is the most comprehensive. It lets you build applications that scale without increasing partition counts, and it provides key-level processing and elements of queuing. We encourage you to clone the repository and try it out in your projects!

Note that this library is experimental, and Confluent does not currently offer support for it at this time. If you have any feature ideas or questions as well, please get in touch, and we will help you work on submitting a PR.