Imagine you’ve got a stream of data; it’s not “big data,” but it’s certainly a lot. Within the data, you’ve got some bits you’re interested in, and of those bits, you’d like to be able to query information about them at any point. Sounds fun, right? Since I said “stream of data”—and you’re reading this on a blog about Apache Kafka®—you’re probably thinking about Kafka, and then because I mentioned “querying,” I’d hazard a guess that you’ve got in mind an additional datastore of some sort, whether relational or NoSQL.

But what if you didn’t need any datastore other than Kafka itself? What if you could ingest, filter, enrich, aggregate, and query data with just Kafka? With ksqlDB we can do just this, and I want to show you exactly how.

We’re going to build a simple system that captures Wi-Fi packets, processes them, and serves up on-demand information about the devices connecting to Wi-Fi. The “secret sauce” here is ksqlDB’s ability to build stateful aggregates that can be directly accessed using pull queries. This is going to power a very simple bot for the messaging platform Telegram, which takes a unique device name as input and returns statistics about its Wi-Fi probe activities to the user:

Turning a stream into state

The data comes from Wireshark and is streamed to Kafka (provided by Confluent Cloud). The raw Kafka topic looks like this:

First, we declare a schema on it in ksqlDB with a STREAM:

From this, we can materialise state to answer questions such as:

Since we’re dealing with state (“what’s the value for this key?”) and not a stream (an unbounded series of values, which may or may not have a key), this is a TABLE object in ksqlDB:

Now we can query this table to find out the current state:

Taking a brief peek under the covers

So what’s going on here? It turns out that Kafka is not just a pretty face, nor is it just a highly scalable message broker. It’s also a platform with APIs for integration (Kafka Connect) and stream processing (Kafka Streams). Combined with ksqlDB, we can write SQL statements to take a Kafka topic and apply stream processing techniques to it such as:

But where’s it all stored? Normally, we’d be off to a NoSQL store or RDBMS to write this data out before an application can query it. Turns out, Kafka is a great place to store data (particularly with recent developments in Tiered Storage for data in Kafka). Kafka is distributed, scalable, and fault tolerant, and ksqlDB uses it as the persistent store for any tables (or streams) that are populated within it.

ksqlDB also uses RocksDB to build a local materialised view of the data held in the tables and aggressively caches this in memory. ksqlDB is also a distributed system and can run clustered across multiple nodes—and RocksDB will do the same. In a rather clever design, ksqlDB maintains a changelog for RocksDB in a Kafka topic as well—so if a node is lost, its state can be rebuilt directly from Kafka. Thus, Kafka is our primary and only system of record that we need in this scenario.

ksqlDB supports the ability to query a state store in RocksDB directly, and that’s what we saw above in the SELECT that we ran. If you’re familiar with Kafka Streams (on which ksqlDB is built), then you’ll recognise this functionality as interactive queries.

Querying state from a Kafka stream is insanely useful

There is an aphorism in the stream processing world:

Life is a stream of events

Put into more concrete terms: most of what happens around us and in the businesses for which we’re building systems usually originates as an event. Something happened. These “things” may well get batched up as part of the implementation detail of how they are stored and processed, but fundamentally, they occur as an unbounded (never-ending) series of things. It makes a lot of sense, then, to consider building a system around this model of events because it gives us the low-latency and semantic models that we need when dealing with this data.

Put another way, events are the lowest granularity of most data that we work with in our systems, and just as you can’t go back from a low-fidelity replica to the original, the same happens with our data. As soon as we roll it up and store it as a lump of state in a database, we lose all the benefit of the events underneath. Those benefits include event-driven applications and the analysis of behaviours within a stream of events.

If we agree that first capturing the changes that happen around us as a stream of events is a good idea, then we need to think about how we build systems around this. At one end of the scale, we have the classic kind of ad hoc analytics and static reporting that is invariably going to be driven from data in a store such as Amazon S3, Snowflake, or a suitable RDBMS. Kafka can stream events into these systems with Kafka Connect, so there’s no problem there. At the other end of the scale, we have applications that are going to be driven by these events, and subscribing to Kafka topics is the perfect way to do that.

But what about applications that aren’t event driven and aren’t analytics—those in between that still need to work with the data that we have from the original events, but that need this data materialised as state? Instead of an event-driven application that simply responds when an order is placed, we want another application to be able to look at “how many orders have been placed for a given customer” or “what was the total sales of a given item in the last hour.”

We can build this using Kafka and ksqlDB. ksqlDB allows you to define materialised views on top of a stream of data, which are available to query at low latency. ksqlDB uses SQL to declare these, and once the view is declared, any application can use the REST API to query it.

Building a Telegram bot with Kafka and ksqlDB

Telegram is a messaging platform, similar in concept to WhatsApp, Facebook Messenger, and so on. It has a nice Bot API, which we’re going to use here. I’ve drawn heavily on this tutorial for the foundations of this bot. It’s 💯 a proof of concept, so do take it with a pinch of salt. Whilst I’m using Telegram for this article, this same approach would work just fine with a bot on your own platform of choice (Slack, etc.) or within your own standalone application that wants to look up state that’s being populated and maintained from a stream of events in Kafka.

You first need to set up a Telegram bot, which I cover in detail already in this blog post. Once you’ve set up the Telegram bot, you need to run your code, which is going to provide the automation. We’re building a very simple example—someone sends a device name to the bot in Telegram, and it replies with the various statistics about the device. To enable the bot’s code to receive these messages, we’ll use the webhook API, which pushes the message to our local code. Since this is all just running on a laptop at home, we need to be able to listen for the inbound communication, and an easy way to do that is with ngrok. Set up an account, download the small executable, and configure it with the auth token you receive when you sign up, and then run it for port 8080:

This gives you a temporary public URL that will forward traffic to your local laptop.

Taking that URL (http://272a201c.ngrok.io in the example above), we register it with Telegram as the webhook for our bot:

The final piece to the puzzle is the actual bot code itself, which is going to receive the message sent to the Telegram bot and do something with it.

You can find the full code on GitHub, but the salient snippets are where we take an inbound message, process it, and reply:

Here’s the actual lookup against the ksqlDB REST API:

Now we amend our query from above to join to this table. Inbound events on the source stream get matched against this table, and if there is a match, a notification is created. Those of an RDBMS bent will recognise what I’ve just described as an INNER JOIN—if there is a match, then return a value.

The ksqlDB returns a dataset that looks like this:

We parse the dataset and send it to the Telegram REST API each time we receive a new result that matches an SSID in the table: 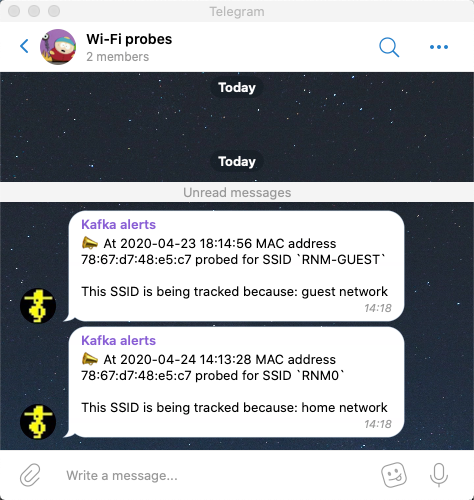 A ksqlDB table is backed by a topic in Kafka, and values can be updated and deleted as well as created. There are several ways we can populate this, including the example above using ksqlDB. In practice, you may want to populate such a table in other ways:

Events model the world around us, and we can build applications that respond to and reason about these using Kafka and ksqlDB. ksqlDB can filter a stream of events to drive an application for notifications, such as the example here to tell someone when a device scans for a given network. ksqlDB also supports materialised views, from which the state can be queried over the REST API.

We saw in this article how that can be used to take user input to look up information about a device’s behaviour on the network, such as the number of times it had scanned and for which network. The first example showed a simple lookup using a device’s MAC address. We then built on this to ingest data from MongoDB into Kafka using ksqlDB’s integration capabilities and joined this data so that we could look up devices using characteristics from the data in MongoDB, such as the device’s name.

To learn more, get started with ksqlDB today and head over to developer.confluent.io. You can find the full code for the Telegram bots on GitHub.