As we announced in Introducing Confluent Platform 5.2, the latest release introduces many new features that enable you to build contextual event-driven applications. In particular, the management and monitoring capabilities that we added to Confluent Control Center have evolved it into an indispensable tool for anyone working with Apache Kafka®. With the Developer License, all of the Confluent Platform features are free of charge for an indefinite duration in a non-production environment with a single broker.

In this three-part blog series, we’ll walk you through some of those new capabilities in Control Center:

Let’s dive into the first part: how Control Center integrates with Confluent Schema Registry allows you to manage and evolve schemas. It is useful to think about schemas as APIs, in the sense that applications depend on APIs and expect any changes made to APIs are still compatible and applications can still run.

Similarly, event streaming applications depend on schemas and expect that any changes made to schemas are still compatible and able to run. Schema evolution requires compatibility checks to ensure that producers can write data and consumers can read that data, even as schemas evolve. This is where Confluent Schema Registry helps: It provides centralized schema management and ensures schemas can evolve while maintaining compatibility.

With the enhanced integration with Confluent Schema Registry, you can do any of the following through the UI:

One benefit of Confluent Schema Registry is centralized schema management, which enables client applications to register and retrieve globally unique schema IDs. Let’s say you have a Java producer writing Avro data with the following schema file defined in its package:

Supposing the client produces data to a topic called transactions, it will first register the above schema with Schema Registry. You can inspect the transactions topic data right from Control Center, which will automatically retrieve the schema and then deserialize the Avro:

You can also view the schema itself, which is identical to the schema file defined by the client application. 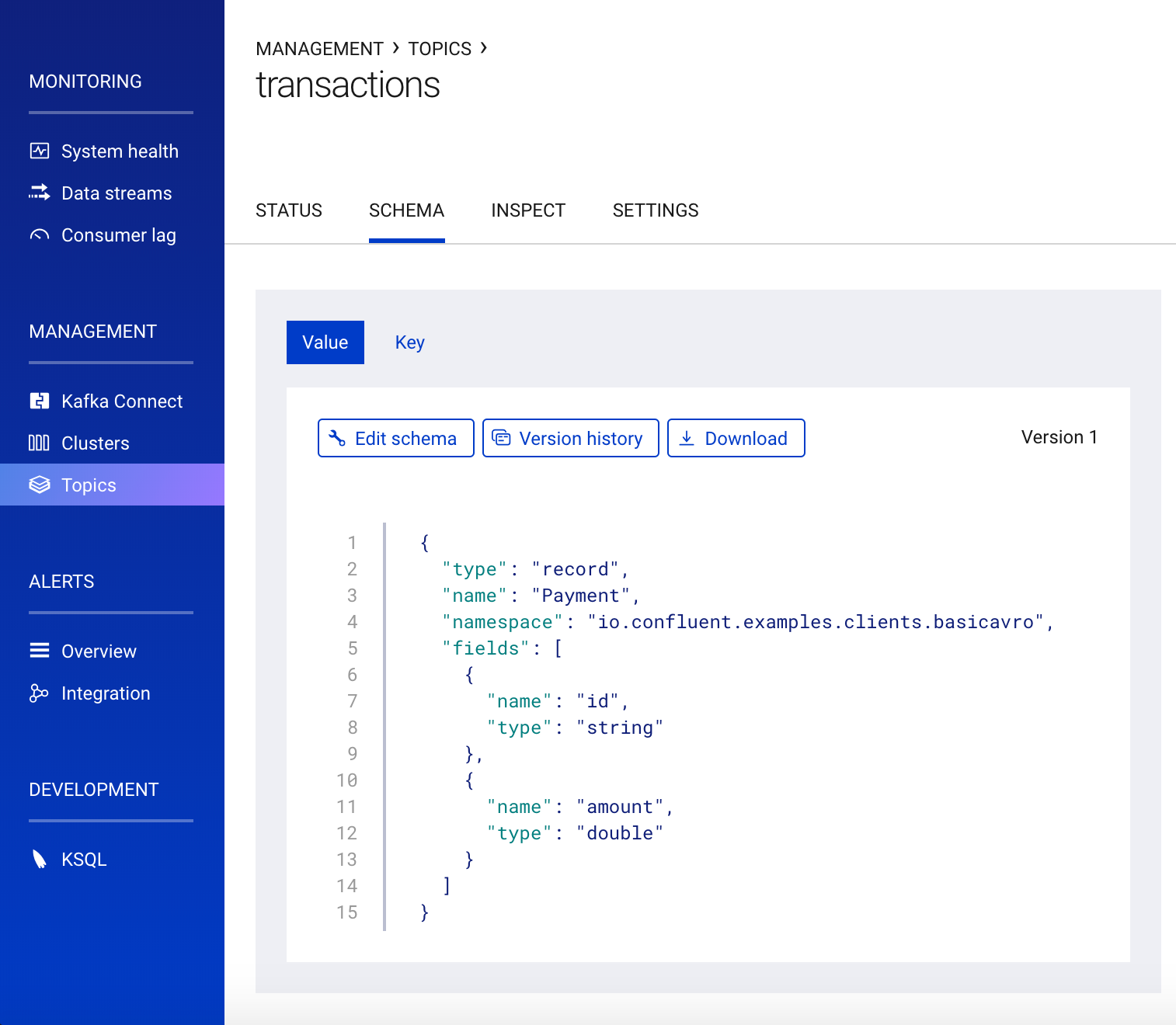 If you are going to edit a schema, you need to know that your changes are compatible with previous versions so applications don’t break. When you submit a new schema, Control Center will immediately check whether it obeys the compatibility policy. In the example output below, Control Center rejects the new schema because a new field was added with no default value, making it backwards incompatible. 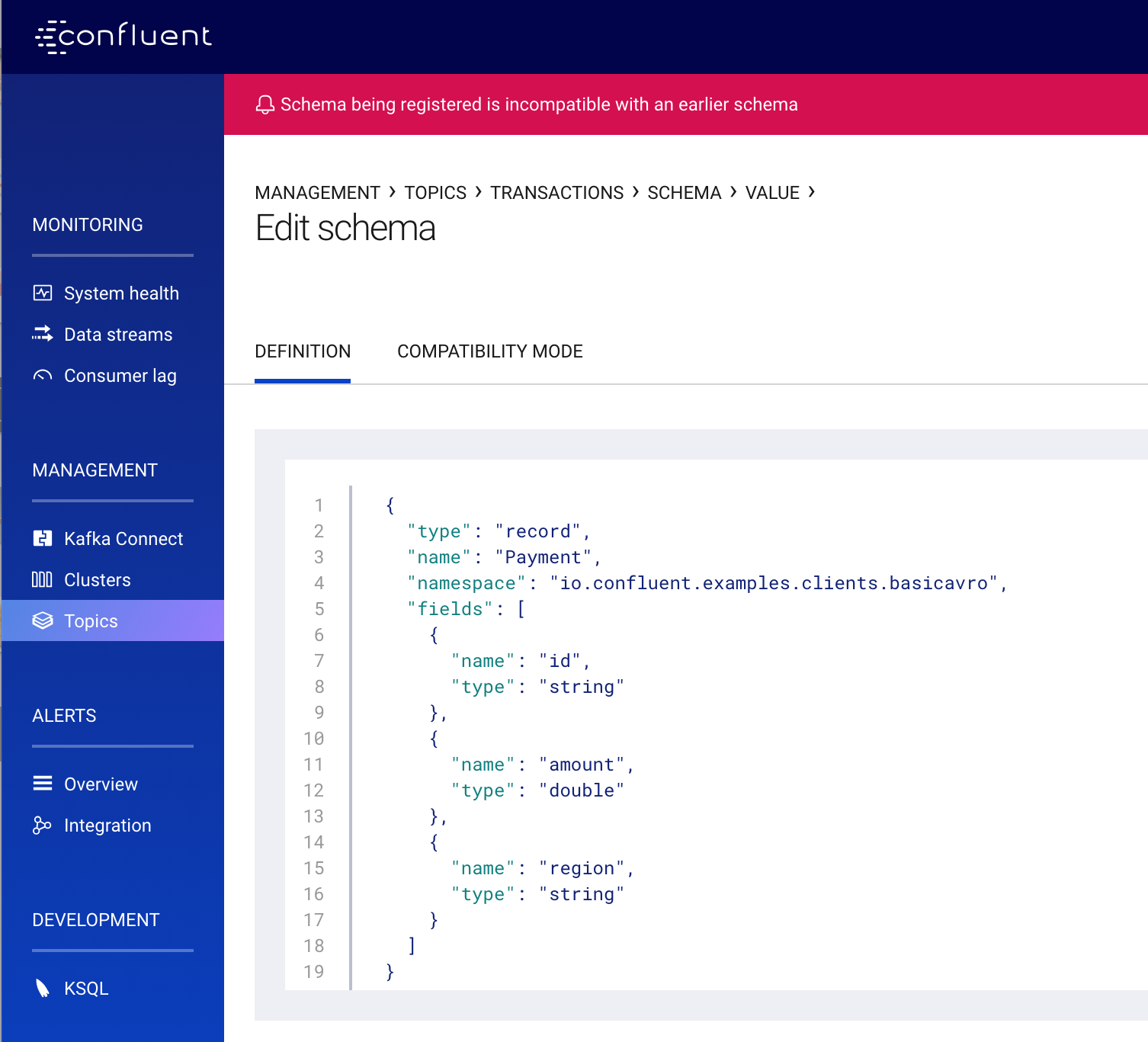 If you have evolved your schema through different versions, you can do a comparison to see the difference between those versions. This is useful for quickly discerning how schemas have changed and seeing which fields have been added or deleted.

Finally, you may want to change the compatibility policy to alter the rules by which schemas are allowed to evolve. The default compatibility policy is backwards, which means that consumers using the new schema can read data produced with the previous schema. The table below shows several other compatibility options, which the Schema Evolution and Compatibility documentation describes in more detail. 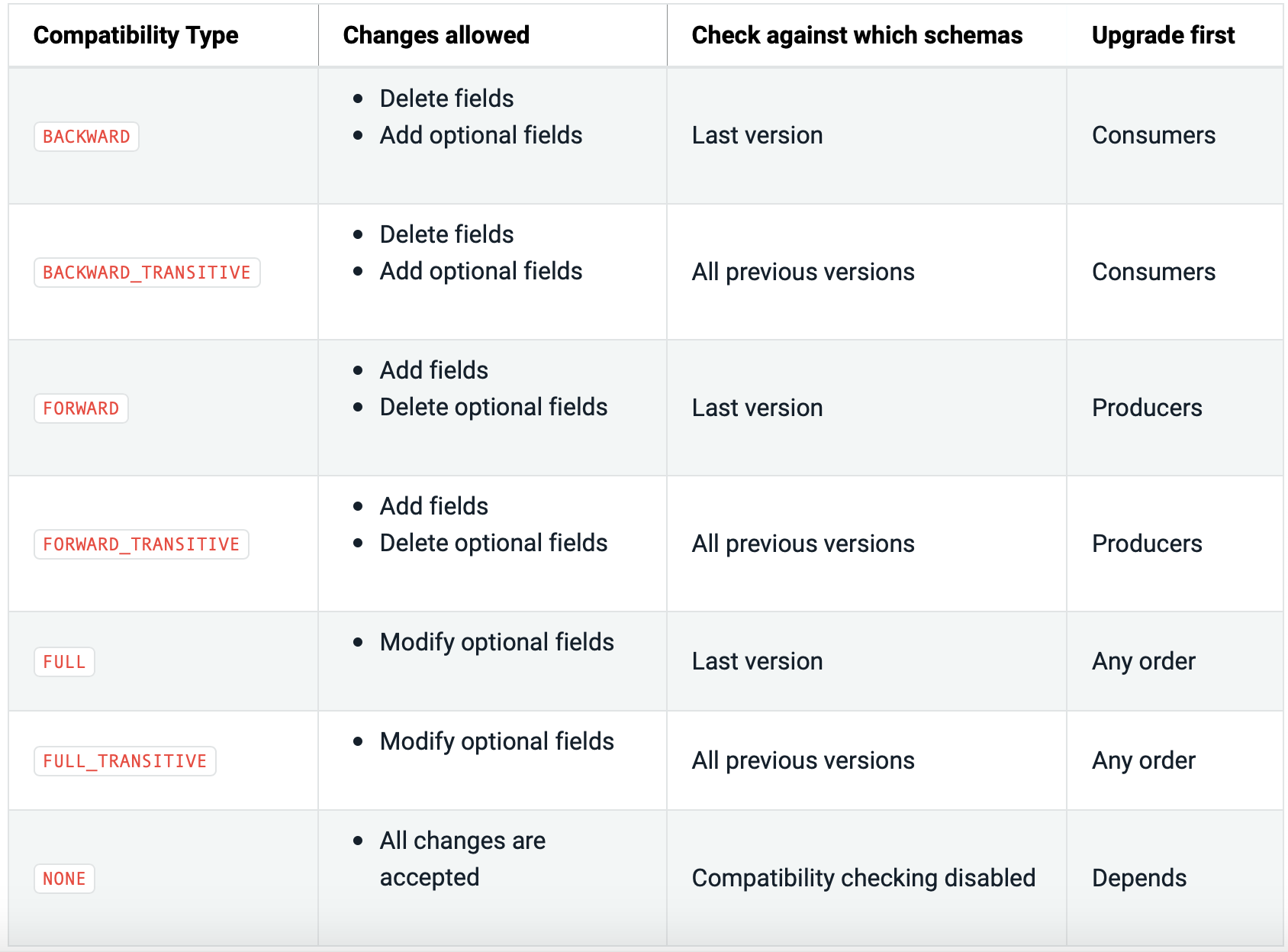