Osquery (developed by Facebook) is an open source tool used to gather audit log events from an operating system (OS). What’s unique about osquery is that it uses basic SQL commands against a relational data model that describes a device. It enables users to easily query important, low-level analytics on the OS. The SQL syntax makes it simpler for users familiar with SQL to look up OS information where it previously required knowledge of many terminal commands. The daemon that comes with osquery provides integration solutions to enable more modern techniques for publishing and searching logs for anomalous behavior.

Osquery is a powerful tool that can be used in modern security information and event management (SIEM) implementations to predict and detect anomalous behavior in real time using Confluent Platform or Confluent Cloud. For this use case, I’ll use the Confluent Platform to curate all streams of osquery traffic and send it to Apache Kafka®. Supported operating systems are Windows, macOS (OS X), CentOS, and FreeBSD. You can download/install osquery to follow along. The full working implementation is provided at the end which you can clone and modify yourself.

If you are new to osquery, it can be difficult to determine which queries to use to begin inspecting logs. Fortunately, osquery has published a set of packs, which are prewritten queries (with descriptions) that gather events related to a specific behavioral category. The osquery packs repository includes hardware-monitoring, incident-response, it-compliance, osx-attacks, unwanted-chrome-extensions, windows-attacks, etc. I will be using a few of these packs to send logs to Confluent Platform.

Osquery comes with a daemon (osqueryd) that can output its log results through components called logger plugins. Users have the option to build their own osquery logger plugin and recompile the project, but most users will use the default logger plugins packaged with it.

The following logger plugins are built into osquery by default: 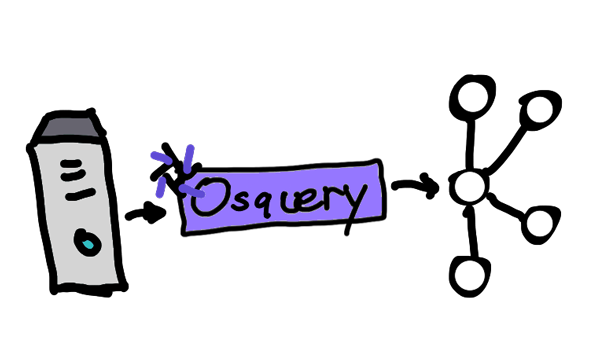 The osquery Kafka producer logger plugin is a simple way to submit logs to Apache Kafka or Confluent Platform. Since it doesn’t require a Kafka connector, there is no requirement for building a Connect cluster to simplify the architecture. However, there are limitations. It is not cloud ready and therefore cannot publish logs to Confluent Cloud. It only supports a limited set of tunable Kafka producer configurations, and several issues related to the Kafka producer have also been reported, which are well documented in the osquery GitHub repository. A better alternative is to use a custom osquery extension. 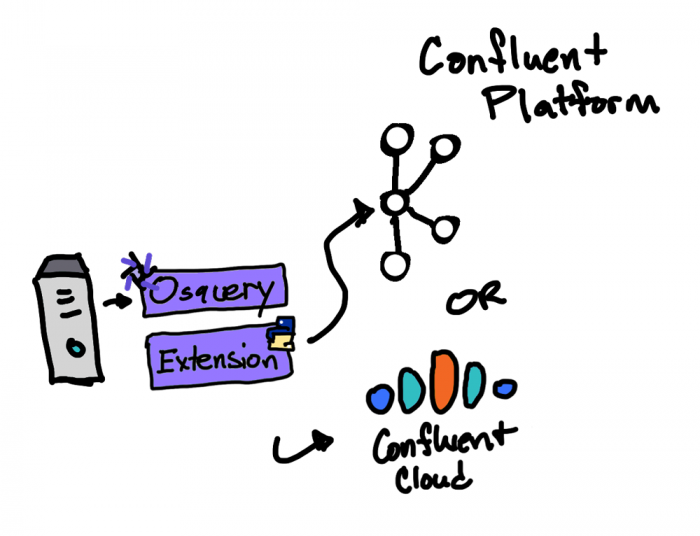 In osquery, you have the option to add a custom plugin in C++. This, however, requires a recompile of the source and may not be an option especially if the OS’s in the enterprise already have an existing osquery daemon installed and running. The extensions feature in osquery enables you to create plugins in different languages (i.e., Python) and load it into osqueryd using an Apache Thrift™ based API.

In this demonstration, I’ve written an extension in Python that uses librdkafka (the Kafka-native library for Python, C++, and .NET), which has the ability to publish osquery logs to Kafka, Confluent Platform, and Confluent Cloud without the issues and limitations that come with the prepackaged osquery Kafka producer logger plugin.

Cloud: You can easily configure the osquery Python extension to publish to Confluent Cloud just by adding the required Confluent Cloud properties. See this configuration for details.

Apache Avro™: By using librdkafka directly in your extension, you also have the option to convert the JSON messages that osquery produces into Avro and utilize Confluent Schema Registry. See GitHub for details.

change directory the location which builds the Confluent Platform

build and create the Kafka cluster

wait 30 seconds for everything to start

To send logs from your local computer, run the command below. You will need to create a similar configuration, assign it to the OSQUER_CONFIG environment variable, and pass it osqueryd.

Open a browser to http://localhost:9021. This will take you to Confluent Control Center. From there, proceed to the Kafka cluster and navigate to the topics page. You will see the list of topics, most of which are being populated by osquery and the Python extension. View the messages in the processes topic, which shows the list of processes running on each host.

Creating a stream from osquery events with ksqlDB 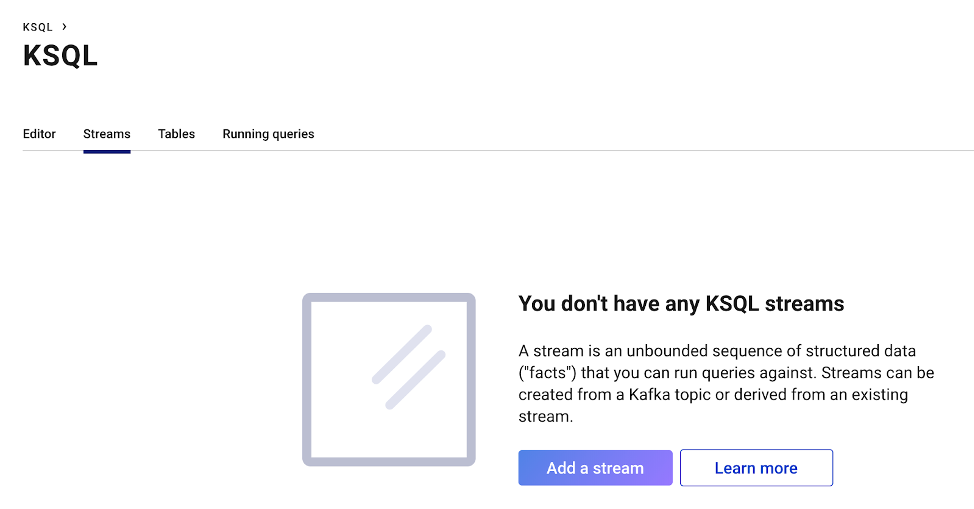 Navigate to the ksqlDB page above and create two streams from the topics processes and open_files by clicking on “Add a stream.” Select the two said topics and make sure you set “Encoding” to “JSON.” Keep the default values for the rest of the fields.

Execute the ksqlDB commands above to create two ksqlDB streams: proc and files. These queries will transform the data to choose only the fields and records we want to see, enabling us to join these two streams by pid.

The ksqlDB join statement above will find only records where a process has opened a file.

On host2, execute the following command to create a 1 GB file:

The results of the continuous ksqlDB join query will appear similar to what is shown below. 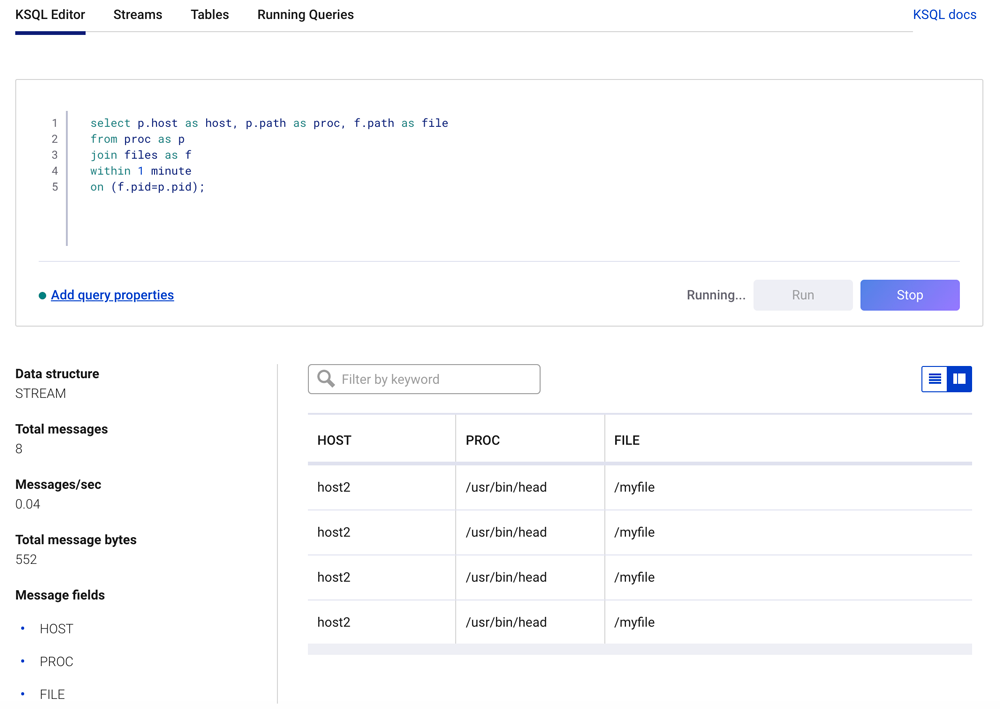 What we’ve done here is capture streams of event logs from osquery by running them as a daemon on multiple machines and publishing them to the Confluent Platform. We did this using the osquery Python extension and librdkafka, the native Kafka library for Python, Golang, .NET, and C++. We then created stream definitions in ksqlDB to join two osquery events: processes and open_files. This join captured the name of a process which opened a file and also the host on which this event occurred, ultimately providing rich context surrounding these events, which we displayed in Confluent Control Center.

Part 2 of this blog series will extend this use case to detect anomalous behaviors using machine learning. Until then, you can download the Confluent Platform to get started with a complete event streaming platform built by the original creators of Apache Kafka.