Part 1 of this series discussed the basic elements of an event streaming platform: events, streams, and tables. We also introduced the stream-table duality and learned why it is a crucial concept for an event streaming platform like Apache Kafka®. Here in part 2, we will take a deep dive into Kafka’s storage fundamentals. Notably, we will explore topics and—in my opinion, the most important concept in Kafka: partitions.

We’ll start with the most basic storage question: how do I store data in Kafka?

This article is the second in our series on Kafka fundamentals:

What are Kafka topics?

Topics belong to Kafka’s storage layer and are probably the most well-known concept of Kafka. They’re where your events are being durably stored for as long as you want, similar to a file in a distributed filesystem. The machines that store and serve the data are called Kafka brokers, which are the server component of Kafka (though they do a bit more than just storing and servicing data).

Conceptually, a topic is an unbounded sequence of serialized events, where each event is represented as an encoded key-value pair or “message.” In reality, there are a few additional fields like the event timestamp, but we’ll save those details for another time just to keep things simple. If you’d like to learn more, you can refer to the message format documentation. A topic is given a name by its owner such as payments, truck-geolocations, cloud-metrics, or customer-registrations.

You can configure various settings for a topic, including compaction (which we will cover in part 3) as well as data retention policies. Many people think of Kafka topics as being transitory, and indeed you can enforce a storage limit (e.g., a topic may only store up to 3 TB of events, after which older events will be removed) or a time limit (e.g., a topic should retain events for up to five years). But you can also store data indefinitely, more like a traditional database, by setting the retention to infinity so that events are retained forever. Companies like The New York Times do exactly this, using Kafka as the single source of truth and permanent system of record for their most critical business data.

Events are serialized when they are written to a topic and deserialized when they are read. These operations turn binary data into the forms you and I understand, and vice versa. Importantly, these operations are done solely by the Kafka clients, i.e., producing and consuming applications such as ksqlDB, Kafka Streams, or a microservice using the Go client for Kafka, for example. As such, there is no single “storage format” in Kafka. Common serialization formats used by Kafka clients include Apache Avro™ (with the Confluent Schema Registry), Protobuf, and JSON.

Kafka brokers, on the other hand, are agnostic to the serialization format or “type” of a stored event. All they see is a pair of raw bytes for event key and event value (<byte[], byte[]> in Java notation) coming in when being written, and going out when being read. Brokers thus have no idea what’s in the data they serve—it’s a black box to them. Being this “dumb” is actually pretty smart, because this design decision allows brokers to scale much better than traditional messaging systems.

In event streaming and similar distributed data processing systems, lots of CPU cycles are spent on mere serialization/deserialization of data. If you ever had to paint a room, you may have experienced that the preparation (moving furniture, protecting the floor with drop cloths, convincing your significant other that olive green is doubtlessly a more suitable color than that horrible yellow, etc.) can consume more time than the actual painting. Fortunately, brokers don’t need to deal with any of that!

Kafka topics are partitioned, meaning a topic is spread over a number of “buckets” located on different brokers. This distributed placement of your data is very important for scalability because it allows client applications to read the data from many brokers at the same time.

When creating a topic, you must choose the number of partitions it should contain. Each partition then contains one specific subset of the full data in a topic (see partitioning in databases and partitioning of a set). To make your data fault tolerant, every partition can be replicated, even across geo-regions or datacenters, so that there are always multiple brokers that have a copy of the data just in case things go wrong, you want to do maintenance on the brokers, and so on. A common setting in production is a replication factor of 3 for a total of three copies. 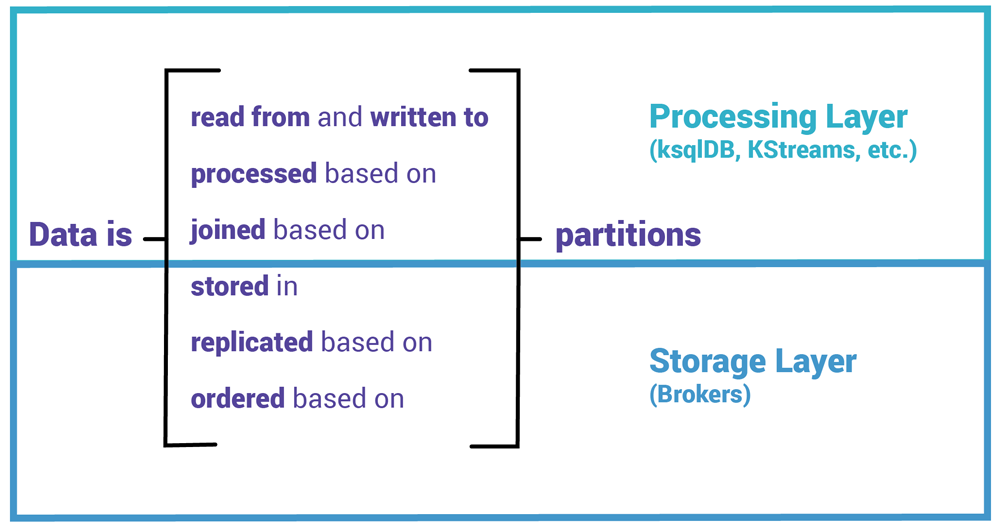 Figure 1. Partitions are a fundamental building block, because they make Kafka what it is known for: being distributed, scalable, elastic, and fault tolerant.

Kafka decouples event producers from event consumers, which is another reason Kafka scales much better than messaging systems. The producer is oblivious to who ends up reading an event, how often, or if at all. It could be zero, tens, hundreds, or even thousands of consumers. 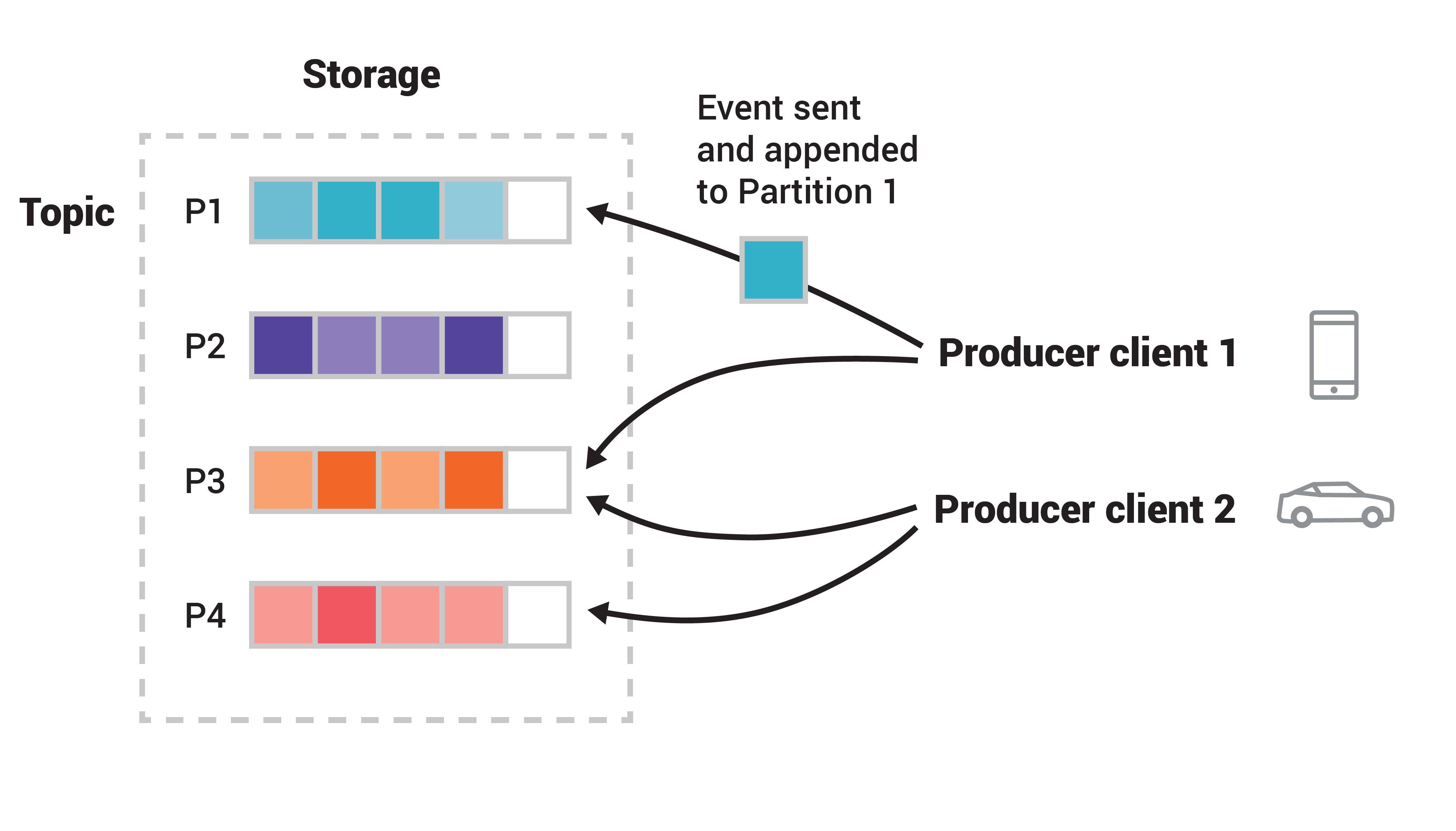 How to partition your events: Same event key to same partition

To give an example of how to partition a topic, consider producers that publish geo-location updates of trucks for a logistics company. In this scenario, any events about the same truck should always be sent to one and the same partition. This can be achieved by picking a unique identifier for each truck as the event key (e.g., its licensing plate or vehicle identification number), in combination with the default partitioning function.

However, there is another reason why partitioning matters. Stream processing applications typically operate in so-called Kafka consumer groups that all read from the same topic(s) for collaborative processing of data in parallel. In such cases, it’s important to be able to control which partitions go to different participants within the same group. We’ll explain this in more detail later on, but for now, it is sufficient to remember that proper partitioning of your events is an important design consideration when implementing a use case.

So, what are the most common reasons why events with the same event key may end up in different partitions? Two causes stand out:

It’s essential to be careful in these situations because sorting them out requires extra steps. For this reason, we also recommend over-partitioning a topic—using a larger number of partitions than you think you need—to reduce the chance of needing to repartition.

My tip: if in doubt, use 30 partitions per topic. This is a good number because (a) it is high enough to cover some really high-throughput requirements, (b) it is low enough that you will not hit the limit anytime soon of how many partitions a single broker can handle, even if you create many topics in your Kafka cluster, and (c) it is a highly composite number as it is evenly divisible by 1, 2, 3, 5, 6, 10, 15, and 30. This benefits the processing layer because it results in a more even workload distribution across application instances when horizontally scaling out (adding app instances) and scaling in (removing instances). Since Kafka supports hundreds of thousands of partitions in a cluster, this over-partitioning strategy is a safe approach for most users.

This completes the second part of this series, where we learned about the storage layer of Apache Kafka: topics, partitions, and brokers, along with storage formats and event partitioning. These are the shoulders on which we can stand for the third part of the series, where we will take a deep dive into Kafka’s processing fundamentals. We will move up from storing events to processing events by exploring streams and tables along with data contracts and consumer groups, and how all this enables you to implement distributed applications that process data in parallel at scale.