Robust data governance support through Schema Validation on write is now supported in Confluent Platform 5.4. Schema Validation enables the broker to verify that data produced to an Apache Kafka® topic is using a valid schema ID in Confluent Schema Registry that is registered according to the subject naming strategy. Enforcing data correctness on write is the first step towards enabling centralized policy enforcement and data governance within your event streaming platform.

Why centralized data governance is important

Data governance ensures that an organization’s data assets are formally and properly managed throughout the enterprise to secure accountability and transferability: different teams and projects within the organization can collaborate on the same contract of how data is generated, transmitted, and interpreted. Once an architectural luxury, data governance has become a necessity for the modern enterprise across the entire stack. It represents a mature set of well-established data management disciplines from the database world, but with event streaming systems, it takes on some new nuances:

It is important to enforce data governance policies in a single place. The best place is inside the event streaming platform itself, so that we don’t have to audit each client to make sure their application code has respected all the rules. In a large organization with lots of teams and products all leveraging the platform to build their real-time business logic, trying to enforce such data governance policies is extremely difficult.

Take schemas as an example. Today, nearly everyone uses standard data formats like Avro, JSON, and Protobuf to define how they will communicate information between services within an organization, either synchronously through RPC calls or asynchronously through Kafka messages.

For Kafka, all producers and consumers are required to agree on those data schemas to serialize and deserialize messages. In practice, a schema registry service such as the Confluent Schema Registry is used to manage all the schemas associated with the Kafka topics, and all clients talk to this service to register and fetch schemas. Using a schema registry service makes it easier to enforce agreements between clients while ensuring data compatibility and preventing data corruption.

However, these schemas are only enforced as “agreement” between the clients and are totally agnostic to brokers, which still see all messages as entirely untyped byte arrays. In other words, we cannot prevent unformatted data from being published to and stored in Kafka servers. Today, there is no programmatic way of enforcing that producers talk to a schema registry service to serialize their data according to the defined schema before sending them to Kafka.

Although the schema contracts between clients can at least prevent consumers from returning unformatted messages to users, a mature data governance mechanism requires that we enforce schema validation on the broker itself.

Schema Validation: How hard is it?

To allow Schema Validation on write, Confluent Server must be schema aware. 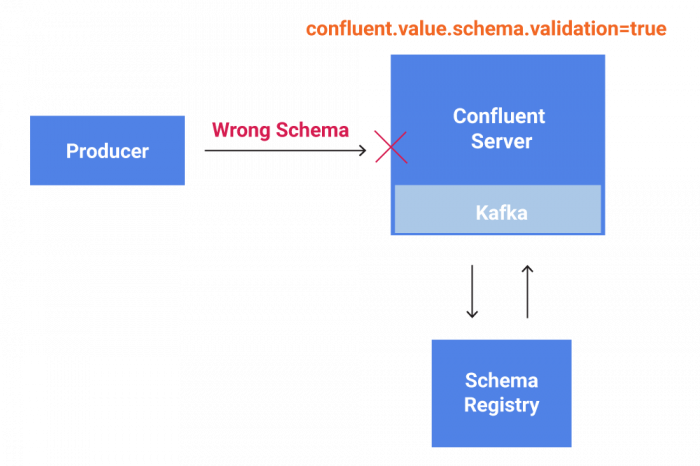 For Confluent Server to become schema aware, the broker has had to develop a direct interface to the Confluent Schema Registry, just like schema-managing clients have always done. We need to watch out for potentially significant overhead, as we are required to validate schema on a message-by-message basis.

The first step to checking every message’s schema is to add the confluent.schema.registry.url configuration parameter at the broker level—similar to what has been in use on the client side—to let brokers find the Confluent Schema Registry servers and fetch schemas from them. Then we allow users to turn on Schema Validation at the topic level with confluent.key.schema.validation and confluent.value.schema.validation. Setting these configurations to “true” indicates that schema IDs encoded in the keys and values of messages inbound to this Kafka topic will be validated against the Schema Registry service. We also extended the producer protocol to allow brokers to indicate which messages within the batch are rejected for schema validation reasons. Now when a producer gets an error indication in the producer response, the invalid messages will be dropped from the batch, and the callback indicates the error. For more details, please feel free to read KIP-467.

Get started in five minutes

To enable Schema Validation, set confluent.schema.registry.url in your server.properties file.

For example, this command creates a topic called test-validation-true with Schema Validation enabled on the value schema:

That’s it! If a message is produced to the topic movies that doesn’t have a valid schema registered in the Schema Registry, the client will receive an error back from the broker.

This work could not be done without my colleagues Tu Tran, Robert Yokota, Addison Huddy, and Tushar Thole.

Guozhang Wang is a PMC member of Apache Kafka, and also a tech lead at Confluent leading the Streams team. He received his PhD from Cornell University as part of the Cornell Database Group, where he worked on scaling iterative data-driven applications. Prior to Confluent, Guozhang was a senior software engineer at LinkedIn, developing and maintaining its backbone event streaming infrastructure with Apache Kafka and Apache Samza.