The new Protobuf and JSON Schema formats are supported in Schema Registry in addition to all other components of Confluent Platform 5.5.

Schema Registry also adds the notion of schema references, which models the import statement of Protobuf.

New serializers and deserializers are available for Protobuf and JSON Schema. The serializers can automatically register schemas when serializing a Protobuf message or a JSON-serializable object. In the case of the Protobuf serializer, it will even register all imported schemas, recursively.

The deserializers can be configured to return instances of either specific types or generic types (DynamicMessage for Protobuf and JsonNode for JSON Schema). With the proper configuration, they will even work with specific types in order to store multiple event types in the same Kafka topic.

The serializers and deserializers are available in multiple languages, including Java, .NET, and Python, with more to come.

Additionally, command line tools are available that wrap the serializers and deserializers. So getting started with Protobuf is as easy as:

Alternatively, you can use the Confluent CLI as follows:

Confluent REST Proxy has been extended with support for Protobuf and JSON Schema. Since Avro, Protobuf, and JSON Schema all have JSON representations for their payloads, a client can simply use JSON with the REST Proxy in order to interoperate with the different formats.

New serialization/deserialization classes (SerDes) have been added for use with Kafka Streams. These SerDes allow you to easily work with Protobuf messages or JSON-serializable objects when constructing complex event streaming topologies.

Users of ksqlDB can now specify either VALUE_FORMAT='PROTOBUF' or VALUE_FORMAT='JSON_SR' in order to work with topics that contain messages in Protobuf or JSON Schema format, respectively. Creating a ksqlDB table using Protobuf is as easy as:

Confluent Schema Validation, introduced in Confluent Platform 5.4, also works with schemas of the newly supported formats, so that schema validation is enforced at the broker for any message that is in Avro, Protobuf, or JSON Schema format.

In addition to the existing Avro support, Confluent Control Center now allows for straightforward visualization of topic data containing either Protobuf or JSON Schema payloads, and can also create and display schemas for both Protobuf and JSON Schema. 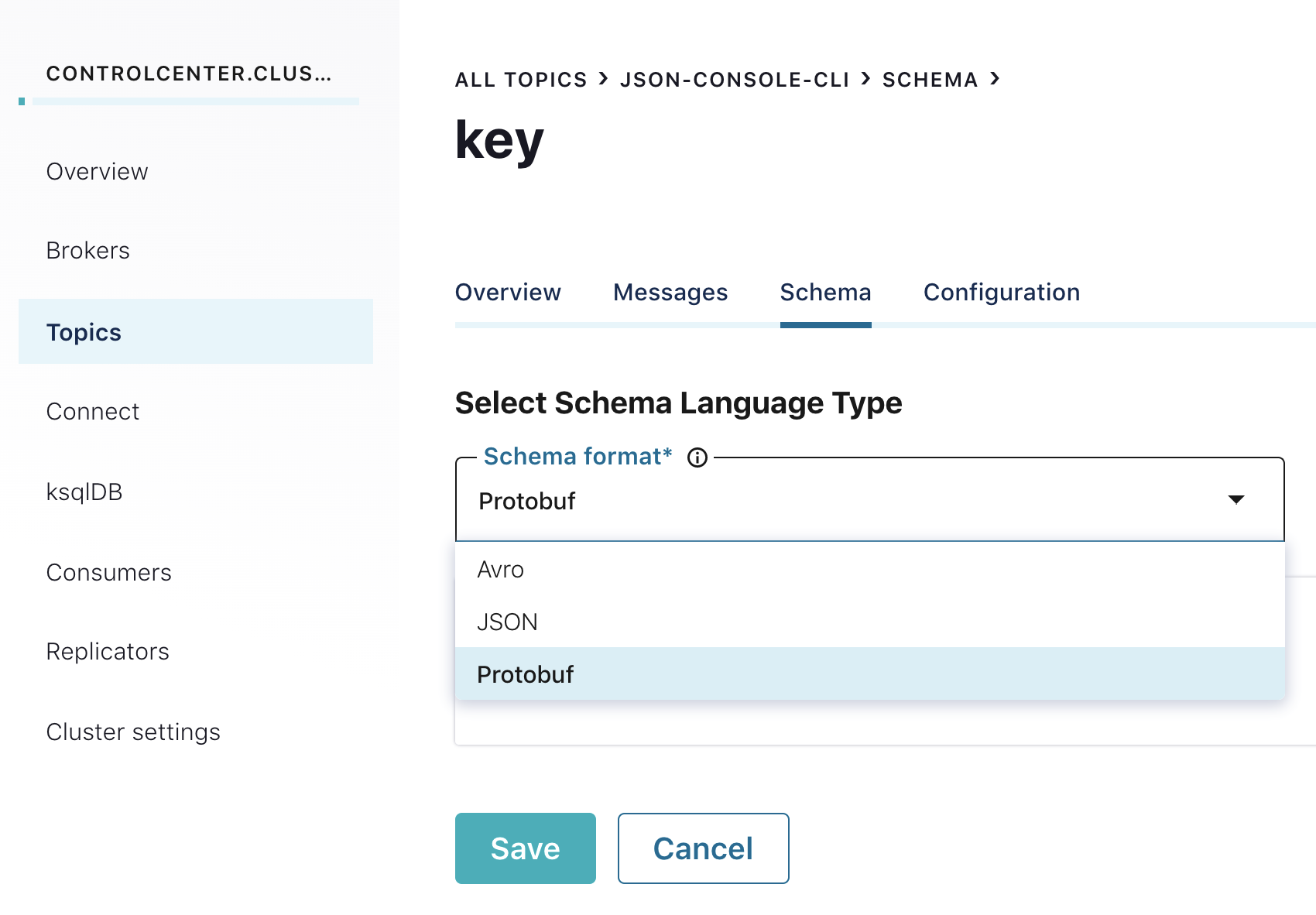 Add your own schema formats

In summary, with Confluent Platform, you now have the freedom to choose from the most popular formats: Avro, Protobuf, and JSON Schema. You now also have the freedom to add new formats to Schema Registry to suit your needs. We’ve been listening to our users, and we look forward to seeing what you’ll do with these new features in the future.