The vision for Confluent Cloud is simple. We want to provide an event streaming service to support all customers on their journey to an event-driven enterprise. Realizing that vision requires two things. First, an event streaming service that provides the reliability and scalability required by operations teams, but also delivers a lightweight and agile option for developers. Second, an ecosystem of developer tools around the streaming platform, which may be provided by the open source ecosystem or the leading public cloud providers. We introduced Confluent Cloud Enterprise a year ago, as the first step in realizing our cloud vision. Cloud enterprise enables enterprises in their transition to an event-driven organization, without the burden of operating Kafka at scale. We have been successfully running Confluent Cloud Enterprise for a year now, far exceeding the 99.95% availability SLA committed to our customers. Our customers are now benefiting from a fully-managed, private, secure, and high-performance Kafka- based streaming platform for their mission-critical applications. This has established the first milestone in our vision for Confluent Cloud.

But this initial introduction of Confluent Cloud Enterprise was only the first step towards realizing our vision. It did not cover the needs of development teams that are asking us for a self-service offering that can be provisioned in minutes, and charged based on actual usage. And it was only available on AWS, limiting access to leading public cloud services like Google’s BigQuery and TensorFlow.

While our enterprise customers are already leveraging the benefits of Confluent Cloud Enterprise in a simple and highly available managed service, developers wanting to build their applications on a Kafka-based event streaming platform continue mostly to operate all the parts of the platform themselves. This means you have to plan infrastructure to run Kafka and its various platform components before you can get started writing your application.The following examples might sound familiar to you: 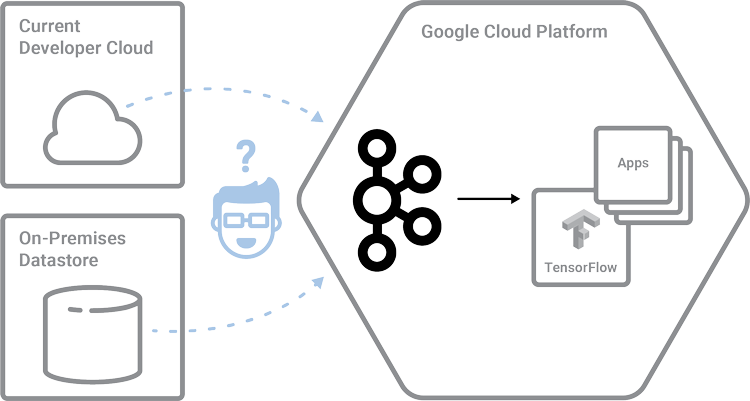 These examples expose some things that a cloud-native developer needs. Specifically:

Offering cloud independence and liberating developers from the operational burden of running a streaming platform has been a key focus of Confluent Cloud’s vision. To address this, you need a fully managed, low-cost, self-service, Kafka-based event streaming platform, and the freedom to access this service and your data on any public cloud provider.

It is precisely these pain points that we want to address. To this end, we are excited to announce the launch of self-service Confluent Cloud and availability on Google Cloud Platform.

Today, we are announcing the public availability of Confluent Cloud as a fully managed, low-cost, self-service, Kafka-based event streaming platform. Running a streaming platform isn’t easy, and Confluent Cloud frees you from that operational burden by offering a fully managed Apache Kafka service, built on the Confluent Platform. It is also perfect for projects anywhere from development to production applications. It offers the legendary performance of Apache Kafka, compatibility with open source Kafka tools and APIs, automatic upgrades to the latest version of Apache Kafka built at Confluent, and additional features that enable you to focus on actually building your application. If you’re a cloud-native developer (or just aspire to be one), then this is how Confluent Cloud helps you build your event-driven applications right away:

To that end, we are pleased to announce that we are also expanding Confluent Cloud to  Google Cloud Platform. This is a significant development because many Kafka developers and enterprise customers want to use  GCP services such as BigQuery and TensorFlow. The new Confluent Cloud on GCP enables users to combine the leading Kafka service with GCP services to support a variety of use cases. Let’s now take a look at how Bob and Mary can use Confluent Cloud on GCP to start focusing on their applications in minutes: 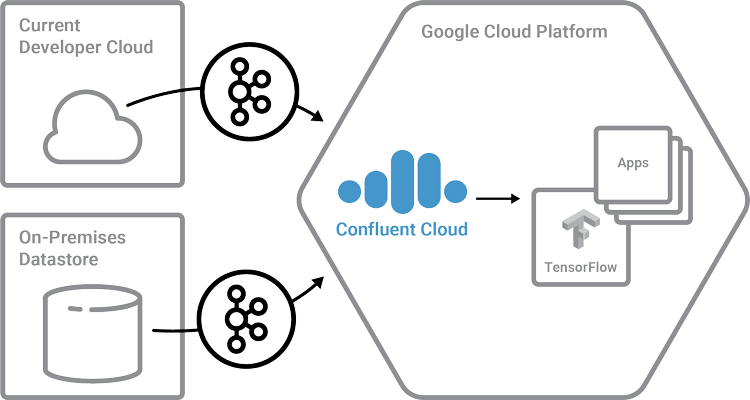 How can I get started with Confluent Cloud?

Below is a quick demonstration of how you can get started within minutes.

The twin capabilities of offering a self-service Apache Kafka for developers and access to a broad cloud ecosystem are highly significant developments for you, the Kafka developer. It now allows you to focus on leveraging Kafka without worrying about the operational burden of running one. It also offers a choice of technology and tools, that are best suited to the application. At a grassroots level, these are stepping stones that every developer has wanted. At Confluent, these capabilities help us provide you with the key cornerstones of every enterprise’s journey to become an event-driven organization—building applications that analyze data at massive scale, without an operational burden on the developer!