Hands on: Building a Streaming Application with KSQL

In this blog post, we show you how to build a demo streaming application with KSQL, the streaming SQL engine for Apache Kafka®. This application continuously computes, in real time, top music charts based on a stream of song play events.

Does this demo sound familiar? It should. Last year Confluent produced a similar demo application using the Kafka Streams API. Since then, Confluent has released production-ready KSQL. Users can choose between Kafka Streams or KSQL depending on the use case. Both enable developers to build real-time, scalable, fault-tolerant applications with exactly-once capabilities, for Confluent Cloud and on-premises Kafka deployments. Here we take the same music application concept and rewrite it using KSQL so you can compare and contrast the experience. 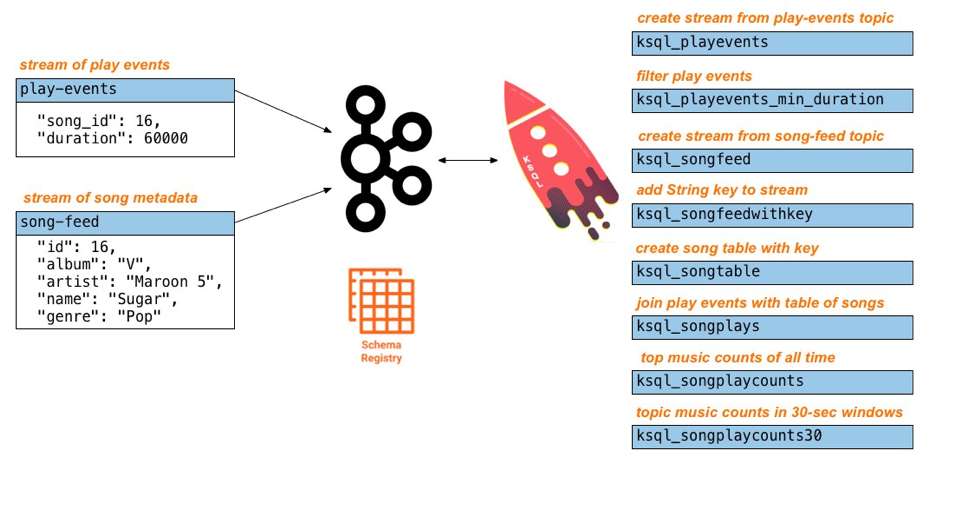 Note: This tutorial assumes you are running the KSQL music demo application in Docker. You may alternatively run this demo on a Confluent Platform local install just by running the start script.

In Docker’s advanced settings, increase the memory dedicated to Docker to at least 8 GB (default is 2 GB).

From the examples/music directory, start the demo by running a single command that brings up the Docker containers. This will take less than two minutes to complete.

Do not proceed until you see the below output in the logs of Confluent Control Center. 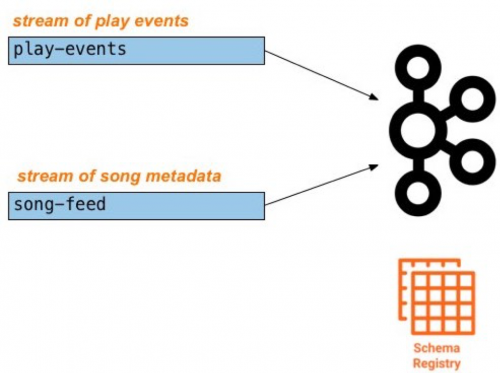 After you bring up the demo, use Google Chrome to navigate to Control Center at http://localhost:9021. Under MANAGEMENT select Topics, then scroll down and click on the topic and select Inspect. 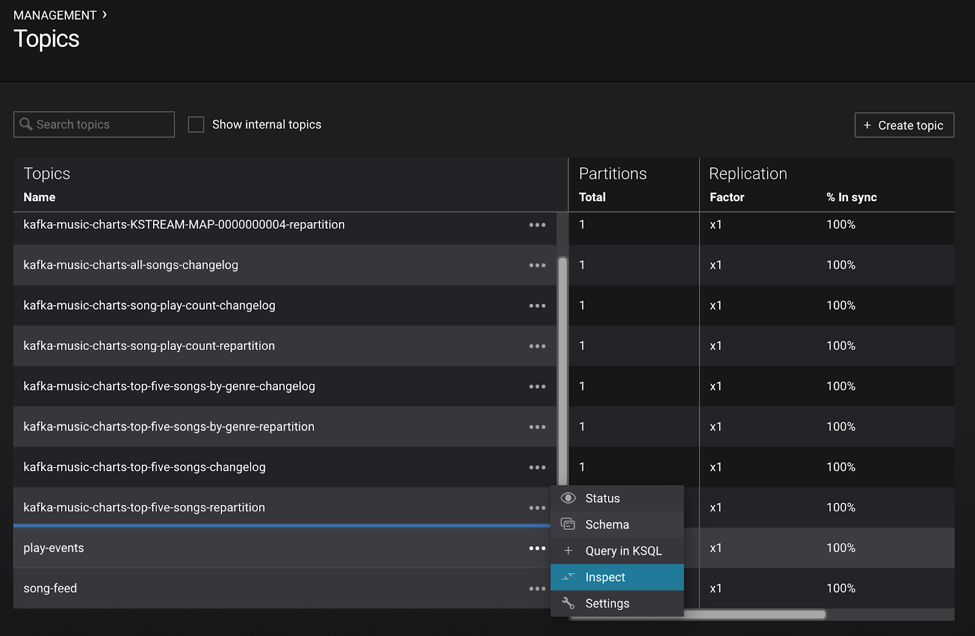 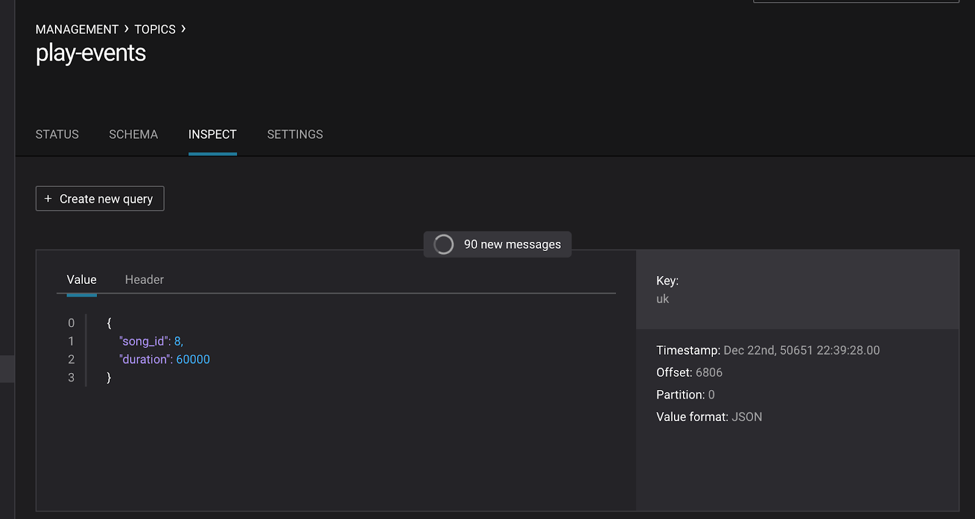 Or use the KSQL query editor in Control Center to inspect the topic PRINT "play-events";: 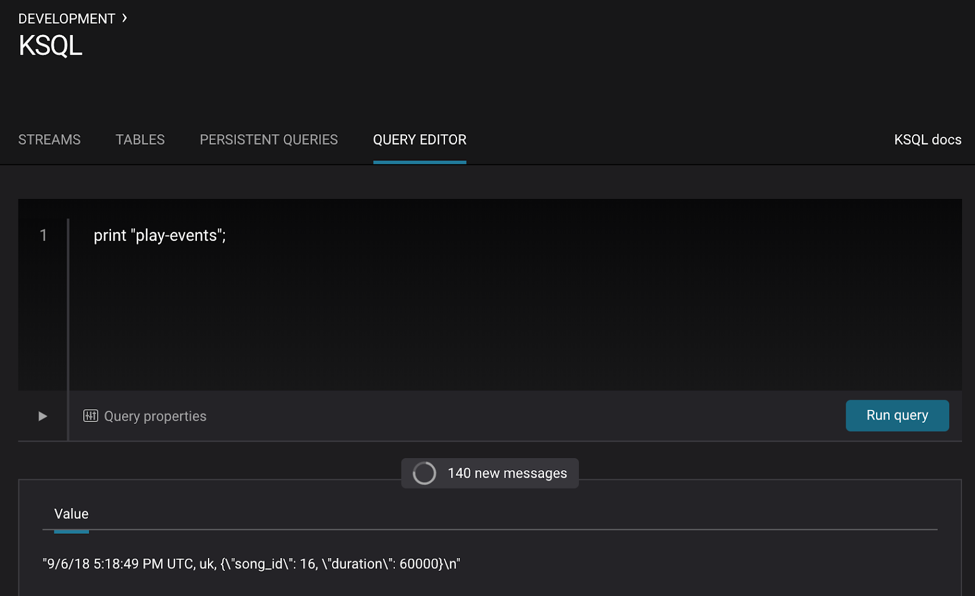 Inspect the topic song-feed by printing it with the FROM BEGINNING clause from the KSQL query editor in Control Center:

To review, the source data play-events and song-feed looks as follows:

Let’s create a new stream from the Kafka topic, beginning with the play-events topic. Register the topic play-events as a KSQL stream and specify that it is Avro format.

Note: Prefix the names of the KSQL streams and tables with ksql_. This is not required, but do it so that you can run these KSQL queries alongside the Kafka Streams API version of this music demo and avoid naming conflicts.

Register the topic play-events from the KSQL query editor:

Or, from the KSQL Streams view, select “Create Stream” and fill out the fields as shown below. Because of Control Center integration with Confluent Schema Registry, it automatically detects the fields song_id and duration and their respective data types. 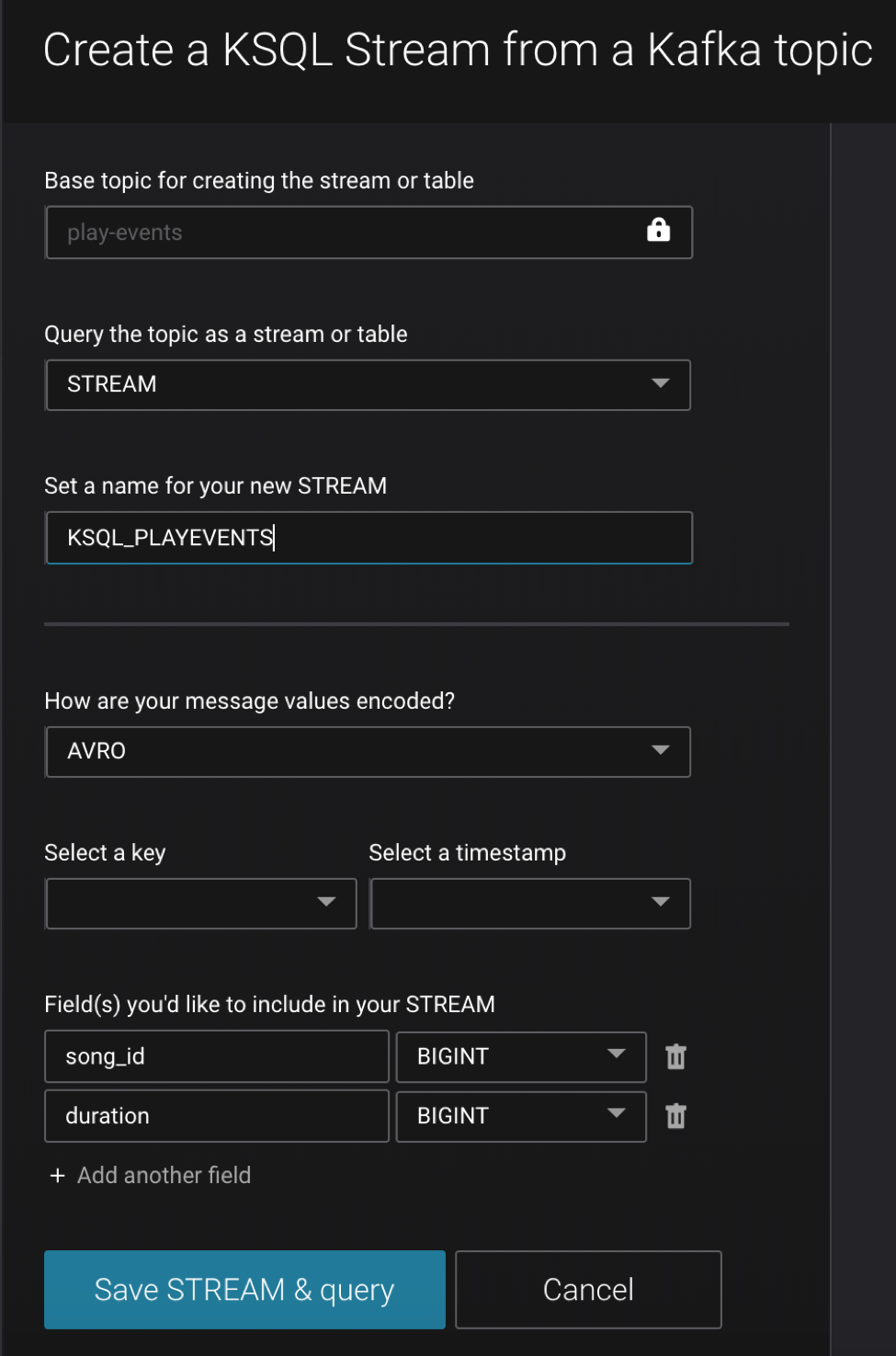 Do some basic filtering on the newly created stream ksql_playevents, such as qualifying songs that were played for at least 30 seconds. This is what you get from the KSQL query editor: 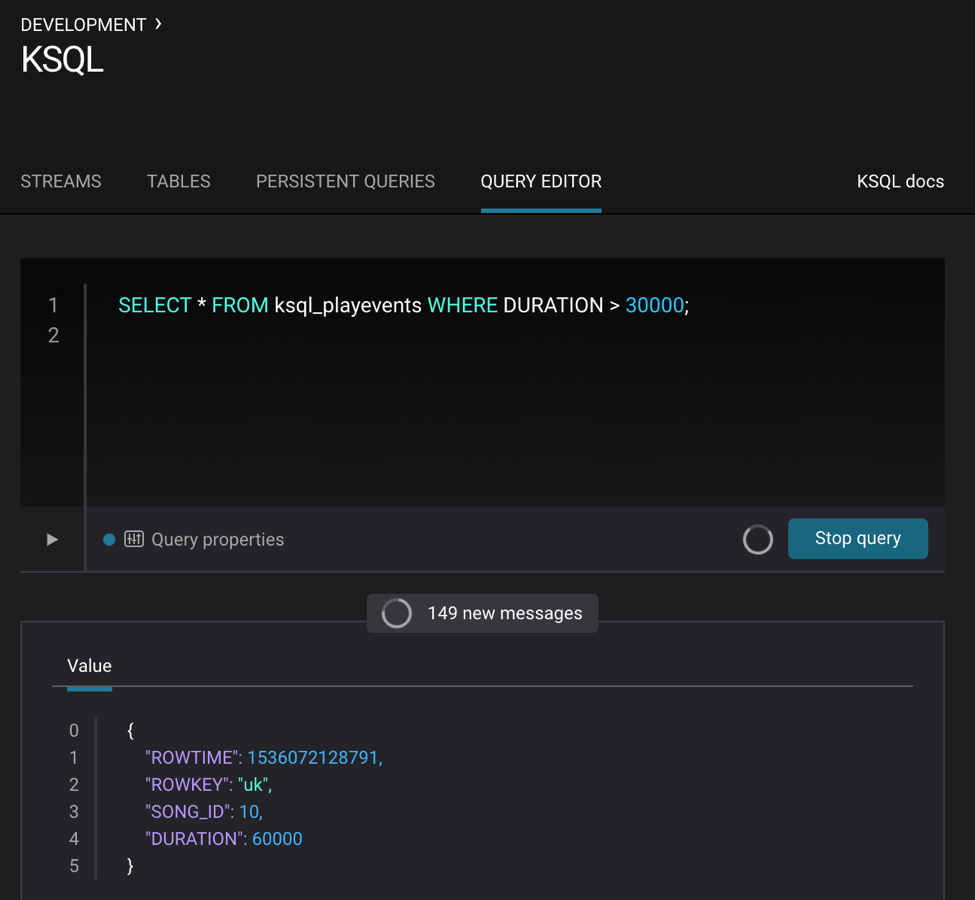 The above query is not persistent—it will stop if this screen is closed. To make the query persistent and stay running until explicitly terminated, prepend the previous query with CREATE STREAM <new stream name> AS. This is what you’ll see in the KSQL query editor:

Now this persistent query will show in the queries list.

Next, let’s work on the song-feed topic, which effectively represents a table of songs. Data in a KSQL TABLE are required to have key of type String. In this demo, the table can be keyed on the song’s ID for joins and aggregations to work on that table.

However the original Kafka topic has a key of type Long and the ID field is of type BIGINT. You can still create a TABLE with a few simple steps.

1. Create a STREAM from the original Kafka topic song-feed:

Then DESCRIBE the stream to see the fields associated with this topic and notice that the field ID is of type BIGINT: 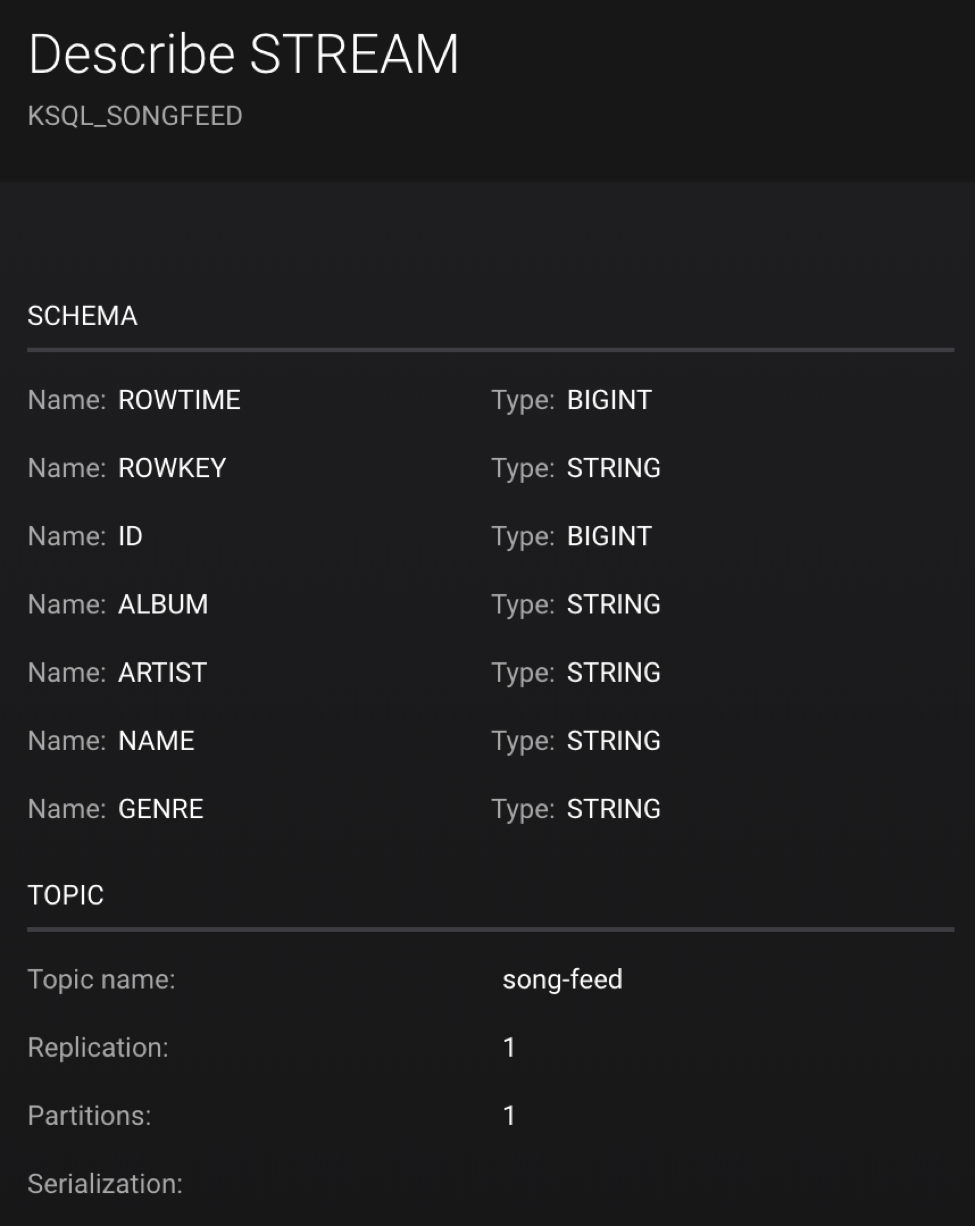 2. Use the PARTITION BY clause to assign a key and use the CAST function to change the field type to String:

3. Convert the above stream into a TABLE with the ID field as its key, which is now of type String. This TABLE is a materialized view of events with only the latest value for each key, which represents an up-to-date table of songs

Confirm that the entries in this KSQL table have a ROWKEY that matches the String ID of the song:

Join play events with the table of songs

At this point we have created a stream of filtered play events called ksql_playevents_min_duration as well as a table of song metadata called ksql_songtable.

Notice the addition of a clause 1 AS KEYCOL. For every row, this creates a new field KEYCOL that has a value of 1 ASKEYCOL can be later used in other derived streams and tables to do aggregations on a global basis.

Now you can create a top music chart for all time to see which songs get played the most. Use the COUNT function on the stream ksql_songplays that we created above.

While the all-time greatest hits are cool, it would also be good to see statistics for just the last 30 seconds. Create another query, adding in a WINDOW clause, which gives counts of play events for all songs in 30-second intervals.

Here is what you built

Congratulations, you built a streaming application that processes data in real time! The application enriched a stream of play events with song metadata and generated top counts. Any downstream systems can consume results from your KSQL queries for further processing. If you were already familiar with SQL semantics, hopefully this tutorial wasn’t too hard to follow. 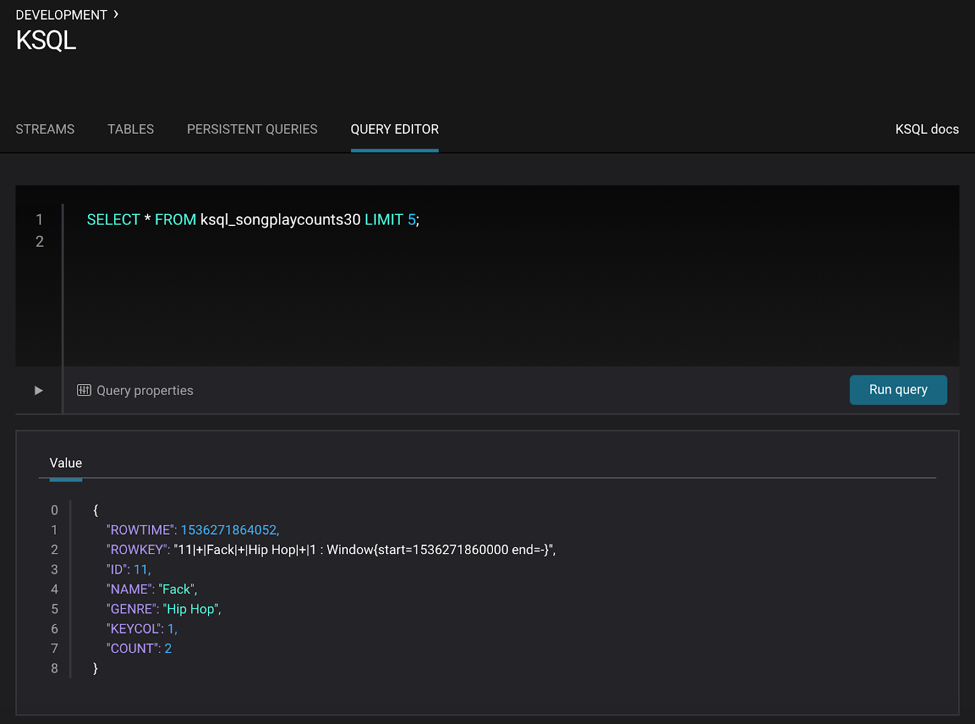 Learn more about what KSQL can do

Apache Kafka® is at the core of a large ecosystem that includes powerful components, such as Kafka Connect and Kafka Streams. This ecosystem also includes many tools and utilities that

We’re pleased to announce ksqlDB 0.14, one of our most significant releases of the year. This version includes expanded query support over materialized views, incremental schema alteration, variable substitution, additional