Organizations define standards and policies around the usage of data to ensure the following:

While data stewards are driving these data quality and data evolvability goals, they should also be thinking about how this works end to end in a production environment.

Assuming an Apache Kafka® based architecture, this blog post is for data stewards and solution architects who are targeting a Confluent Schema Registry service in a production environment. These production environments can leverage, and often mandate, security features including service HTTPS endpoints, Schema Validation, mTLS, and Role-Based Access Control (RBAC) for authorization, along with administrative tools and a monitoring and management UI.

Before jumping in, I highly recommend reviewing the following resources to get up to speed on Schema Registry fundamentals and to get hands-on experience:

cp-demo, which shows you how to configure a secured Kafka cluster along with many services including Schema Registry. cp-demo demonstrates how features work end to end across the entire platform. These core security features also correspond to current and upcoming features in the fully managed Schema Registry in Confluent Cloud.

In a production environment, it is strongly recommended to configure a Schema Registry HTTPS endpoint that forces all client communication to be encrypted. Configure the Schema Registry with the following parameters, with an optional truststore if ssl.client.auth=true:

To aid in the creation of the certificates used for TLS encryption and authentication, cp-demo runs a script that generates a self-signed certificate authority (CA). For each individual service, it creates certificates signed by the CA and a keystore and truststore (typically your security team would help create the certificates). The general workflow in the demo is as follows:

For more information on how to use keytool and openssl commands to create the TLS certificates for your Kafka services, refer to the Security Tutorial.

Schema Validation is a server-side data governance feature that gives you the ability to enforce some data correctness. With Schema Validation enabled, Confluent Server verifies that the data produced to a Kafka topic is using a valid schema ID in Schema Registry that is registered according to the subject naming strategy.

Thus, when Schema Validation is enabled on the broker, it will first validate any message that a Kafka client attempts to produce to a Kafka topic that has Schema Validation configured. If the message does not use any schema at all (e.g. uses String format), references a schema ID that does not exist in Schema Registry, or tries to use a schema that does not map to the subject naming strategy, then the Kafka broker will reject the message:

When a client communicates to Schema Registry’s HTTPS endpoint, Schema Registry passes the client credentials to Metadata Service (MDS) for authentication. MDS is a REST layer added to the Kafka broker within Confluent Server, and it integrates with LDAP so that it can authenticate end users on behalf of Schema Registry and other Confluent Platform services. As demonstrated in cp-demo, clients must have predefined LDAP entries.

Once a client is authenticated, it is critical to enforce that only those who are authorized have access to the permitted resources. Schema Registry has long supported ACL authorization, but since last year, it additionally supports Role-Based Access Control (RBAC). RBAC provides finer-grained authorization and a unified method for managing access across Confluent Platform, including services such as Kafka Connect, Confluent Control Center, and ksqlDB. For these reasons, cp-demo uses Schema Registry with RBAC. MDS has centralized role bindings that define the set of actions (roles) users and groups can perform on which resources. If a client has no role bindings authorizing them access to the subject in Schema Registry, then the client is not granted access.

The combined authentication and authorization workflow for a Kafka client connecting to Schema Registry is shown in the diagram below. Notice that the client only communicates with Schema Registry for the request to access its subjects, and the authentication and authorization happens on the backend. For authentication (green boxes below): MDS communicates with the LDAP server to verify that the user is in LDAP, the search filters allow its return, and the user’s password is valid. For authorization (blue boxes below): MDS verifies the RBAC role bindings that grant the client access to the subjects. 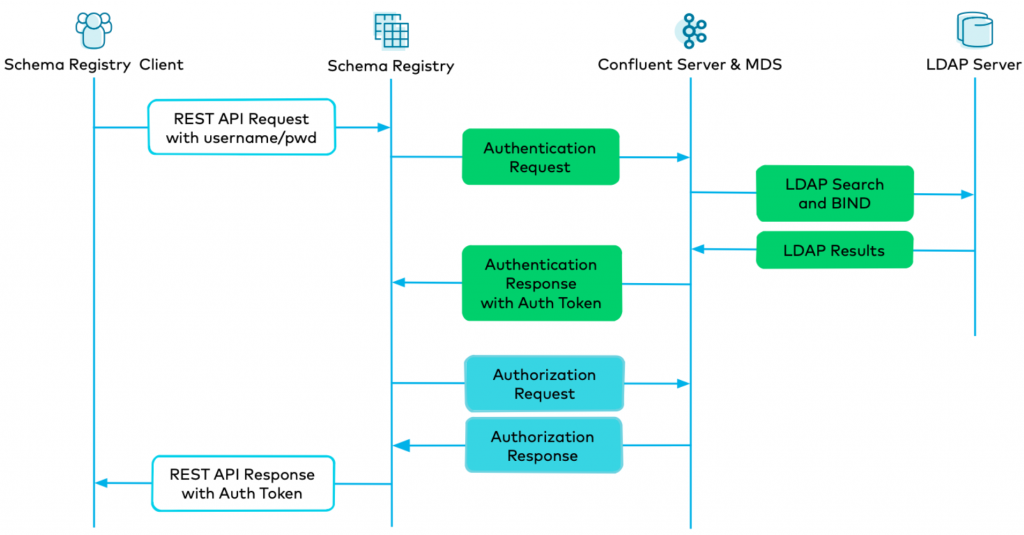 It is beyond the scope of this blog post to walk through the entire administrative workflow to configure MDS, integrate the brokers with LDAP, configure Schema Registry, etc., because there are many configuration commands, plus required role bindings. However, cp-demo is kept up to date with the latest Confluent Platform release and covers all the required configurations, providing a full end-to-end deployment guide.

Kafka clients—the end users of the Schema Registry—need access to the subjects, schemas, and schema IDs. These clients are any Kafka producer, Kafka consumer, Kafka Streams application, administrative tool, or service producing or consuming Kafka data that is serialized or deserialized with schemas stored in Schema Registry. When your deployment has the aforementioned encryption, authentication, and authorization security features, how should the Kafka clients be configured to communicate with the secured Kafka cluster and Schema Registry?

Finally, there must be a role binding that grants the client permission to access the Schema Registry subject(s). The example below grants the ResourceOwner permission (which encompasses read, write, create, and delete) to the Schema Registry Subject resource that begins with the name ${TOPIC}. Because the command uses the --prefix argument, it encompasses the subjects for both the key and the value: ${TOPIC}-key and ${TOPIC}-value.

Some Confluent Platform services also have embedded Kafka clients that need to be authenticated and authorized for Schema Registry. For example, underneath ksqlDB is a Kafka Streams application that embeds producers and consumers. Likewise, source connectors use embedded producers and sink connectors use embedded consumers. Therefore, for any service with embedded Kafka clients to use Schema Registry, they need at minimum the same set of five configuration parameters (though the prefix may vary depending on the service) plus the respective RBAC role bindings.

REST proxy also integrates with Schema Registry so that the end clients can produce and consume data with schemas. The cp-demo tutorial demonstrates which role bindings clients need to access the Schema Registry subject, Kafka topic, and consumer group. 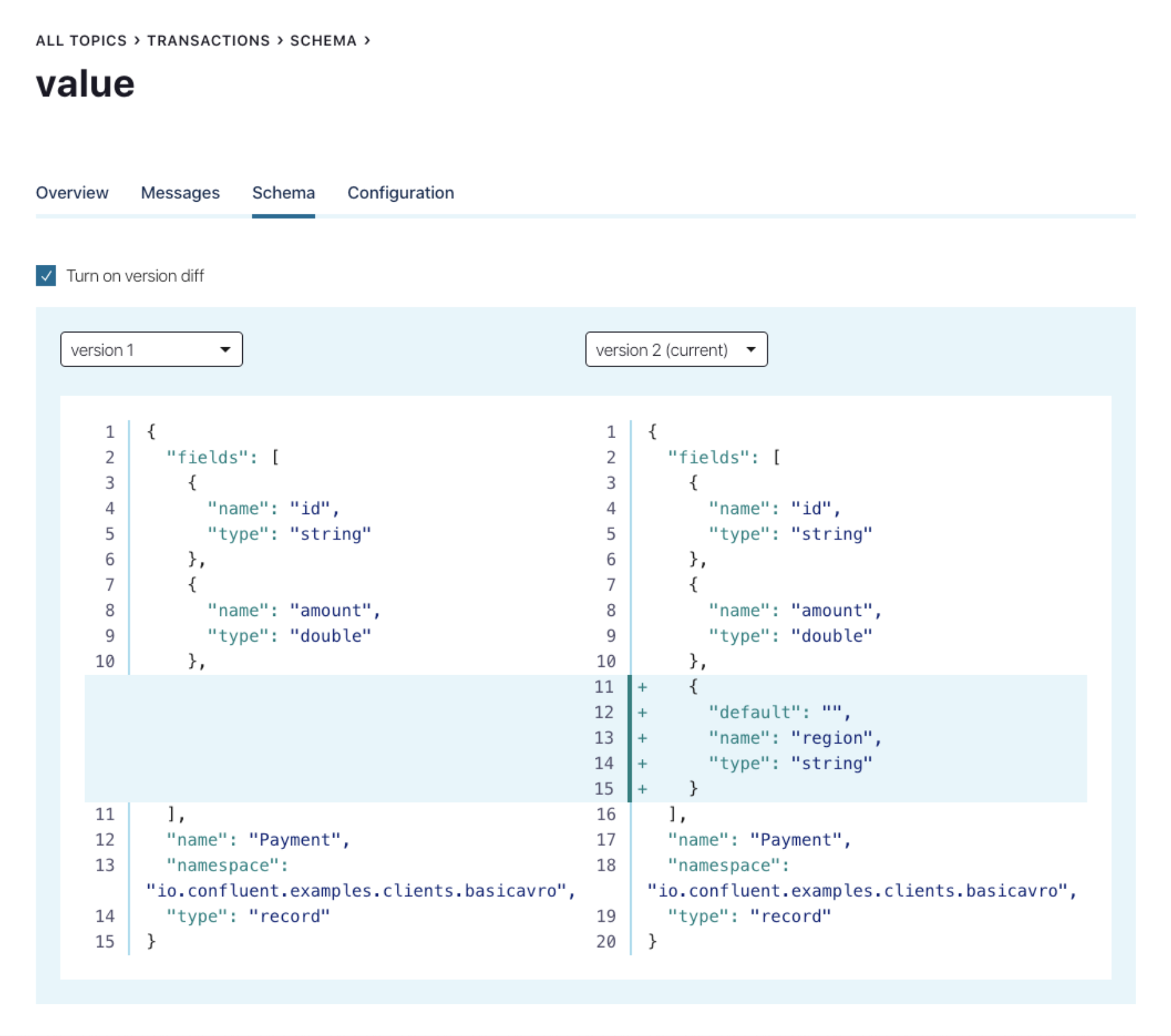 If you do not use Control Center, you can query the Schema Registry’s REST interface. Like any other client, you have to provide appropriate TLS certificates and authentication credentials. In the case of cp-demo, to register a new schema, the query would resemble: