The following post is a guest blog from Tushar Sudhakar Jee, Software Engineer,  Levyx  responsible for Kafka infrastructure. You may find this post also on Levyx’s blog.

As part of Levyx’s strategy to “plug into” and enhance the performance of leading Big Data platforms, the company recently had its Apache Kafka® connector based on Xenon™ certified by Confluent. In this blog we introduce Xenon, describe our connector, and showcase performance of connector on a commodity on-prem server with SSD ingesting 470GB data at 3.5 million messages per second on a 10GbE network.

Xenon is a low latency and scalable data analytics engine designed to manage the retrieval, processing, and indexing of very large datasets. Xenon is designed to make efficient use of many core processors and SSD/NVM based storage. The driving goals behind Xenon are to achieve optimal I/O performance and compute efficiency. For optimal I/O performance, Xenon bypasses the file-system and directly performs flash friendly I/O to SSDs/NVMs, thereby reducing the I/O latency (important for transactional operations) and saturating the I/O bandwidth of storage devices (important for analytics).

On the compute side, Xenon uses just-in-time compilation (in C) to generate on-the-fly analytics code and executes that code on bare metal to achieve the lowest latency and highest throughput possible. The generated code performs direct I/O to the PCIe SSD to reduce read and write amplification. Xenon uses the latest Instruction Set Architecture (ISA), lock-free data structures, and multi-core design principles to maximize system resource utilization and thereby reducing the overall node count. Reducing the number of servers is beneficial not only from a cost standpoint (i.e., a reduced cloud bill), but also simplifies cluster management. The figure below shows the overall flow of data from Kafka to our connector and into Xenon. Note that while a single Xenon node is shown for the sake of clarity, Xenon is distributed and hence can be scaled to many nodes. 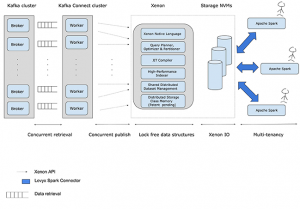 Xenon use case and capabilities

Consider using Xenon if you run analytics on very large datasets requiring a big cluster of nodes with substantial memory in order to meet your latency and throughput requirements. Xenon can place your large datasets on SSD at considerably less cost and perform the same analytics operations with fewer nodes. Moreover, Xenon datasets are shareable, making it ideal for use in environments where a single repository of data is used by multiple teams and applications.

Capabilities of Xenon include:

This post highlights the benefits of using Confluent certified Levyx Kafka connector, (a.k.a., Kafka-Connect-Xenon™), for streaming data from Kafka into Xenon — a high performance storage and analytics engine. The integration into Kafka uses the Kafka Connect framework. Besides the Kafka connector’s performance, storing data in Xenon includes benefits such as multi-tenancy via a connector interface to Apache Spark. In the rest of this article, we describe:

Besides this, the Xenon connector offers the following features:

A quickstart guide including high level design and code examples are available on Levyx Kafka-Connect-Xenon Github. The supported data format and types are outlined below:

The figure below depicts the flow of data between a Kafka cluster and Kafka-Connect-Xenon. Details on deployment and getting started using a docker based installation is documented on our GitHub page. Xenon being a complete data storage and analytics platform has its own configuration parameters that can be tuned for optimal performance, details of which are omitted for brevity. 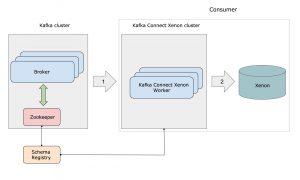 The metrics we used for monitoring performance and status of Kafka-Connect-Xenon include CPU utilization, Memory utilization, Network utilization, Java heap size on each Kafka Connect API worker and connector status. Overall, the workers balance the division of tasks evenly but there might be an imbalance of workload on workers with varying loads on topics.

The graphs below, generated using Grafana on the Consumer machine highlight some key benefits of Kafka-Connect-Xenon  in action:

Xenon is designed to be a high performance storage and analytics engine. Therefore, it is natural to expect the same level of performance with Kafka-Connect-Xenon. We show the performance of the connector running on commodity servers and NVMe SSDs for storage. The setup in this example includes two machines running the broker and the connector. The system details are of the two machines are as follows:

The goals are to measure the following while running the ingest phase:

Note that we can achieve multi-million ingests on commodity servers while persisting the data. Due to the design of our connector and Xenon, the bottleneck here is not the software. We see 60% CPU utilization while the 10 GbE network becomes the bottleneck. With a better network, this can further go up to ~5.6 Million messages per second before CPU becomes the bottleneck. A snapshot of system statistics measurements are below (CPU, Network, Memory, and IO). 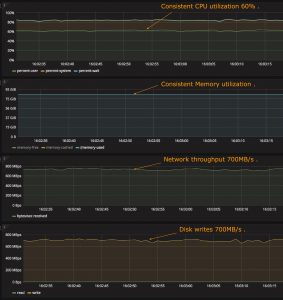 For further details on the Xenon Connector, please contact info@levyx.com.