This blog post walks through an end-to-end demo that uses the Confluent Operator to deploy Confluent Platform to Kubernetes. We will deploy a connector that watches for commits to a GitHub repository and then write those commit messages to an Apache Kafka® topic in Confluent Platform. The connector will authenticate with GitHub using secret credentials that are securely stored in HashiCorp’s Vault and accessed by the connector in a highly secure and automated manner.

Modern systems consist of services and users connecting with each other over a network, whether it’s:

Securing communications between applications and services requires strong protection and minimal sharing of credentials. Each component in a distributed system needs to be able to access their limited subset of secrets and credentials at runtime without risking exposure.

The most simplistic way to ensure that a service has the credentials it needs to connect to other services is for a developer or operator responsible for the service to find the secret credential information, paste it into a configuration file, and start the service process on a machine where the configuration file is present. However, this workflow presents many problems:

Using the Confluent Operator, you can deploy Confluent Platform on Kubernetes and configure connectors such that the sensitive configuration credentials needed for the connectors are stored only in HashiCorp Vault.

In this demo, we’ll set up a connector that watches all commits on a GitHub repo and writes the commit messages to a Kafka topic in Confluent Platform. The connector will need GitHub credentials to be able to watch for commits to the repo. The connector will be configured via a request to the Kafka Connect REST API, but the request payload will not need to contain any sensitive credentials because they will be securely delivered to the connector’s runtime environment via a seamless integration between Confluent Operator and HashiCorp Vault. 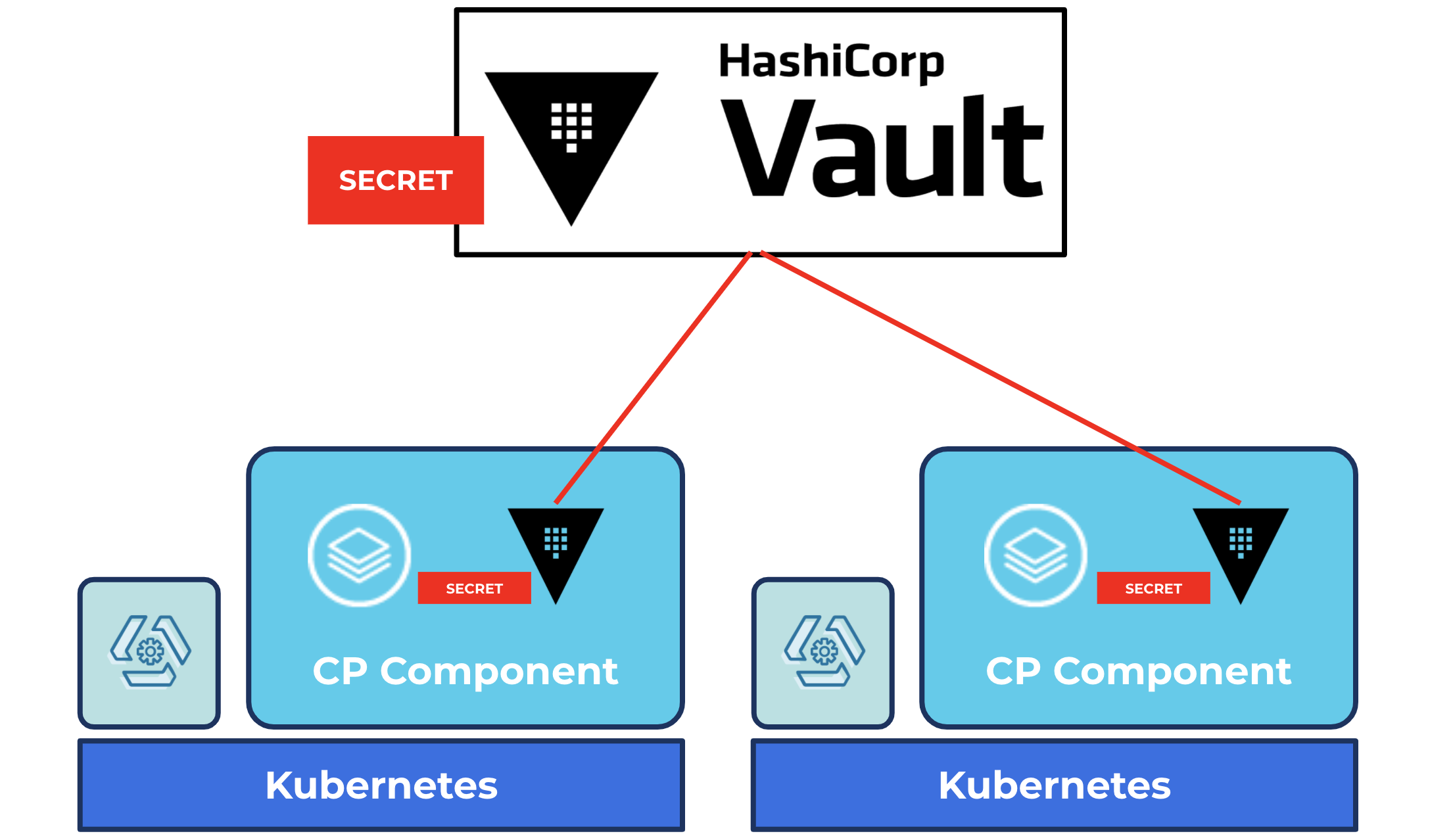 The following steps use:

For this demonstration, we are using a seven-node GKE cluster on version 1.18.12-gke.1210; each node is an e2-medium. For the most part, this is a default installation with no specific configuration except the node count. The equivalent gcloud command to launch the cluster is this:

Then configure your command line to be able to connect to your GKE cluster:

If you’ve never worked with Vault, it might be worth going through this tutorial end to end, and then coming back to this demo. The following instructions are largely based on that tutorial, with some differences, such as deploying to GKE instead of minikube (local laptop Kubernetes). In addition, we’ll be putting in a GitHub access token for the Connect workers instead of the example deployed in that tutorial.

Note that we created a namespace called hashicorp. Later, we’ll create a namespace called confluent to deploy Confluent Operator and Confluent Platform. This will help with security and isolation. In production, you will likely deploy Vault to a completely different Kubernetes cluster and you may deploy many instances of Confluent Platform to many Kubernetes clusters, all of which can fetch credentials from the same central Vault.

Next, use the Helm tool to fetch HashiCorp’s Helm charts:

Now, we can deploy Vault to our hashicorp namespace using the Vault Helm Chart. We’ll deploy it in developer mode to keep this demo simple and easy:

Next, we’ll make sure that workloads running on this Kubernetes cluster, such as the Connect workers we’ll soon deploy, can authenticate with Vault. In a future step, we’ll store a credential in Vault and configure permissions so that only the Connect workers can access it.

The previous command opened an interactive shell session within the Vault container. The next two commands are executed from within that shell session.

Instruct Vault to treat Kubernetes as a trusted identity provider for authentication to Vault:

Configure Vault to know how to connect to the Kubernetes API (the API of the very same Kubernetes cluster where Vault is deployed) to authenticate requests made to Vault by a principal whose identity is tied to Kubernetes, such as a Kubernetes Service Account.

We can now exit the Vault shell session:

Step 4: Store the access token in Vault and configure permissions

With the next few steps, we’ll store the GitHub access token in Vault and configure permissions such that only the connect Kubernetes Service Account in the confluent Kubernetes namespace can read this credential. The ability to integrate authorization in one system (Vault) with identity in a completely different system (Kubernetes) in a way that is both seamless and loosely coupled is very powerful.

First, open an interactive shell session in the Vault container:

Now, from within that session, enable kv-v2 secrets at the path internal:

Store the GitHub access token, replacing <your-GitHub-access-token> with the token that you created in the previous step:

The way permission management works in Vault is that you create policies which describe a set of permissions, and then you bind policies to principals (such as users and Service Accounts) thereby granting the permissions in the policy to those principals.

The connect Service Account will be associated with our deployment of the Connect worker, enabling it to access the GitHub access token that we stored in Vault, without us having to provide that credential in plaintext when we POST the connector configuration to the Connect REST API.

We’ll create a working directory for the purposes of building the Connect worker image. We’ll only need this directory temporarily, so we can create a subdirectory under the /tmp directory, for example:

Write a Dockerfile that will be used to create an image, which includes the GitHub source connector:

Build and push the image, replacing <your-DockerHub-username> with your actual Docker Hub username so that the images are properly tagged and pushed to your account:

Next, download the Confluent Operator bundle. If your browser does not automatically extract the bundle into a directory like ~/Downloads/confluent-operator-1.7.0, you can extract it yourself as follows, replacing <path-to-downloaded-bundle> to the path where your unextracted bundle was downloaded:

For subsequent steps, we’ll assume that the contents are extracted to the ~/Downloads/confluent-operator-1.7.0 directory.

Take note of the most interesting parts of the configuration:

The above snippet binds the Connect worker Pods to the connect Service Account, which is authorized to read the credential from Vault.

The above annotations will trigger all the magic that will result in the Vault secret (GitHub access token) being written to an in-memory filesystem dynamically mounted to the Connect worker container. The format of the file will match what’s needed to leverage the Confluent Platform Externalizing Secrets capability.

Make sure to replace <your-DockerHub-username> in the example config.yaml file with your Docker Hub username so that Connect is deployed with the Docker image published in the previous step:

Install all the relevant Confluent Platform components with the following commands:

Step 8: Create and watch a topic

The Confluent Control Center UI is deployed but not accessible from outside the Kubernetes cluster. We can use port forwarding to open the Control Center in your browser on localhost.

Use the Control Center UI to create a topic called github-commits and keep the browser open; we’ll watch the messages stream in later.

Navigate to http://localhost:9021 in your browser. The basic authentication credentials are admin/Developer1.

If you see an error in your browser, it may be that the Control Center is not running and ready to accept connections yet. You can run the following command in a new shell (don’t cancel the above kubectl port-forward command):

Wait until you see output that says 1/1 Pods are READY:

Cancel the kubectl get pod command once you see the desired readiness state.

We’ll come back to the Confluent Control Center UI soon so we’ll leave the kubectl port-forward command from the previous section running. Like Control Center, the Connect API is not exposed over the Internet. Open a new shell session and run port forwarding so you’ll be able to curl the Connect API locally: