If you have been using Apache Kafka® for a while, it is likely that you have developed a degree of confidence in the command line tools that come with it. I am talking about tools that you know and love such as kafka-console-producer, kafka-console-consumer and many others. The popularity of these tools results mainly from the job well done by the community, which has shared thousands of articles, blogs, tutorials and presentations about Apache Kafka and how to use it effectively. These tools are important for developers who work with Apache Kafka, which is why we also provide the same tools with the Confluent Platform.

Over a year ago, we announced the first release of Confluent Cloud™: the simplest, fastest, most robust and cost-effective way to run Apache Kafka in the public cloud. As an Apache Kafka as a service solution, Confluent Cloud allows you to focus on building applications instead of building and managing infrastructure.

With Confluent Cloud clusters, this is no different. Its native CLI is also built upon the same principles. It creates a configuration properties file in the user home directory of the machine containing the connectivity details that you provided during its execution, such as:

Thereafter, any subsequent command that you issue (i.e., ccloud topic list) will read that file and use it to establish connectivity to the cluster. So the first thing you need to do to interact with your Confluent Cloud clusters via native Apache Kafka tools is to generate a configuration properties file—either by executing the ccloud init command or creating it manually.

Start by accessing the cluster details available in the Confluent Cloud UI. For that, you will need to click in the cluster name that you want the admin tools to connect, as shown in Figure 1.

Then, click in the option “Data In/Out” available in the left/upper side of the UI. That will show a sub-menu containing two options, Clients and CLI respectively. Click on the “Clients” option. Figure 2 below gives an example of what you should see after doing these steps.

It will be shown a configuration that you should use in your clients. This is exactly what we need to have the Apache Kafka admin tools accessing clusters in Confluent Cloud. Before copying the configuration, make sure to generate a key/secret pair by clicking in the “Create Kafka Cluster API key and secret” button. The UI will ask you to confirm that the information that is about to be provided is confidential and, therefore, you should keep it safe. Please do that.

Keep this configuration properties file in a secure location. Remember that through it anyone can access your cluster and create any sort of mess they want, whether it is creating and/or deleting topics, producing more records than what your cluster has been sized to handle, as well as oversubscribing partitions by introducing new consumer group members.

Here comes the fun part. We are going to use the configuration properties file created in the previous section with some of the tools that Kafka developers typically use. In the following examples; you should assume that the file config.properties has the same content shown on Listing 1, and has been properly modified to include the information from the Confluent Cloud cluster.

Let’s start by using the kafka-console-producer to produce records to a topic. Listing 2 shows an example of this:

Listing 2. Using the kafka-console-producer to produce records to a topic

Notice that besides the config.properties file we also had to provide the bootstrap broker list endpoint as well. Some admin tools from Apache Kafka were created to connect to the cluster based on information provided as a parameter. So though it may sound like the bootstrap broker list endpoint is provided twice, this is necessary to properly establish connectivity with the cluster.

Similarly, you may want to simulate the consumption behavior with the kafka-console-consumer tool. Listing 3 presents an example of consuming records from a topic and printing both key and value for each record consumed:

Listing 3. Using the kafka-console-consumer to consume records from a topic

Another interesting admin tool is the kafka-consumer-groups. It is often used to troubleshoot potential problems related to records consumption within a consumer group, such as verifying the offset details of a given consumer group or determining its lag issues. Since this tool operates at a consumer group level, you need to know the name of the consumer group that you want to check. If you want to know which consumer groups are available, you can list them using the example from Listing 4:

Once you get the name of the consumer group you want to inspect, you can use the example shown in Listing 5 to gather its offset details:

Listing 5. Showing the offset details of a given consumer group

Will this work in any situation?

It is important to note that connectivity from your end to Confluent Cloud clusters is necessary. It’s easy to find yourself trying to understand why your tools are not working when in reality you are facing connectivity issues. Trying to ping the cluster address won’t work because most cloud providers disable ICMP traffic coming from the internet.

Thus, you might want to test the connectivity using a port-based approach. A good way to verify if your cluster is reachable from the machine that is running the tools is by using the netcat tool. Listing 6 below shows an example of how to check if the cluster port is reachable:

Listing 6. Checking if the cluster’s port is able to receive connections

The most common topology is when you’re connecting to the cluster via the public internet. In this scenario, the machine used for running the tools needs to have access to the public internet via some internet gateway, which in turn means that it needs a public IP address. If that is true and you still can’t reach the cluster port, then you should check any firewall rules that might be applied to the machine. Certain subnets have restrictions on accessing endpoints from the public internet, so you will need to create exceptions for the ports used by the cluster, notably the port 9092.

If this machine is running in a private subnet and doesn’t have a public IP address, it might need to be associated with a NAT (Network Address Translation) gateway that will ensure outbound connectivity. 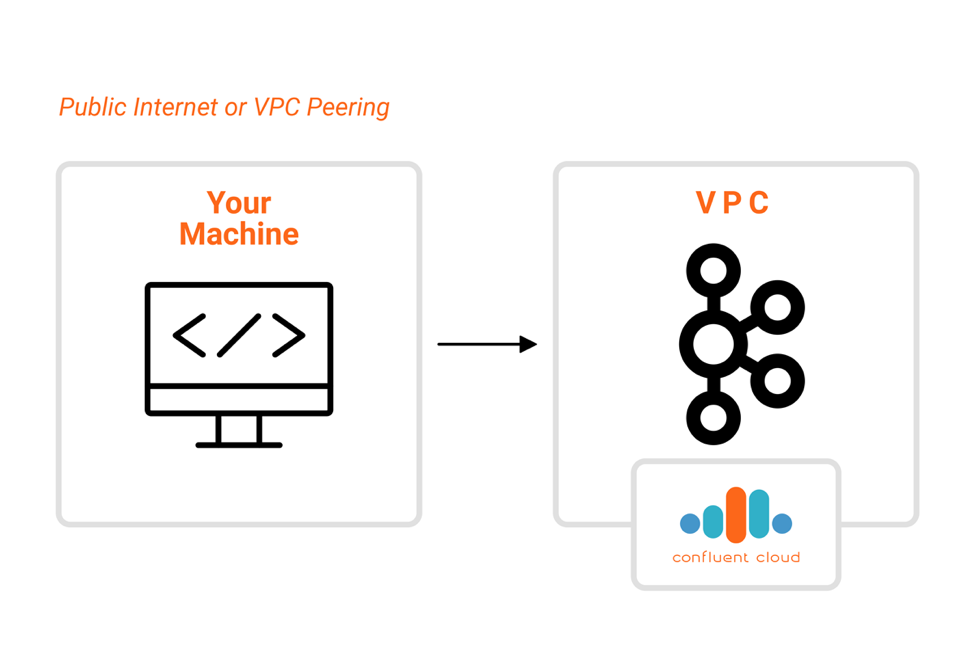 Another situation that you should take into consideration is accessing the cluster from a private channel via an internal endpoint. This occurs when you are accessing the cluster via VPC peering, in which the VPC that hosts the cluster has been peered with another VPC where you intend to run your applications and the tools. In this situation, you need to find out not only if both VPCs has been properly peered but also if there are any firewall rules that can interfere with the connection, which in this case can be be either inbound (connections getting into the cluster VPC) or outbound (connections getting out of your machine).

While it’s great to know that the tools from Apache Kafka works seamlessly with clusters from Confluent Cloud, you should know that you are not restricted to that. Users of Confluent Cloud have free-of-charge and unlimited access to the components of Confluent Platform, such as Confluent Control Center, ksqlDB, Confluent Replicator, connectors and others. You can leverage these along with the Kafka tools you already know, and run them anywhere you want, whether if it’s in your laptop, in any on-prem datacenter or in a given cloud provider.