First, features like Role-Based Access Control, Structured Audit Logs, Multi-Region Clusters, and broker-level Schema Validation are all prerequisites for a production-ready deployment of an event streaming platform. And when running efficiently at scale, you’ll need Confluent Control Center to help you manage and monitor all these feature and more. You’ll also need preview access to innovations like Tiered Storage. Finally, when you’re actually building applications on Confluent Platform, you’ll need developer productivity tools like KSQL pull queries and the KSQL REST API, and the many new features in Apache Kafka® 2.4.

Building an event-driven architecture with Apache Kafka allows developers to transition from traditional silos and monolithic applications to more modern microservices and event streaming applications that fundamentally increase their agility and accelerate their time to market.

However, in addition to Kafka, larger enterprises need certain foundational architectural attributes around security, resilience, and compliance that are considered production-stage prerequisites. They also need additional tools and features that would allow them to run Kafka efficiently at very large scale.

As always, the release notes have the full story, but this blog post has a summary of the highest of the high points. Read on for more.

The larger the enterprise, and the longer it has been around, the more complex its IT environment. That complexity can breed risk and fragility, as layers of legacy systems add a growing attack surface able to be exploited by malicious actors, impacted by poor quality controls, or altogether taken down by both internal errors or external forces. Any of these occurrences can halt operations, damage revenue streams, and tarnish an organization’s reputation indefinitely and irreparably in front of end customers and business partners.

Nobody wants that. Which is why Confluent Platform 5.4 has strengthened its enterprise-grade security support in the form of Role-Based Access Control (RBAC) and Structured Audit Logs.

Back in July, we announced the preview for RBAC as part of the Confluent Platform 5.3 release. After gathering feedback and learning from everyone who tried it out, we are now pleased to announce the availability of RBAC in Confluent Platform 5.4. You can now make use of this feature in production environments with Confluent’s full support.

RBAC offers a centralized security implementation for enabling access to resources across the entire Confluent Platform with just the right level of granularity. You can control permissions you grant to users and groups to specific platform resources, starting at the cluster level and moving all the way down to individual topics, consumers groups, or even individual connectors. You do this by assigning users or groups to roles. This gets you out of the game of managing the individual permissions of a huge number of principals—a real problem for large enterprise deployments.

RBAC delivers comprehensive authorization enforced via all user interfaces (Confluent Control Center UI, CLI, and APIs), and across all Confluent Platform components (Control Center, Schema Registry, REST Proxy, MQTT Proxy, Kafka Connect, and KSQL). Given the distributed architecture not only of Apache Kafka but also of other platform components like Connect and KSQL, having a single framework to centrally manage and enforce security authorizations across all the components is, in a word, essential for managing security at scale.

Another new security-related feature in 5.4 are Structured Audit Logs. Now, of course everything in Kafka is a log, but Kafka doesn’t log what Kafka does to Kafka—only what you produce to topics. But what about creating topics, changing permissions, and modifying access control lists (ACLs)? Those are all very important operations that can impact the security and overall functioning of the cluster. It would be good to keep a record of them, which is exactly what Structured Audit Logs do in Confluent Platform.

Structured Audit Logs enable authorization logs to be captured in a set of dedicated Kafka topics, either on a local or a remote cluster, including:

With all those events safely in topics, you can then use Kafka-native tools, like the Kafka Streams API or KSQL, to process and analyze them. You can also offload them to external systems for analysis, like Splunk or Amazon S3, using Confluent-supplied sink connectors.

To provide industry-backed standardization, Structured Audit Logs use the CloudEvents specification to define the format of the logs. CloudEvents is a vendor-neutral specification that defines the format of event data and is rapidly becoming the industry standard for describing event data. We are happy to be the first vendor in the event streaming space to support CloudEvents, and we expect it to gain significant traction going forward.

Historically, running one cluster across datacenters—a so-called “stretch cluster”—involved significant tradeoffs, to the point where some operators actually recommended not using this topology at all. Now, Confluent Platform 5.4 gives you the ability to replicate topics across datacenters asynchronously, so the data gets across the high-latency link to the other datacenter without making your producer wait on that replication to happen for its produce operation to be considered successful. Combined with automated client failover, this gives you the ability to run a stretch cluster without the worst of the tradeoffs you’ve seen in the past.

Running a single stretch cluster across multiple regions has long been a desired architecture historically fraught with certain operational complexities. It was really only viable in a few scenarios because of compromises in performance, cost, and operational complexity. Multi-Region Clusters in Confluent Platform 5.4 expand those scenarios significantly, such that stretch clusters are no longer a risky choice.

Confluent Platform has long included the Confluent Schema Registry, a component that helps teams collaborate around schema change and ensures at the client level that transitions from one schema version to the next will not break a consuming application. However, Schema Registry requires that everyone be a good citizen. If a producer writes to your cluster without validating messages against the registry, it can write any number of invalid messages to a topic, breaking the limits of the consumer code’s exception handling capability. And of course all of your consumer code is completely hardened against invalid inputs and will handle all of these invalid messages gracefully, but what about the many other teams writing applications against your Confluent cluster? Clearly, we must do better.

We now have the option to enable Schema Validation at the topic level. Configured in this way, Schema Validation will ensure that every single message produced to a particular topic is validated for key and value schema compliance with the corresponding policy in the Schema Registry—regardless of whether the producing and consuming clients bother to check. Any messages that are found to be invalid are dropped from the batch, and the broker sends an error indication back to the consumer. 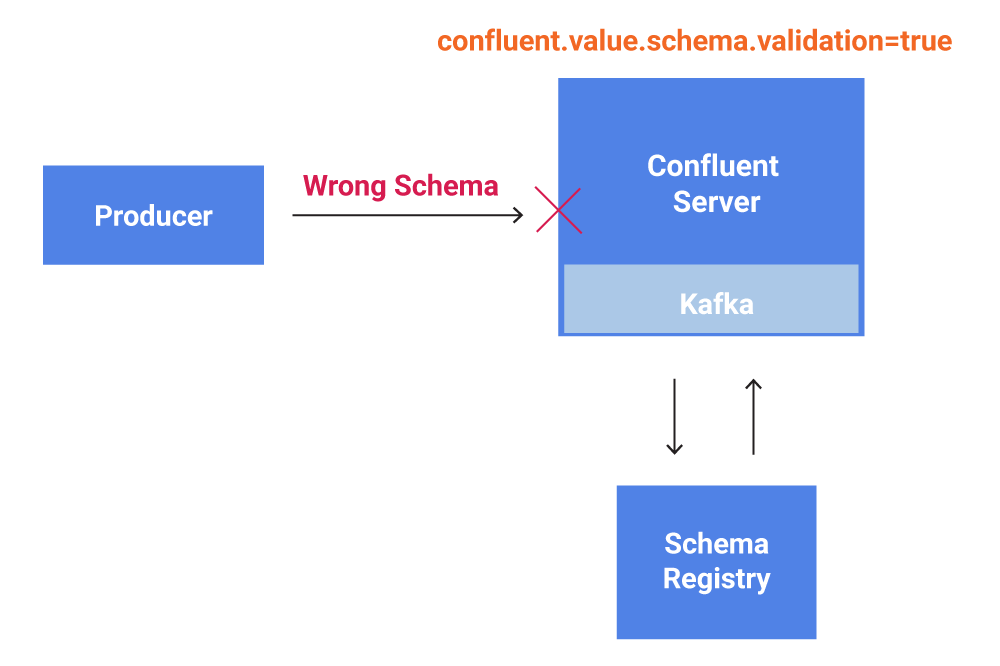 With Schema Validation, you now have much greater control over the quality of the data being written to the system. Policies that require client-level schema validation are still highly advisable, but broker-level validation is the last and best defense against malicious or negligent applications.

Once an enterprise has laid the technology foundation for stable, long-lasting operations, the next step is to seek more efficient operations that will allow the event streaming infrastructure to scale with as little pain as possible.

The introduction of new capabilities like RBAC, Multi-Region Clusters, and Schema Validation requires new interfaces to manage them. We are ensuring that Control Center remains your go-to GUI for managing and monitoring your Confluent Platform cluster by adding purpose-built support for every new feature we ship.

Confluent Replicator integrates with Control Center for visibility and monitoring

Another widely successful feature of Confluent Platform is Confluent Replicator, which allows per-topic replication across datacenters. Confluent Platform 5.4 integrates Replicator with Control Center, so you can now monitor their replication tasks directly from the GUI, just like you would monitor connectors, allowing you to track key metrics such as throughput and lag.

As a continuation of the redesign work that Control Center underwent starting with Confluent Platform 5.3, we have added a couple of overview pages that streamlines the way Kafka operators view and understand their Kafka environment.

Some of the most successful (and to me, exciting) Confluent deployments are adopting the database inside out architectural paradigm. This is an incredibly successful model, but it encourages you to set very large retention periods on your topics. This is fantastic architecturally, but might be a little pricey as your system grows and time goes on. Tiered Storage is the obvious solution to this problem. Here’s what it can do for you:

As with any preview feature, Tiered Storage is not yet supported for production environments, which means we might make changes to APIs and underlying data formats before we reach general availability. Still: check it out now.

Following the standard for every release, Confluent Platform 5.4 is built on the most recent version of Kafka, which in this case is version 2.4. Kafka 2.4 is a feature-rich release of which there is too much to explain here, so let me sum up:

For more details about Kafka 2.4, please read the blog by Manikumar Reddy. If you prefer video to the written word, I made a video for you that’s embedded in that blog post. Sheep are present. Don’t miss it.

On November 20th, Confluent announced the release of ksqlDB, an event streaming database that seeks to unify the multiple systems involved in stream processing into a single, easy-to-use solution for building event streaming applications. ksqlDB aims to bring the approachable feel of relational databases to the world of stream processing, making it easier for developers to build the event streaming applications that are increasingly required to compete and succeed in the modern era. ksqlDB is an in-place evolution of KSQL, adding two new features (for now):

For Confluent Platform 5.4, these two new features are being released in preview as part of KSQL.