When self-managing Confluent, provisioning and configuring Apache Kafka® deployments along with the rest of the Confluent components involves many hurdles, such as managing infrastructure, installing software, and configuring security. And deployment is just the beginning of the operations journey. This blog post introduces you to the GitOps pattern and shows you how tools like cp-ansible and Ansible Tower can simplify the deployment process.

Infrastructure as code with CP-Ansible

As your infrastructure footprint scales, it becomes increasingly important to make your deployment process simple and repeatable. If you are standing up a web server on a single virtual machine (VM), you might be able to make the case for manually configuring that host, but when it comes to 100-node Kafka clusters, it’s best to follow the GitOps pattern. GitOps starts with representing your deployment as code.

In the above inventory file, there are three groups defined: all, zookeeper, and kafka_broker. Under a group, there can be hosts and variables. The all group is a simple way to apply variables to all hosts defined in the file. A full inventory file will have more groups and variables defining which Confluent components should be installed on which hosts and how cp-ansible should configure them.

Ansible Tower is an automation server that manages Ansible playbook runs. It saves your logs, and has a GUI. To set up cp-ansible within Ansible Tower, there are many steps you need to follow. The below script uses the AWX command line interface to automate all setup tasks:

The full script is provided in an accompanying demo, but note that the “Create inventory project” step uses a Git repo for its source. It is possible to store your inventory files within Tower itself, but Git is the preferred way to keep in line with GitOps.

After the script completes, you can go into the Tower UI and trigger the “Deploy on AWS” job. Here is a screenshot of the output: 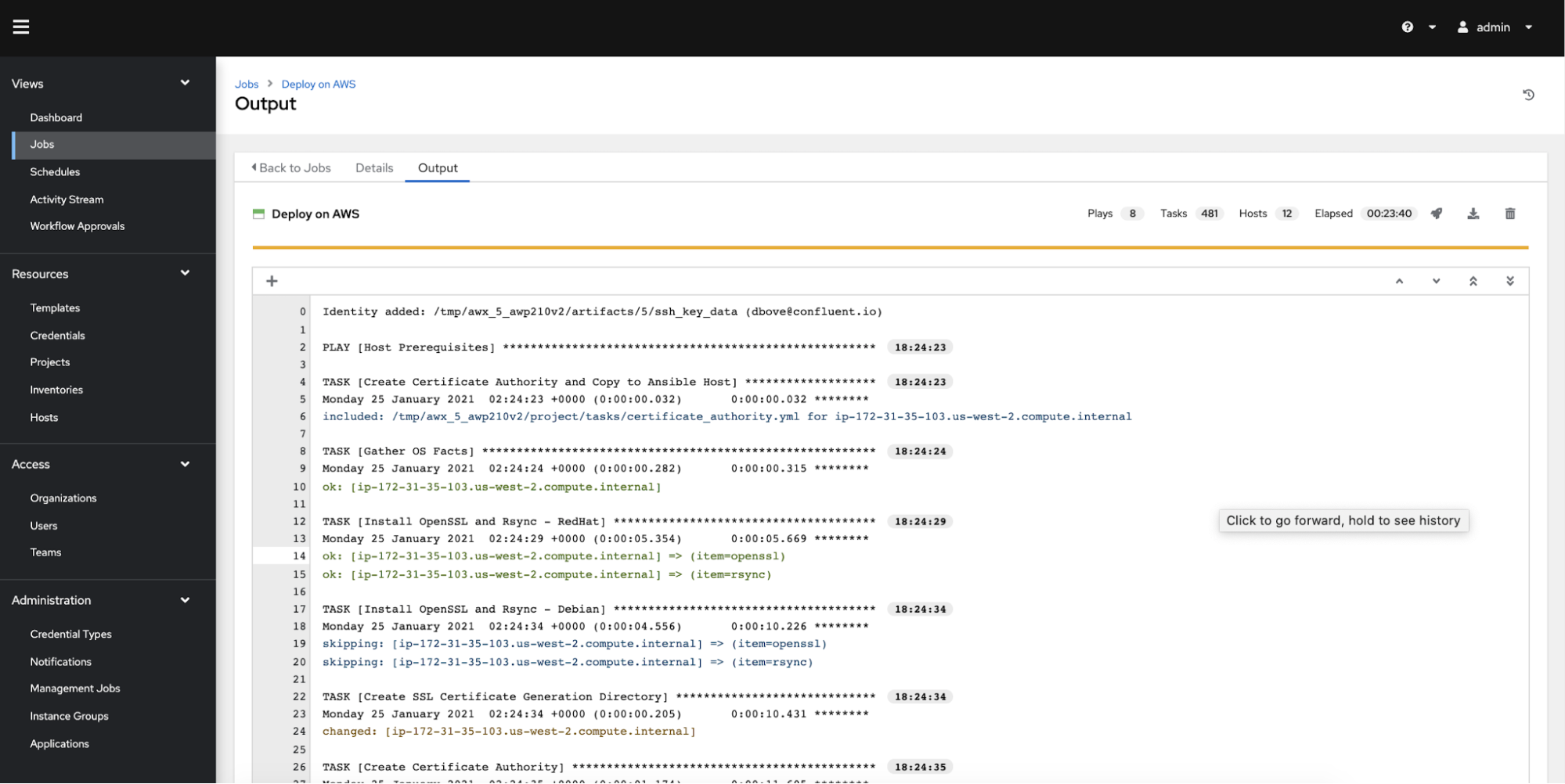 After the job completes, Confluent Platform is deployed and Confluent Control Center can be accessed. 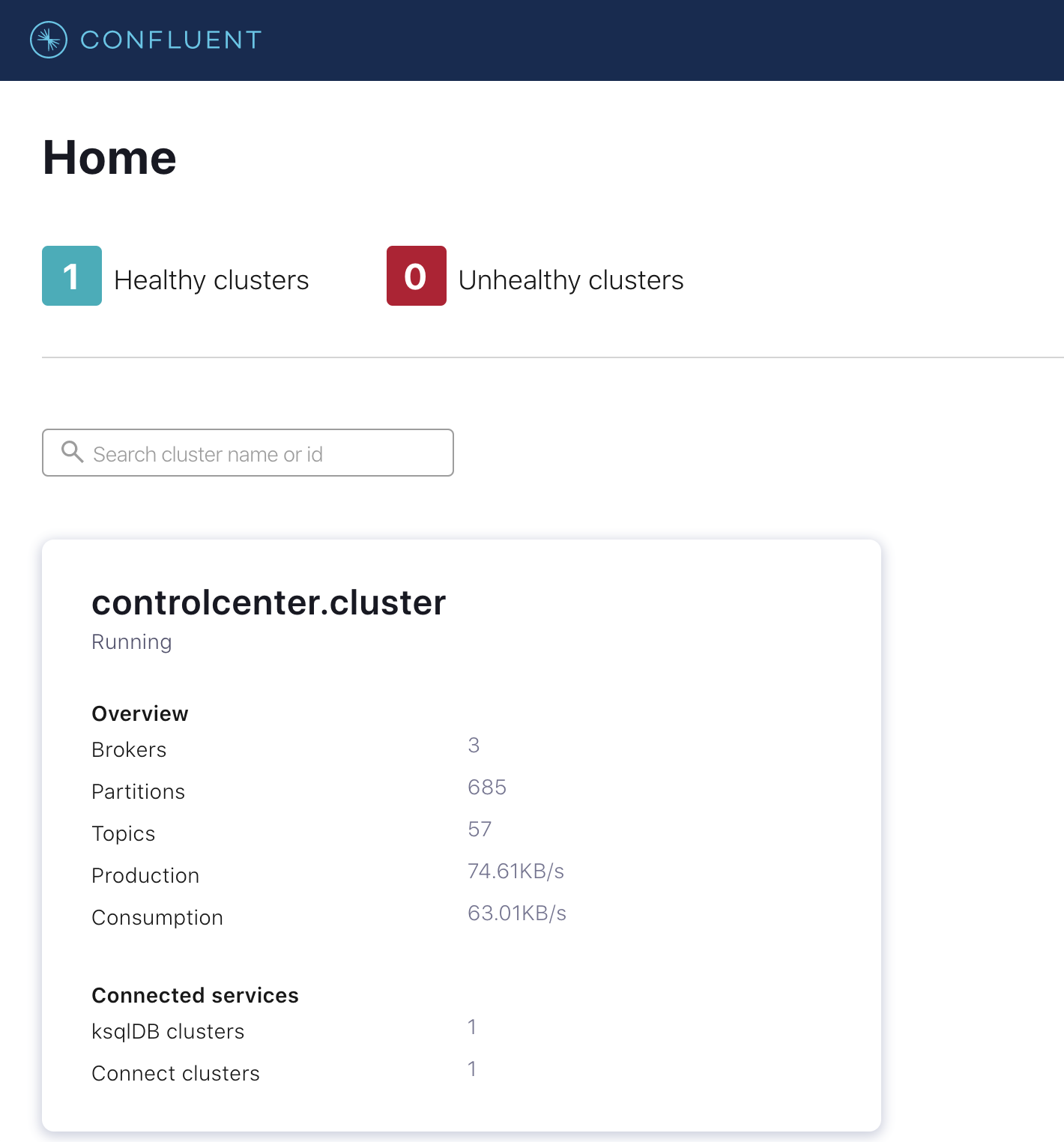 For continuous deployment of Confluent with Ansible Tower, run through the Ansible Tower demo. The demo uses Docker Compose to deploy Confluent Platform on AWS infrastructure.

Next steps for self-managing Confluent

Ansible Tower has the Git webhooks capabilities, which means that updates to your inventory file within Git can trigger the cp-ansible deployment job. Starting with cp-ansible 6.1.0, there is support for reconfiguration. Turning this on achieves continuous deployment with zero downtime! You can push changes to your inventory file and they will automatically update on your hosts.

Don’t want to manage Confluent and Kafka yourself?

This blog post provides a solution for Kafka deployments. But there is still more work on the operations journey to complete, such as tuning, monitoring, scaling, and upgrading. cp-ansible assists with some operations, but it is your ops team’s responsibility to manage. To alleviate the operational burden, look to Confluent Cloud, a fully managed service for Apache Kafka that means you don’t have to worry about ops and can get to streaming. Sign up for Confluent Cloud and receive $400 to spend within Confluent Cloud during your first 60 days. In addition, you can use the promo code CL60BLOG for an extra $60 of free Confluent Cloud usage.*

Domenic Bove is a CP-Ansible contributor and maintainer. In his free time, he likes to kite surf.

Today we’re announcing an exciting Strategic Collaboration Agreement (SCA) with Amazon Web Services (AWS). This new five-year agreement builds on our strong existing collaboration, with the goal of making it