We’re pleased to announce ksqlDB 0.11.0, which takes a big step forward toward improved production stability. This is becoming increasingly important as companies like Bolt and PushOwl use ksqlDB for mission-critical use cases. This release includes numerous critical bug fixes and a few feature enhancements. We’ll step through the most notable changes, but see the changelog for the complete list.

ksqlDB supports horizontal scaling by having multiple ksqlDB nodes coordinate to process data. As such, materialized state for persistent queries may be spread among multiple nodes. When a pull query request is issued, if the receiving ksqlDB server does not host the requested data, the request is forwarded to a node that does. Starting with ksqlDB 0.11.0, the HTTP clients used for such forwarding requests are cached and reused, greatly improving pull query performance in multi-node clusters. More details may be found on GitHub.

As of ksqlDB 0.9.0, windowed aggregations have configurable retention—simply add a RETENTION clause to the SQL query that creates the windowed table. The specified retention controls how long aggregate state for a particular window is available in the materialized state store. Prior to ksqlDB 0.11.0, retention clauses had no impact on the retention of the underlying Kafka topic for the windowed table, which led to confusing behavior. ksqlDB 0.11.0 also fixes a long-standing bug where old windows were not properly expired from the underlying Kafka topic.

ksqlDB 0.10.0 saw the introduction of ksqlDB’s first-class Java client, including support for pull and push queries, as well as inserting new rows into existing ksqlDB streams. We’re happy to unveil expanded functionality in ksqlDB 0.11.0, including methods to create and manage new streams, tables, and persistent queries, as well as admin operations such as listing existing streams, tables, topics, and queries. 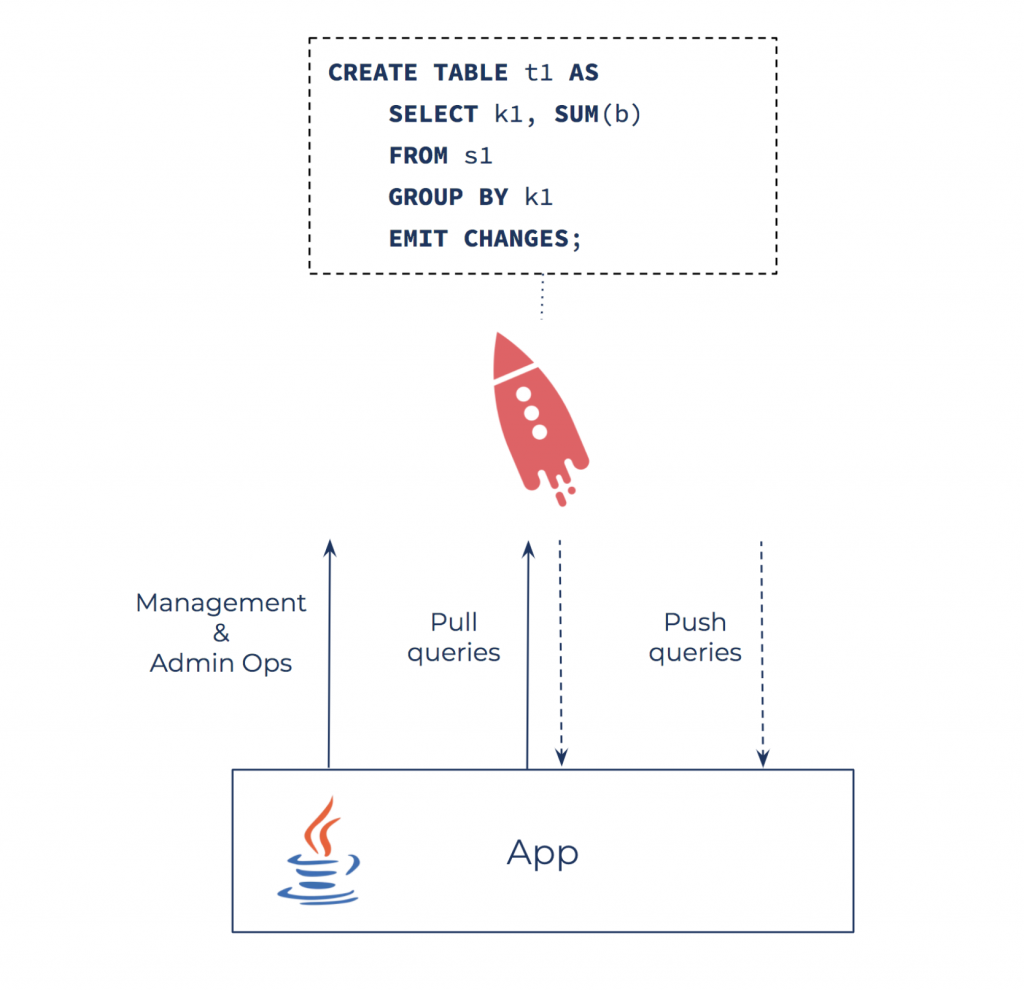 ksqlDB statements for creating and managing new streams, tables, and persistent queries include:

As of ksqlDB 0.11.0, these statements are now supported by the Java client via its executeStatement() method. For example:

The executeStatement() method may also be used to easily retrieve the query ID for a newly created query. This query ID may later be used to terminate the query.

See the documentation for additional options and usage notes.

As of ksqlDB 0.11.0, the Java client also supports listStreams(), listTables(), listTopics(), and listQueries() methods for retrieving information about available ksqlDB streams and tables, Kafka topics, and running queries. For details and examples, see the documentation.

ksqlDB’s pull queries allow users to fetch the current state of a materialized view. When the materialized state contains the results of a windowed query, it’s useful to filter state on not only the rowkey but also the window bounds.

Prior to ksqlDB 0.11.0, this filtering was enabled by the WINDOWSTART keyword. Starting with ksqlDB 0.11.0, the WINDOWEND keyword may be used in pull query filters as well. This new functionality is especially useful in the case of session windows, where the size of the time windows is not known in advance.

Get started with ksqlDB today, via the standalone distribution or with Confluent Cloud, and join the community in our #ksqldb Confluent Community Slack channel.

Victoria Xia joined the ksqlDB Team at Confluent in 2018 after completing her bachelor’s and master’s in electrical engineering and computer science at the Massachusetts Institute of Technology (MIT). Since then, she’s worked on a variety of projects spanning monitoring and alerting, performance benchmarking, security, and Confluent Cloud ksqlDB.