With the evolution of the gaming industry, the demand for real-time data integration and processing at scale increased significantly. Many gaming enterprises leverage an event streaming platform powered by Apache Kafka® and its broad ecosystem like Kafka Connect, Schema Registry, and ksqlDB to process data in motion for various use cases such as providing a better customer experience, increasing the gaming revenue, and reducing the risk of fraudulent gaming behavior or payments. A few examples include:

You can learn more details in this on-demand webinar: Kafka and Big Data Streaming Use Cases in the Gaming Industry.

This blog post shows a real-time gamification demo to integrate gamers via WebSockets to the data streaming backend infrastructure.

Real-time streaming for millions of players with a serverless infrastructure

Today, there are two common IT trends related to the gaming idustry: implementing a serverless infrastructure to focus on business problems, and addressing the challenges associated with the integration of the players.

Fully managed event streaming is the answer. Gaming companies want and need to focus on business value, not operating the event streaming infrastructure. Confluent Cloud is the logical choice for many gaming deployments because it includes messaging and data ingestion, as well as data integration with fully managed connectors, data processing with ksqlDB, and security and data governance on top of the whole event-based architecture.

The last-mile integration with millions of mobile devices, computers, and game consoles is challenging. Kafka was never built for this. WebSockets is a complementary technology to implement the integration of players in real time at scale.

The following details a concrete example of how to implement the last-mile integration at scale in real time, and is similar to the Disney+ Hotstar example above. The demo shows how Kafka and WebSockets are the perfect combined solution for end-to-end data integration and correlation in real time.

Traditionally, the HTTP protocol has been used to achieve web messaging. Techniques like HTTP (long) polling have been used to get fresh messages from the server side, the polling frequency determining the latency of the messages. So, to reduce the latency of messages and achieve a decent real-time experience for users, the polling frequency needed to be increased. But polling often means reconnecting frequently to the server which results in immense pressure on the web server when dealing with lots of clients. In addition, if the client runs from the web browser, at each HTTP request sent to the server, the web browser appends by default hundreds of bytes as HTTP headers, putting additional pressure on the web server and increasing the bandwidth costs.

Unlike HTTP, the WebSocket protocol keeps a single, persistent connection with the server so that any new message is sent to the client (or vice versa) as soon as it is available, reducing the pressure on the server and resolving the latency and bandwidth problems. That said, while the WebSocket protocol creates the conditions for web messaging scalability, the scalability of a WebSockets server depends on the quality of its implementation.

Since it is not optimized to handle lots of connections, Kafka should offload the web messaging task to another messaging layer which would preserve its key advantages such as guaranteed delivery, message ordering, scalability to handle large volumes of messages, and high availability.

MigratoryData is one of these enterprise messaging solutions. However, it does not employ the MQTT protocol. The MQTT protocol is a standard for the IoT industry. It is designed to be simple enough to accommodate the constrained IoT devices. For example, it implements guaranteed delivery using simple acknowledgements which can lead to scalability issues such as feedback implosions for non-IoT use cases, such as real-time web and mobile apps with lots of users. Instead, MigratoryData chose to employ its application layer protocol, which is optimized to handle up to 10 million concurrent WebSocket clients on a single commodity machine. It is a proven protocol used for over a decade in large-scale mission-critical deployments with millions of users. Also, it is designed to achieve guaranteed delivery, message ordering, scalability, and high availability. To learn more, check out the paper Reliable Messaging to Millions of Users with MigratoryData.

MigratoryData provides two integrations with Kafka. One is based on Kafka connectors, specifically, source and sink connectors using the Kafka Connect service. The other one is based on a Kafka add-on which integrates natively with Kafka, without using an intermediary service.

This post shows how to create an interactive gamification feature that scales and demonstrates how feasible and cost-effective it is to build such interactive features using MigratoryData with the Kafka-native add-on enabled, Kafka, and WebSockets to engage in real time with millions of users.

During the last edition of the World Cricket Cup, the OTT platform Disney+ Hotstar counted 25.3 million simultaneous viewers, a world record in terms of audience. The OTT platform uses gamification to engage with the large number of cricket fans in India, leveraging the Watch ’N Play interactive game, where viewers of a live cricket match can answer  questions in real time about what happens on the next ball to win points and redeem prizes. Check out this presentation to learn how Hotstar leverages the Confluent ecosystem to realize the event streaming backend infrastructure at scale.

Inspired by the Hotstar gamification use case that requires bidirectional real-time messaging and event streaming between the backend infrastructure and millions of users, we built an interactive gamification demo. The demo consists of asking a live question every 20 seconds with a 10-second response deadline. Therefore, a player of the demo has 10 seconds to answer a live question to win points. The demo also displays a leaderboard with the 10 highest scoring players. 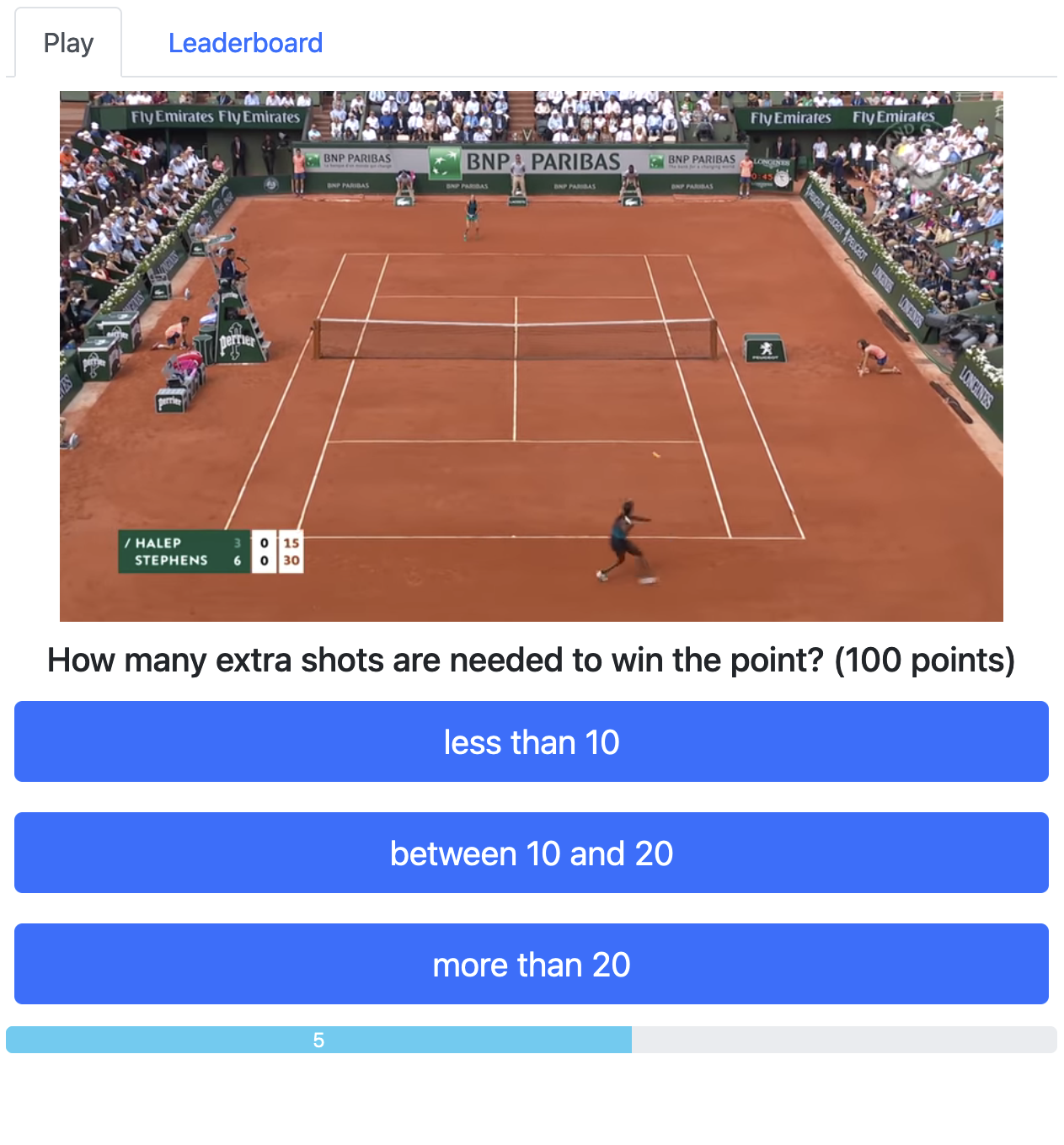 The demo consists of the following components alongside MigratoryData and Kafka:

The UI of the demo consists of two views: a Play view and a Leaderboard view.

The following MigratoryData subjects, Kafka topics, and keys are used to model the real-time interactions of the Play view:

The following MigratoryData subjects, Kafka topics, and keys are used to model the real-time interactions of the Leaderboard view:

A Player x that opens the Leaderboard view connects to MigratoryData WebSockets Server using a persistent WebSocket connection and subscribes to the subject /top/x. As explained above, MigratoryData WebSockets Server is configured to subscribe to the Kafka topics question, result, and top, and Leaderboard Processor subscribes to the Kafka topics result and gettop. The workflow of messages is as follows:

We rearchitected the initial implementation of the Play view of the demo application using ksqlDB to simplify the solution leveraging Kafka-native stream processing. With a few ksqlDB queries we can eliminate the backend components Answers Processor, Questions Generator, and Leaderboard Processor of the demo application. For example, a simple insert into a ksqlDB stream replaces the functionality of the Questions Generator component:

The backend implementation based on ksqlDB is available on GitHub. The event streaming infrastructure can be deployed by Docker Compose using the Docker images provided by MigratoryData for the WebSockets Server and by Confluent for Kafka and ksqlDB.

The deployment of the backend can be further simplified by using Confluent Cloud. This way, the focus can be on the business side since the entire event streaming infrastructure is provided as a truly serverless offering, including Kafka, connectors, ksqlDB, data governance, security, and more. If you want to learn more about the difference between a truly serverless and complete Kafka offering (i.e.,  self-driving car) compared to a self-managed Kafka deployment (i.e., car engine), check out this blog post.

Vertical scalability of the WebSocket-Kafka integration

Kafka and WebSockets enables real-time gaming at any scale

The gaming industry needs to process high volumes of data in real time to provide a great customer experience and make good revenue margins. This blog post shows how Kafka and WebSockets are a great combination to build end-to-end data integration, processing, and analytics in real time at scale for millions of users.

Confluent Cloud provides a serverless ecosystem for event streaming including fully managed connectors, data processing, data governance, and security. In combination with MigratoryData, the last-mile integration to millions of users is possible in real time.