It’s official: Kafka Summit is back! Technically, it never went away—it just went online. But this week in London, Kafka Summit returned in all its glory to welcome over 1,200 people—real human beings—back to this in-person conference. And I can tell you: it was glorious! Conversations were had, talks were enjoyed, and questions were answered, all as the community convened for two days of talks about Apache Kafka®. 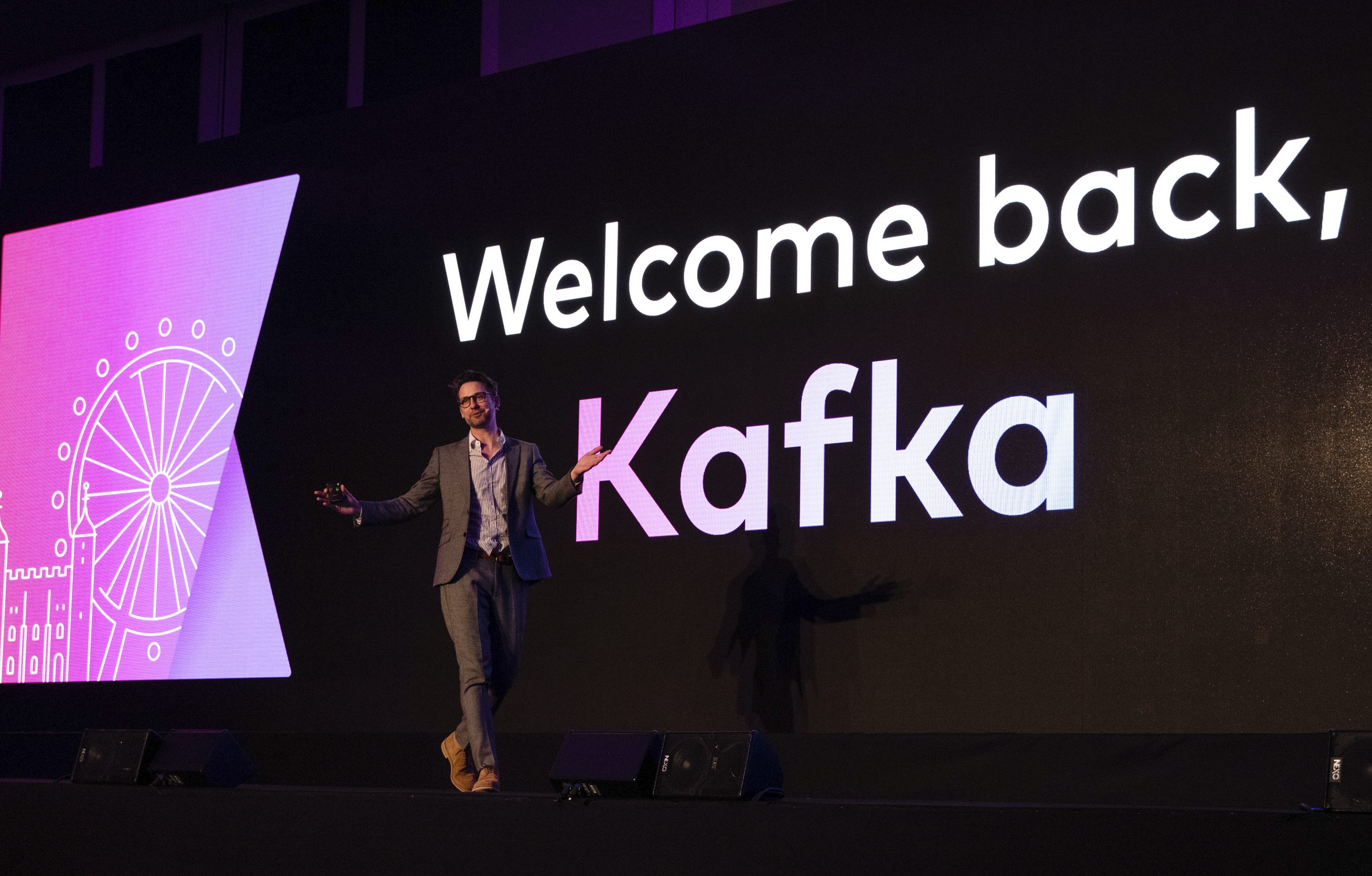 Kafka co-creator and Confluent CEO Jay Kreps took to the stage to discuss where Kafka and event streaming is at, and where it’s heading next. He laid out the five principles under the umbrella of modern data flow: 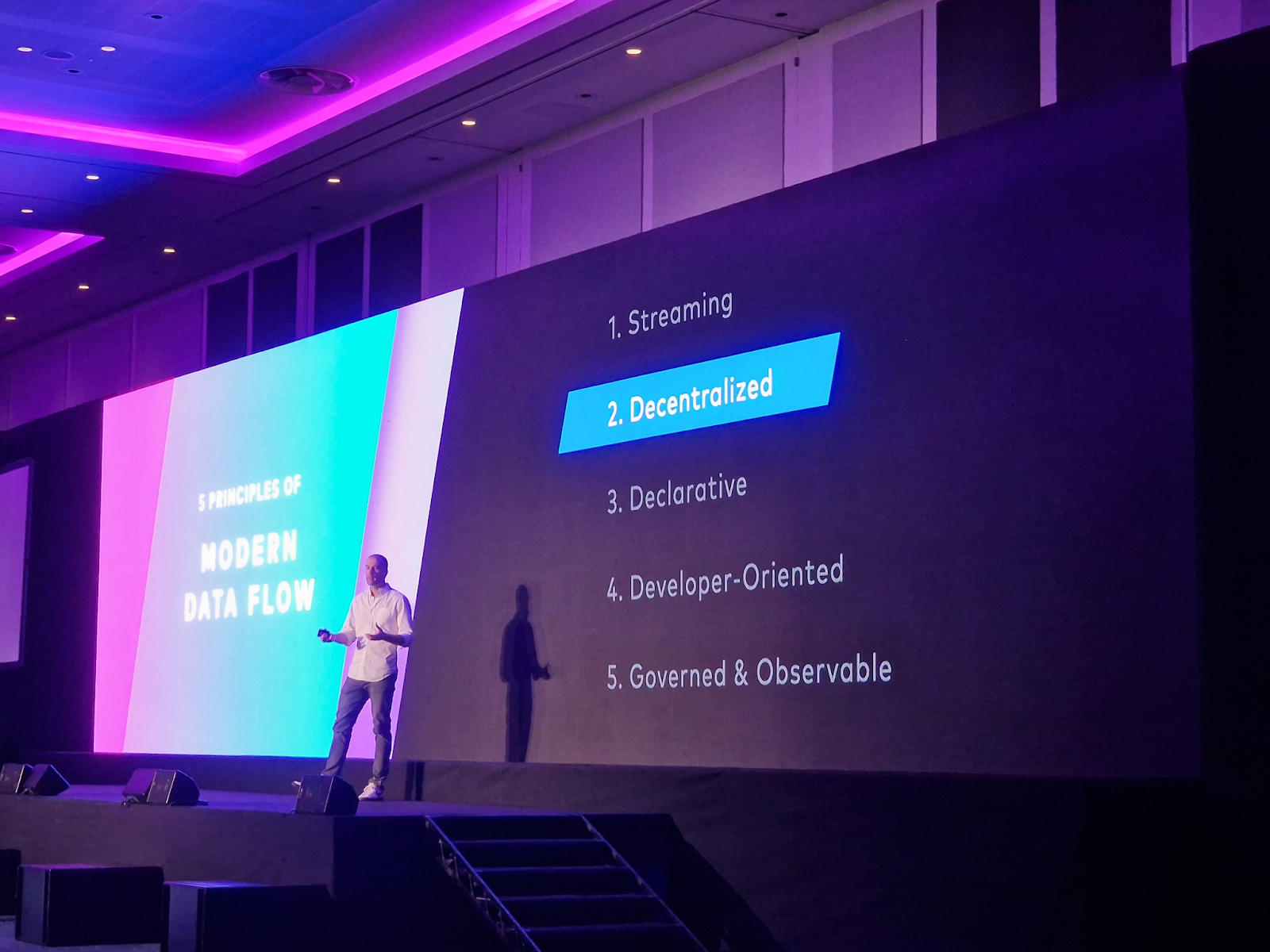 Some of the principles will have been familiar to many already—such as the fact that streaming is central to so many successful systems because life doesn’t happen in batch. Others brought in concepts from other areas of software development, including the important ideas of decentralization (such as seen with the concept of data mesh), and the importance of pipelines being developer orientated and declarative. 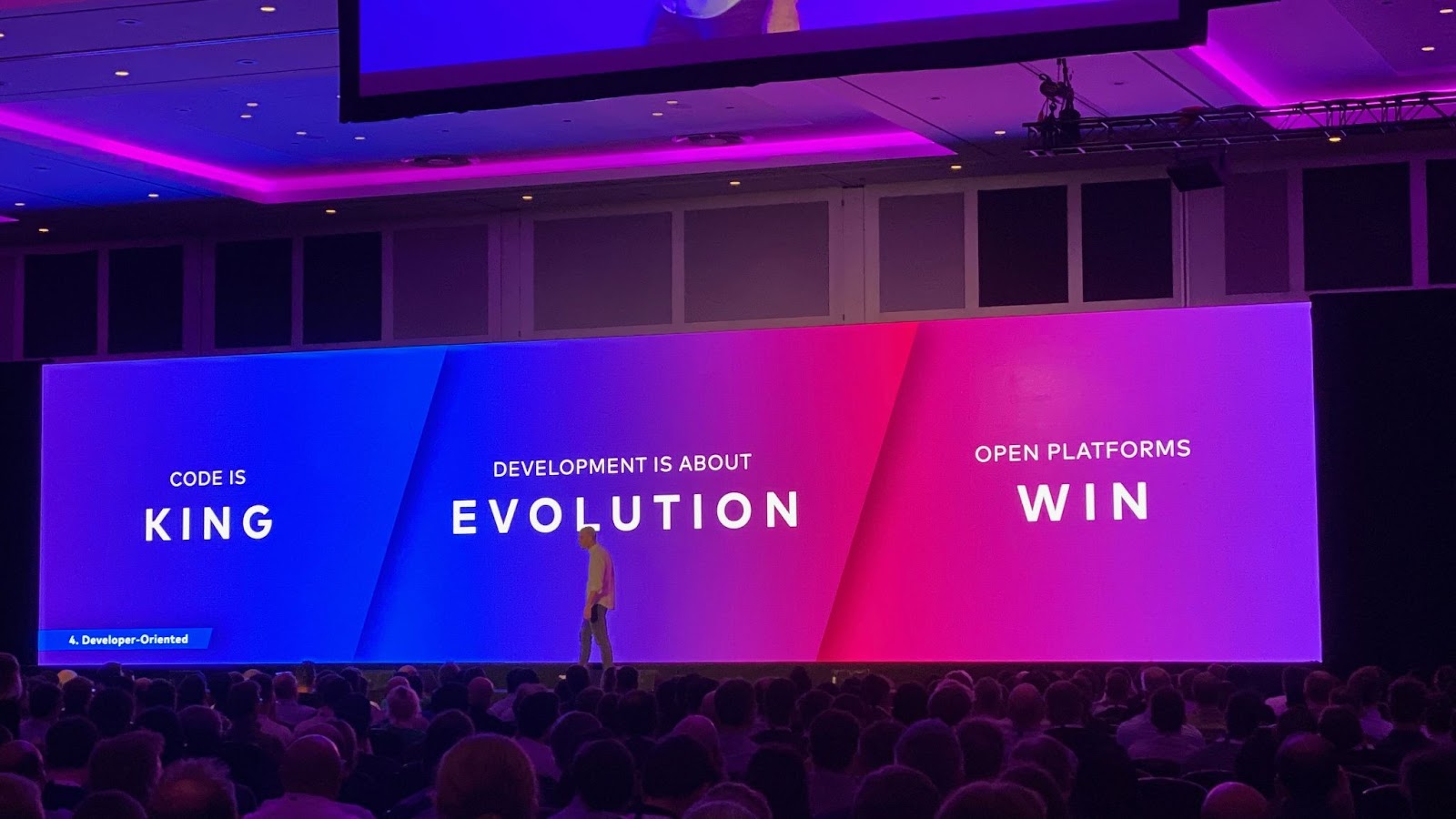 After this, we saw a cool demo of these modern data flow concepts in action, built around the idea of an airline and its decentralized data model and showing some of the tooling that’s now available. You can try it out for yourself using the airline demo recipe.

Next up on stage was Avi Perez, head of backend engineering at Wix.com. He talked about how he and his team are using event streaming to power a full 7% of the internet’s websites through Wix’s no-code web development platform. Their initial Kafka use turned into Confluent Cloud adoption, allowing Wix teams to maintain 20 clusters across two public clouds and three continents connecting 2400 microservices with 70 billion business events every day.

Jay Kreps rounded off the keynote by announcing Current 2022: The Next Generation of Kafka Summit. The inaugural Current will be held in Austin October 4-5, 2022, and you can read more about it in Ben Stopford’s blog. The Call for Papers is already open.

You can watch the full keynote below.

As I sat in the sessions, I realized that there is something unique about hearing a talk in person. It’s not just the fact it’s in real life and not a tab on your browser to zone out of. It’s the people near you, the feeling of interest and learning all around you. The muttered exclamations at a cool demo, the whispered nods to colleagues at a great idea to take back and implement in their own system.

Attendees at Kafka Summit were kept busy with 60 sessions over four parallel tracks, ranging from Disaster Recovery Options Running Apache Kafka in Kubernetes to Let’s Make Your CFO Happy: A Practical Guide for Kafka Cost Reduction. Many of the sessions were recorded and will be available online in the coming weeks.

You can check out the #kafkasummit tag on Twitter for lots of notes and commentary on sessions that people watched. Here are just a handful of highlights of the sessions that I attended.

Kris Jenkins closed the summit with a panel of the Apache Kafka committers who were at the conference, discussing future ideas and direction for Kafka.

As well as the committers themselves, there was a nice touch at the Kafka Summit party of a feature wall of some of the many contributors to Kafka:

Remembering what in-person conferences are all about

The sessions were great, the keynotes inspirational, yada yada…but what was best about Kafka Summit London 2022? THE PEOPLE. The real people. It was truly wonderful to chat to people, make new friends, reacquaint with old ones, all around the common theme of Kafka but generally just an interest in technology, event streaming—and sharing ideas.

Some #streamingselfie pics from last night, great to catch up with everyone 😁 pic.twitter.com/K5RyOwLmVP

See you in Austin

Current 2022: The Next Generation of Kafka Summit is only five months away! I hope to see you there—and I hope the great talks you heard at Kafka Summit London will have inspired you to consider submitting one of your own.