The full inventory of three online Kafka Summits in 2021 is now complete. Kafka Summit Americas wrapped just yesterday. Being a part of the event team and the Program Committee, I can say it’s been an exhilarating process to be involved with all three Summits. I hope you as community members and attendees have benefitted even more!

Since last year’s Summit, the world has adapted to online conferences, perhaps to a fault. We wanted to do something this time to help capture the feeling of a live event, and decided the best way to do that was…to make it a live event! At least in part: we live-streamed the opening and the keynotes on day one. Speaking only for myself, it was great to be live-emceeing a Summit again!

Jay Kreps brought us the keynote Data Mess to Data Mesh, whose title—if you watched the live-streamed introduction in which I suggested otherwise—actually was his idea. We’ve been talking about Data Mesh a lot this year (London Summit, Streaming Audio podcast) because it’s a concept that’s really gaining traction and has a natural affinity with Apache Kafka®. If you’re new to the idea, Jay suggested you think of it as doing to analytics what Microservices did for data. Jay also had a couple of product announcements, including Stream Governance. Watch the whole keynote to learn more.

Next up, Jun Rao interviewed Dusty Pierce, the Vice President of Infrastructure at Instacart. At the start of the Pandemic—just a few months after Dusty took the position there—Instacart experienced what they calculated to be ten years’ worth of growth in a period of just a few weeks. You won’t be surprised to hear Dusty say that managing this relied on an infrastructure strategy that was heavily invested in managed services. It was a fascinating chat with a guy who has a very interesting story to tell.

As those live keynotes were proceeding, attendees had a chance to take a poll that asked for a single word that they associate with the Kafka community. As I was giving some housekeeping announcements after the keynotes, I was able to share the word cloud that was auto-generated from your answers. I did this sight unseen, but you know, this is such a positive and energetic community, I was not worried for a moment. Look at all of these beautiful words: 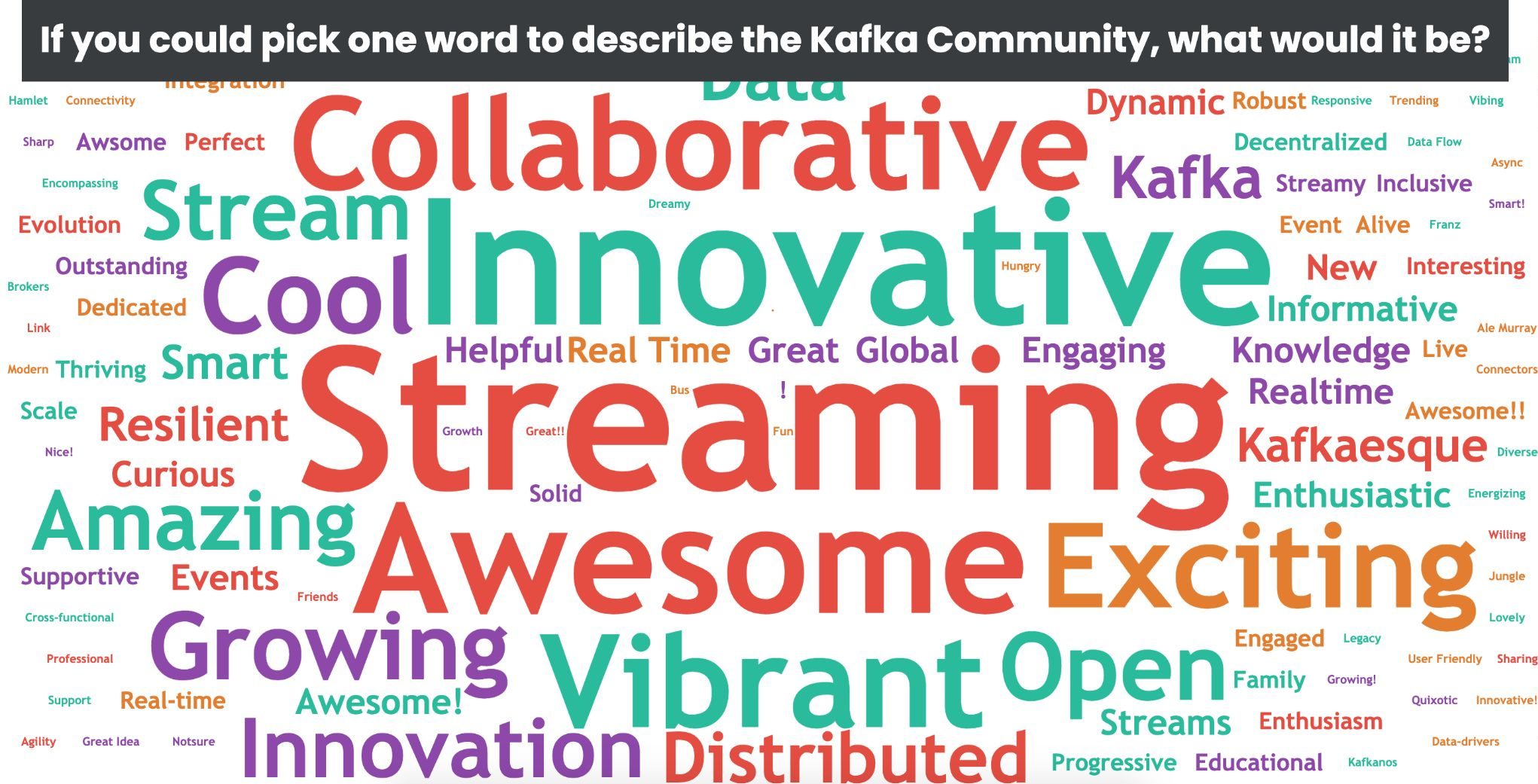 The big words are wonderful, but did you notice the small ones? Here are some of my favorites:

And speaking of Ale, she and I got to welcome the 2021-2022 class of Confluent Community Catalysts in a special live session on Tuesday. That link will soon be updated with the names and faces of the new class. Some are new, some are returning, but all are outstanding contributors to the community.

On the second day, industry pillar Scott Hanselman interviewed three active members of the Kafka Community: Israel Ekpo, Nikki Thean, and Grace Jensen. They talked about how they got involved in the community and what sort of interactions they’ve had along the way. I thought the conversation was remarkable for its authenticity and warmth, which is a thing we could all use more of. Give it a watch if you haven’t already.

And as always, let’s not forget the talks! Here are a few that stood out to me:

As you know, Summit never stops. Before you know it, we’ll open up a CFP for the in-person London Summit in April, 2022, so get your proposal ideas ready and block off time on your calendar to visit London if you can! It will be great to see folks in person, catch up, and keep this community growing. I hope to see you there!