Confluent Platform 6.2.0 introduces some new features to Control Center that make managing clusters an even smoother experience. Here are a few highlights that we are excited to share with you today:

This blog post is the first in a four-part series that discusses the above features in detail. If you are not too familiar with Control Center, please refer to the Control Center overview first. Having a running Control Center instance at hand helps you explore the features discussed in this blog series better.

Now that you are ready, let’s delve into the first feature: creating Kafka messages from within Control Center.

What “creating Kafka messages” is

Prior to 6.2.0, only Confluent Cloud provided single-message producer functionality that allows producing messages in the Topic window, as shown below. This is perfect for producing individual messages to a topic from the Control Center UI to see the topic “working.” However, the built-in producer only allows you to specify the value of a message, not the key. Version 6.2.0 enhances the current single-message producer to support both key and value specification, and it also introduces this functionality to Confluent Platform, our on-prem solution.

How to produce messages in Control Center

The following steps are used to produce individual messages from within Control Center:

It is important to note that if you try to consecutively send messages with different JSON schemas, the messages will be produced without errors but the UI will not be able to show the messages’ fields correctly.

Assume that a message with the null key and {“value0”: “value”, “value1”: [1,2,3]} value has been produced, and now a second message is about to be produced. The first message had three fields as shown at the bottom of the image below: key, value.value0, and value.value1. The second message is about to be produced with the same value fields as before, but the key now has key.key0, key.key1, key.key2, and key.key3 fields. 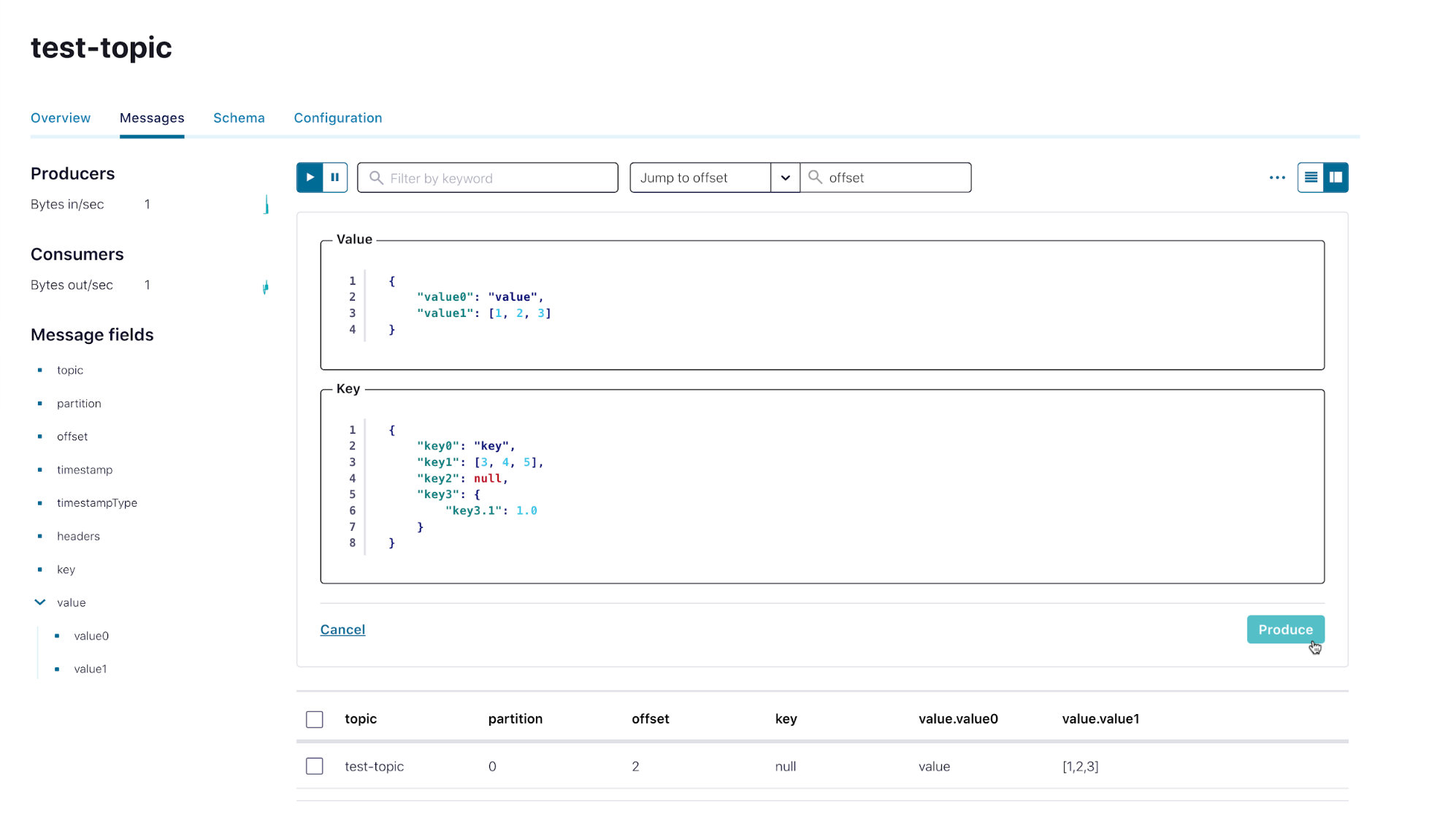 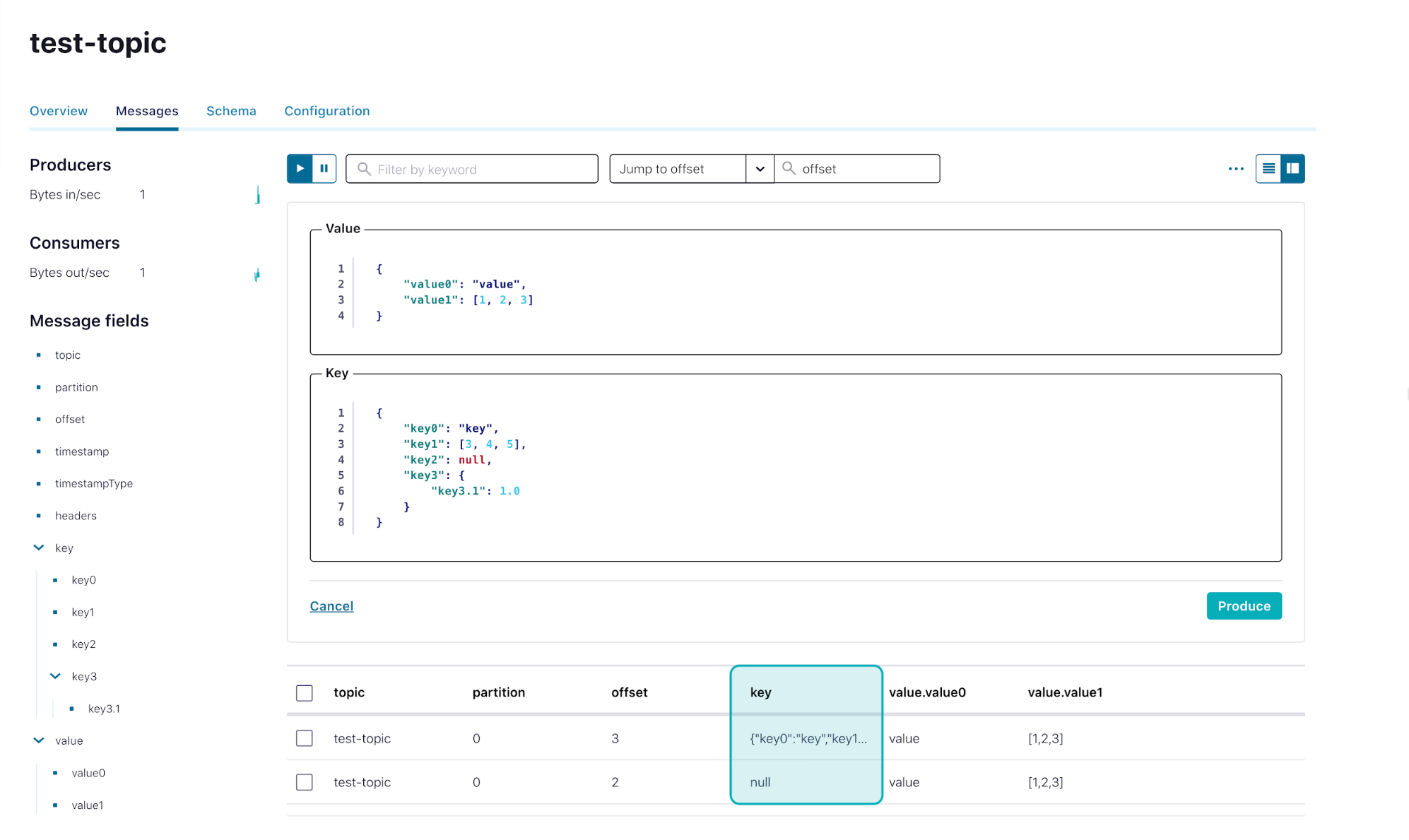 You can fix this by refreshing the page. For example, click on Overview, return to the Messages tab, and try producing the same message again. The fields are now corrected. 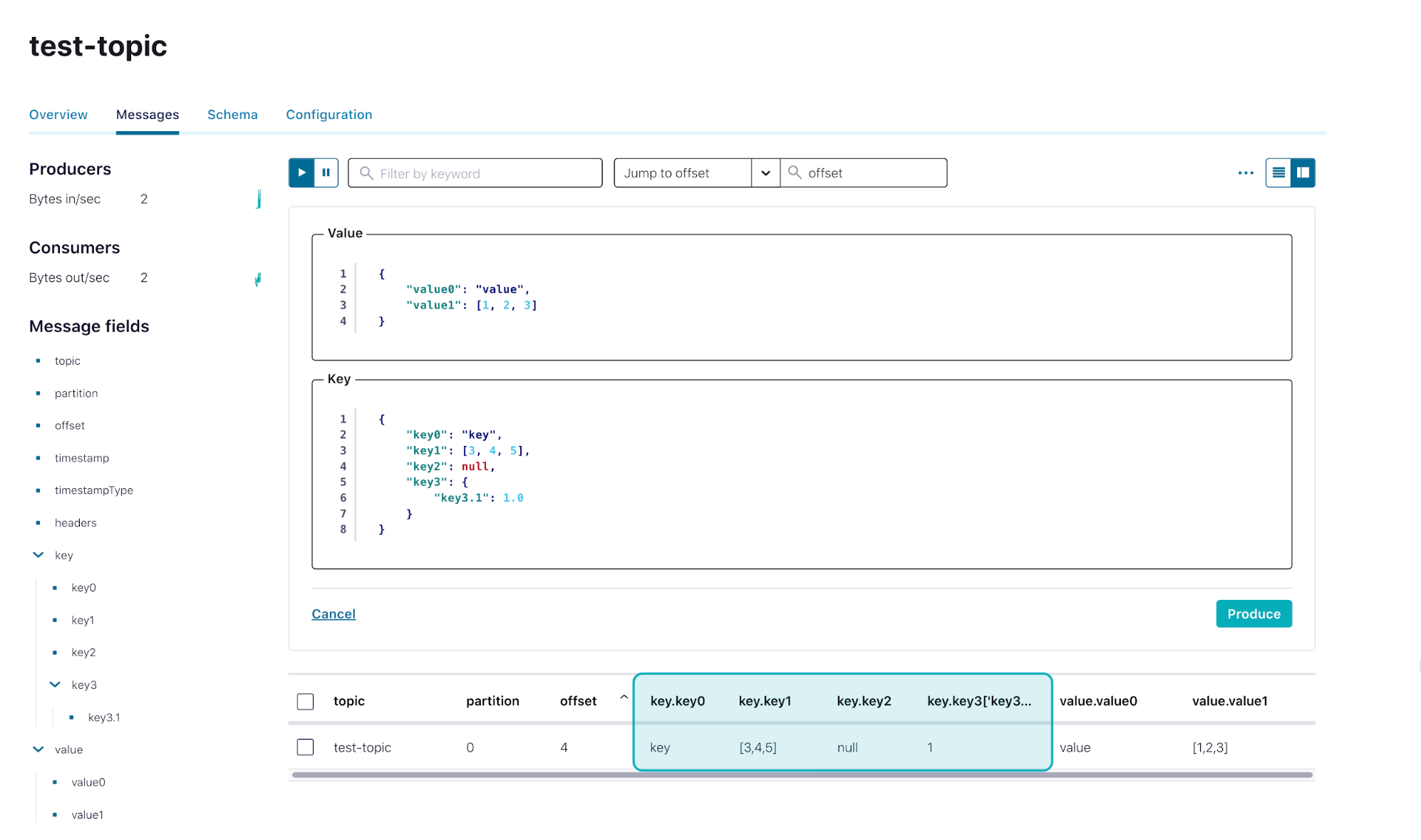 Depending on your topic’s cleanup policy, the values that you can specify for the key and value fields change:

Beyond producing messages from within Control Center, here are a few other ways to produce data to topics.

bin/kafka-console-producer is intended as a tool that sends customized, simple messages to topics through the command line, though it is not suitable for production environments. You can also use its Avro counterpart, bin/kafka-avro-console-producer, to send Avro data in JSON format. For more information, check out Kafka Tutorials and these Confluent Platform CLI tools. Note that this tool is currently only shipped with Confluent Platform, not Confluent Cloud.

The Kafka Connect Datagen Source Connector is intended as a demo source connector to auto generate sample data, though it is not suitable for production environments.

If you haven’t done so yet, Download Confluent Cloud or Confluent Platform today to get started using Control Center.

To learn about other new features of Control Center 6.2.0, check out the remaining blog posts in this series: