It’s about maintaining the right data even when no one is watching.

Last year, Confluent announced support for Infinite Storage, which fundamentally changes data retention in Apache Kafka® by allowing you to efficiently retain data indefinitely. We’re seeing a shift in how users think about the role that Kafka plays in their tech stack, mainly using it as a system of record. This gives rise to new challenges and responsibilities to make sure data is durable and safe. At Confluent, we’ve been hard at work solving difficult and innovative data durability challenges in order to:

While mitigation and restoration are important topics, this blog post focuses on durability auditing, which is our approach to proactively detecting data integrity issues on well over 8 trillion Kafka messages per day in Confluent Cloud.

We’ve all seen the series of 9’s advertised by cloud vendors against their durability SLAs. Those 9’s are intended to provide a guarantee that your data is safe, and a lot of effort goes on behind the scenes to measure and monitor those scores.

Check out the other blog posts in the Design Considerations for Cloud-Native Data Systems Series to learn more about Kafka’s cloud-native capabilities were enhanced for Confluent Cloud:

What makes durability auditing and monitoring a challenge?

Auditing your data is not only resource heavy but also time-consuming. Hence, frequent audits are tough. This becomes even more of a challenge when you take into account that Kafka is an event streaming platform: Data is always in motion.

Scrubbing, a technique for checking and cleansing data for errors or inconsistencies, is an I/O-heavy operation that can also be time-consuming. This technique needs to continuously run, especially in Kafka, because:

Challenges from the past – solved today

In the past, there were situations where we were unable to quickly detect durability issues in our own environments. We have taken this to heart when designing our new durability audit service for Confluent Cloud. Keeping our users’ data safe is a key pillar for the Kafka Data Platform team at Confluent—we went through this so you don’t have to.

In our experience, managing Kafka clusters and trillions of processed messages over the years, we’ve identified several scenarios where there could be lapses in durability. Some of the notable ones include:

Based on our experience and continuous, extensive testing of Confluent Cloud, there are two main lessons learned:

Our approach varies based on the nature of the durability concerns.

Instead of chasing the data, chase the sensitive operations (real-time monitoring).

Any operation that can modify the partition state (metadata or data) is considered a sensitive operation. These operations are a direct result of user actions like configuration change or user-driven deletion of messages, or they are internal to Kafka such as retention management or leadership change. Scrub-based auditing is useful, but in this case, it’s simply not enough. It’s critical to chase sensitive operations in order to detect issues and alert in real time to quickly restore the state back to normal.

When auditing against infrastructure, there is a big difference in scrubbing metadata (which represents individual segments of the data) versus actual user data as the cost of integrity issues are greater for metadata. For user data, there are additional considerations such as the storage medium used.

Confluent Cloud uses a variety of storage mediums, including storage volumes and object stores, to manage the data that our customers store in their Kafka environments. There is a difference in auditing data on local storage (e.g., Amazon EBS) versus data placed on object stores (e.g., Amazon S3) because each storage medium comes with its own durability guarantees. We use this information to help decide the aggressiveness of our data auditing based on those guarantees.

For example, we consider data (or metadata) on broker-local storage to be more sensitive than the data that we store in object storage due to cloud providers’ given durability SLAs. We also consider metadata to be extremely important, so we’re even more aggressive with its audit.

The validation of changes in sensitive operations and weighted auditing helps us to perform extensive durability auditing and monitoring with the added benefit of real-time detection and alerting.

Source of truth for durability state

It’s critical that durability auditing maintains a source of truth, something that can be used to validate the state when sensitive operations occur. A message in Kafka is uniquely identified based on its epoch and offset, which is captured from the partition leader. The metadata is aggregated and materialized in a database, which our durability audit uses as a source of the truth for a given cluster, using the following process: 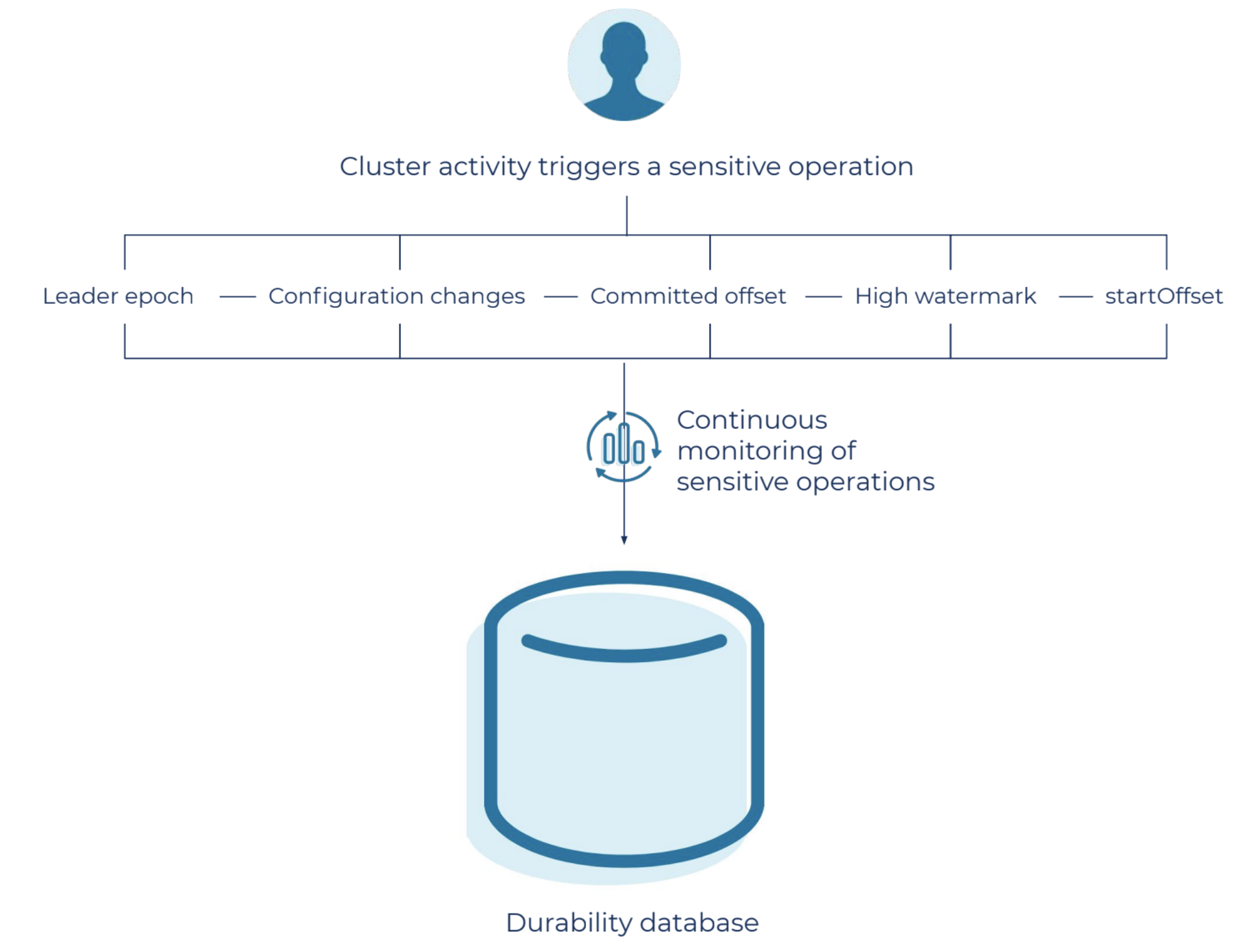 Sample of internal state that’s maintained in the durability database.

One of the key objectives of a durability audit is to generate scores that can help us understand how we are doing with data durability and how we can continue to improve. The unit of measurement for these scores is the number of messages. The percentage of durable messages are used to calculate this durability score. This means that for a score of 99.9999999, 1 out of 10,000,000,000 messages did not meet our durability checks.

The entire durability audit time frame is divided into spans. A span is a period of time used to audit an entire cluster. During a span, aggressive and sensitive regions may be audited multiple times, while continuous monitoring can alert us to any issues in real time. Once a span is over, the durability scores are updated.

Examples of durability lapses and how we detect them 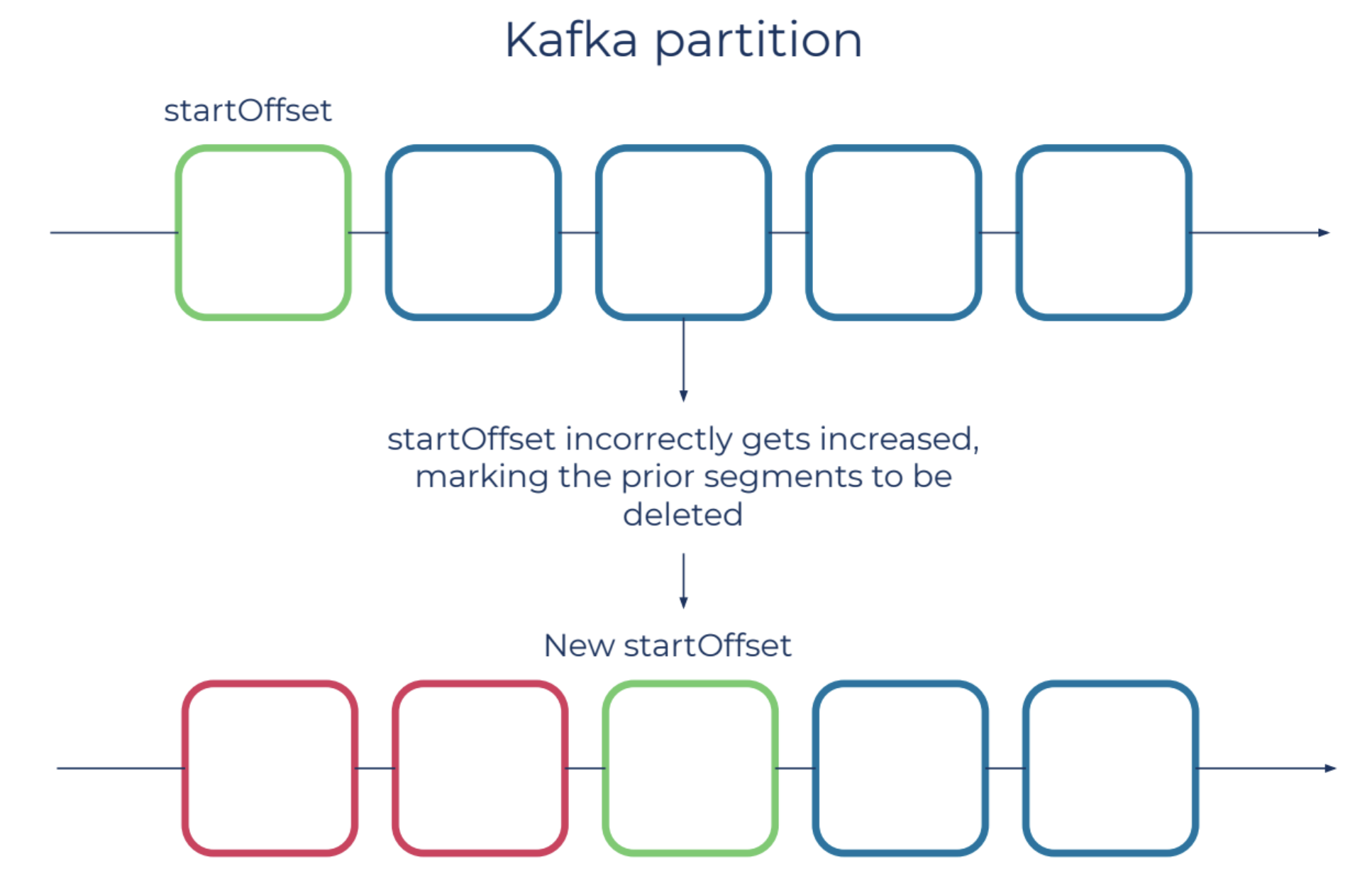 An important piece of metadata to Kafka data is the logStartOffset, which is the first offset in a topic-partition. In a real-life scenario, this was accidentally updated to a value greater than what it was supposed to be. This error will cause Kafka to eventually delete messages prior to the logStartOffset.

In this case, our durability monitoring process triggers an event generated from the logStartOffset change. This event is validated against the durability database to detect whether the user deletion or retention policies justify the logStartOffset advancement. We are alerted to this in real time, allowing us to take action before any harm is done.

Unclean leader elections are situations where replicas that are not in the in-sync replica (ISR) are set to be elected as leader as a last resort, even though doing so may result in data loss. Using the figure above for reference, imagine data replica “A” becomes unavailable and an unclean leader election forces “B” to become the leader, which is not currently in sync with “A.” Replica “B” may start epoch 4 at offset 75, which could be inconsistent since replica “A” might have reported some other message at offset 75.

When you purchase a cloud service, you’re effectively purchasing a set of performance guarantees (among other important SLAs and limits). It’s important that the protection of a user’s data does not impact their performance expectations. We do this by:

With all of these optimizations, and over 8 trillion messages per day, we confidently assert that:

Users put their trust in Confluent Cloud with impactful and mission-critical use cases every day. We work tirelessly to make sure that this trust is well placed—the main mission of the Kafka Data Platform team at Confluent. We hope that this deep and technical look into data durability auditing and monitoring shows how committed we are to that mission and that it gives you some innovative ideas on how to protect data in your own systems.

Ready to start using the most secure cloud service for data in motion? Sign up for a free trial of Confluent Cloud and use the promo code CL60BLOG for an extra $60 of free Confluent Cloud usage.*

Rohit Shekhar is a software engineer on the Kafka team at Confluent, where he works on building the foundations of the next-generation, cloud-native event streaming platform. As part of the initiative, he is leading efforts in providing durability guarantees for Confluent data. Rohit joined Confluent with a successful track record of delivering large-scale data and storage-infrastructure-related features for several successful startups and large-scale companies.

Alok Thatikunta is a software engineer on the Kafka team at Confluent, where he works on building the foundations of the next-generation, cloud-native event streaming platform. He holds a master’s degree in computer science from Stony Brook University and an undergraduate degree in computer science from the International Institute of Technology Hyderabad (IIIT Hyderabad). Alok joined Confluent in 2020.