The phrase time value of data has been used to demonstrate that the value of captured data diminishes by time. This means that the sooner the data is captured, analyzed and acted upon, the more value it brings for the user. To process and act on the data as soon as it is available, many enterprises employ stream processing frameworks.

However, there is a high barrier of entry to using many stream processing systems. Users of such systems need to have deep technical expertise in software design and implementation along with knowledge of programming languages such as Java or Scala. By lowering this barrier of entry, stream processing becomes available to a wider audience, simplifying timely processing and ability to act on incoming data.

To achieve this goal, we developed ksqlDB, the event streaming database purpose-built for stream processing applications. We developed ksqlDB on top of Kafka’s Streams API so we can inherit all of the advantages that Kafka Streams provides, including its advantages for operations and deployment.

This post also summarizes my talk ksqlDB 201: A Deep Dive into Query Processing from Kafka Summit London 2018, where I described how each deployment option in ksqlDB executes your statements.

In addition, Kafka Streams is tightly integrated with Kafka. This allows Kafka Streams to delegate some important aspects of distributed stream processing to Kafka. The foundation of Kafka Streams’ elasticity, scalability, fault tolerance and persistence is provided by Kafka, which results in much simpler execution model for Kafka Streams applications.

Note that stream processing applications built with Kafka Streams do not run inside the Kafka brokers—you run your applications next to your Kafka clusters.

You may run a Kafka Streams application as one or more application instances, where each instance is responsible for processing a portion of the input data. The workload is assigned to the app instances based on the partitions in the input topics, and each partition will be consumed by only one instance.

One of the main operations in distributed data processing systems is data shuffle. Many stream processing frameworks implement the shuffle operation in their processing cluster using a custom many-to-many network communication protocol among all processing nodes. In other words, they are implementing their own messaging layer.

But building a messaging layer that is robust, scalable and fault tolerant is a very challenging endeavor. Instead of following such an approach, Kafka Streams uses a battle-tested solution for large-scale messaging: Kafka!

Kafka Streams uses Kafka topics to perform tasks such as the shuffle operation as well as data sharing across processing nodes (the various instances of your application). This model greatly simplifies the execution and delegates the shuffle complexity to your Kafka cluster.

Consider the following example: We have a clickstream topic with the schema clicktime, pageid and userid for the Kafka message values. The key of the messages is the same as pageid. Now assume we want to count clickstreams per userid. This will require a shuffle operation in which we gather all messages with the same userid at the same place to perform the counting for that userid.

Kafka Streams performs such operations by re-partitioning the input topic, when needed, into a new internal topic where the message key is userid. So now, in the internal topic, we have all the messages with the same userid in the same partition, and we can perform the counting over each partition for each userid.

Since we use the consumer group protocol, each instance will read a portion of input data and generate a portion of the results. You can scale out (more compute power) or scale in your application (less compute power) by simply adding or removing existing instances, respectively.

Similarly, if you scale in your application or lose some of its instances due to machine failures or crashes, the consumer group protocol will ensure that their load is migrated to and redistributed among the remaining instances. Again, this is done using a rebalance operation in the consumer group protocol. Note that in this model, the application instances are not aware of each other. They process the input data and generate the results independently.

Now that we’ve had a quick overview of Kafka Streams and its execution model, let’s move on to how all this powerful functionality helps ksqlDB to perform stream processing by running continuous streaming queries.

A query can be executed on multiple instances, and each instance will process a portion of the input data from the input topic(s) as well as generate portions of the output data to output topic(s). Based on this execution model and depending on how we want to run our queries, currently, ksqlDB provides two deployment options.

As an example, consider the ksqlDB quick start example where we have a pageview stream and a users table. Let’s say we want to build an application that continuously computes the number of page views for every gender and region. We first create our SQL file with the following content:

Note that we also pass the server configuration file ksql-server.properties. An important configuration setting that you must define is ksql.service.id, the service ID for the ksqlDB cluster, which represents the unique prefix for the Kafka Streams applications generated by ksqlDB for its queries. 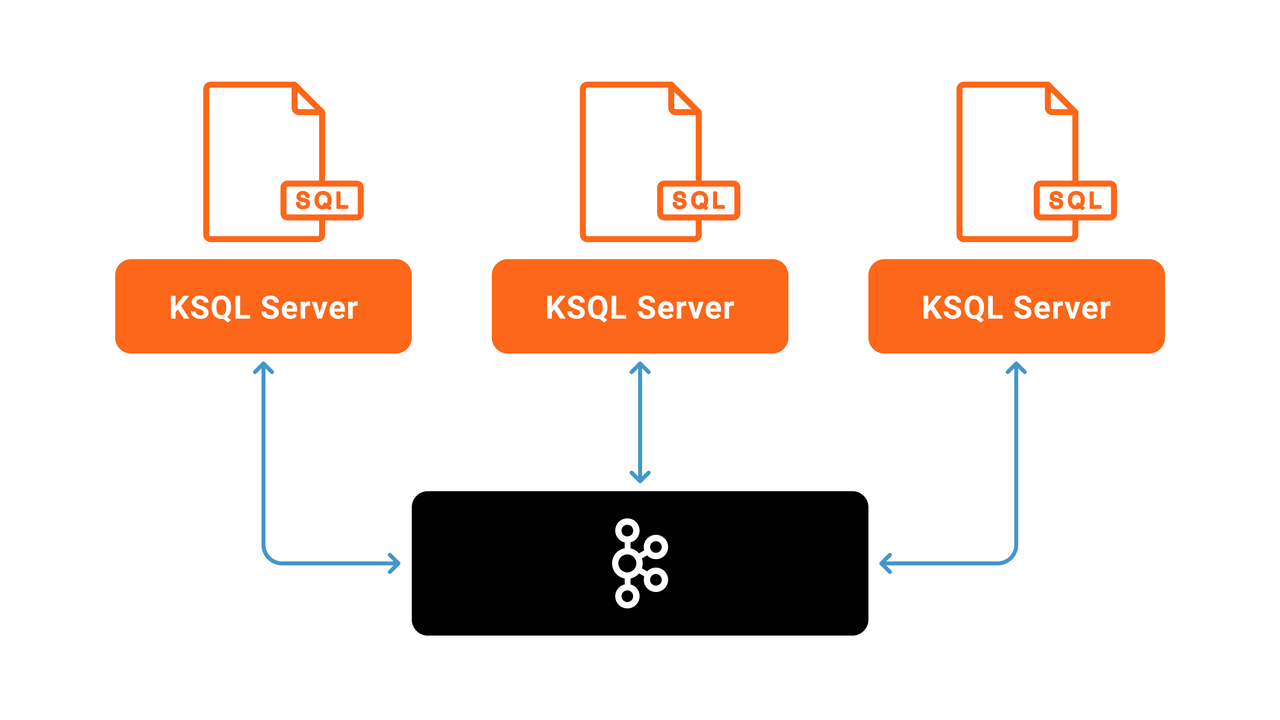 You can, of course, start additional server instances, depending on the resource requirements of your queries. You can verify the output data of your queries by inspecting the contents of the generated output topics. For instance, the count values above will be written into a Kafka topic named PAGEVIEWS_REGION.

The other option for running ksqlDB is interactive mode, in which you interact with the ksqlDB servers through a REST API either directly via your favorite REST clients, through ksqlDB CLI or through Confluent Control Center.

Here, you can interactively explore the existing topics in your Kafka cluster, write queries, inspect their results in real time and more. You can also share an interactive ksqlDB cluster so that users can see and use each other’s streams and tables. In this mode, you start the desired number of servers for your ksqlDB cluster and then interact with them through the ksqlDB REST API. We provide two clients out of the box for ksqlDB’s REST API:

Unlike the headless mode, where each server already knows all the queries it’s supposed to run at the time of startup (via the SQL file), interactive ksqlDB servers in the same ksqlDB cluster share the ksqlDB statements being executed using a special Kafka topic called the ksqlDB cluster’s command topic. 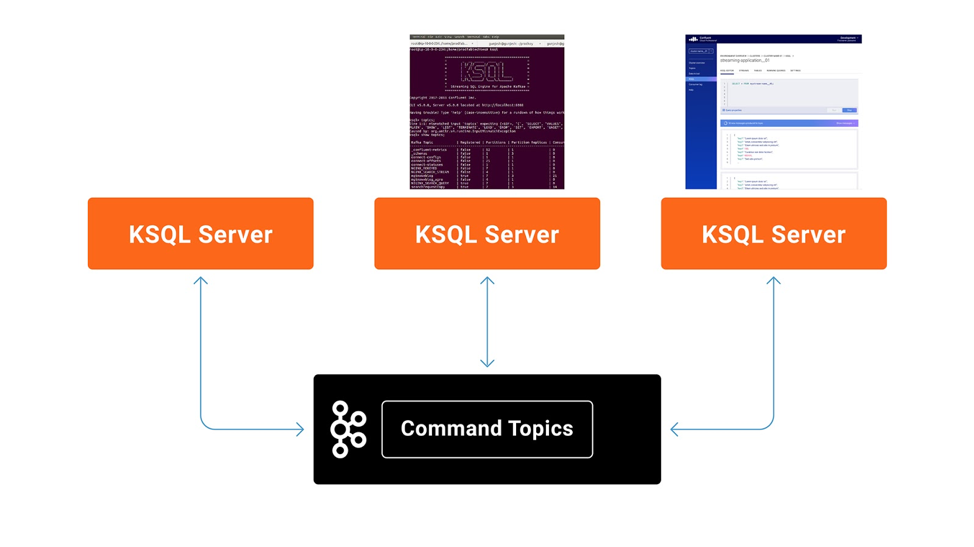 As you can see, the command topic ensures that all ksqlDB server instances will read and execute the same set of ksqlDB statements in the same order. This guarantees that all the servers will be in the same state.

If any of the ksqlDB servers fail while running queries, the remaining servers will coordinate and run the failed server’s workload the same way that Kafka streams applications handle failures, as described earlier. If we need more resources, we can scale out the ksqlDB cluster by simply adding new instances of the server with the same ksql.service.id. The newly added servers will read all the statements in the cluster’s command topic and then execute them in the same order.

Similar to Kafka Streams applications, the new servers will take a portion of the workload from the other servers to run. If we need to scale down, we simply shut down the desired number of ksqlDB servers, and the workload for the eliminated servers will be distributed among the remaining servers.

Unlike traditional store and query systems where the queries have a short lifespan, continuous queries run indefinitely in streaming systems such as ksqlDB, which makes multi-query optimization even more appealing. If these are interesting challenges for you that you’d like to help tackle, check out our career page for open engineering positions at Confluent!