This article shows how you can offload data from on-premises transactional (OLTP) databases to cloud-based datastores, including Snowflake and Amazon S3 with Athena. I’m also going to take the opportunity to explain at each stage the reasons and benefits for doing this.

Let’s start off with the simple question: why? Why would we want to move data from OLTP databases elsewhere? Moving data from transactional databases into platforms dedicated to analytics is a well-established pattern that brings multiple benefits, including:

Traditionally, data was offloaded to on-premises solutions such as Oracle Exadata, Teradata, and other dedicated data warehousing environments. In recent years, there has been a huge rise in the availability and use of cloud-based services providing similar capabilities, including Google’s BigQuery, Snowflake, and Amazon Redshift and S3/Athena offerings.

Along with a shift towards cloud-based and often managed analytics platforms, there are also lots of people realising the benefits of moving towards an event streaming architecture and away from one that is batch based.

In the past, getting data from a source system to the target was generally a job for a batch-based ETL (or ELT) tool. Periodically, you’d poll the source system and pull out new data which would then be written to the target system. The data would be manipulated in a way that makes it suitable for querying either beforehand (ETL) or afterwards (ELT). The limitations of this are clear though:

This is where Apache Kafka® comes into the picture:

Sounds interesting? Let’s see what this actually looks like in practice and discuss some of the particular patterns and benefits to note along the way.

The toolset for database offload to the cloud

There are other cloud analytics platforms—some of them truly cloud native, others being on-premises technology re-badged for the cloud. As with the RDBMS, they are pretty interchangeable with the examples shown here.

All the code for the examples here can be found on GitHub. You can also find a hands-on guide with the nitty-gritty of each step of configuration in this blog post.

I’m going to build the example up over various stages, starting simple and developing it through to become something fairly advanced. Each stage is its own valid entity, and organisations will pick and choose amongst these depending on their requirements and levels of maturity with Kafka and event streaming.

Stage 0: Streaming events from RDBMS to Snowflake with Apache Kafka

We’ll start with the most simple pipeline. Transactional data is being written to a SQL Server database, and we want to offload it to Snowflake for analysis and reporting.

Data is ingested from the database into Kafka, with an initial snapshot followed by any change made against the tracked table(s)—all streamed into a Kafka topic. From there, the data is streamed right out to Snowflake. All this happens in real-time and is done with Kafka Connect and the appropriate plugins:

Now this data from the source database:

…is available both in Kafka and in Snowflake: 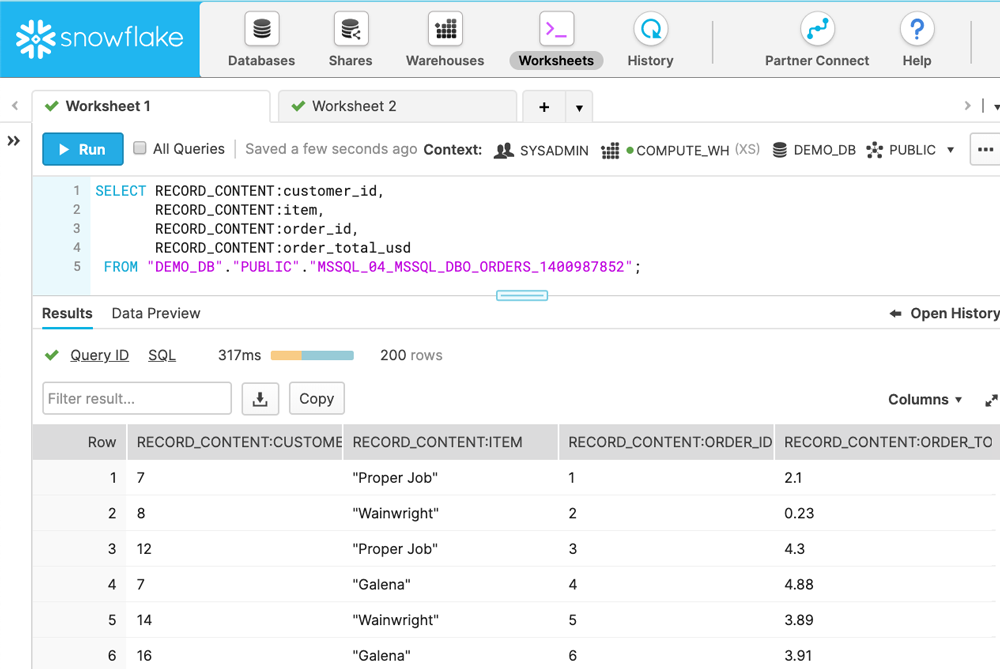 This is a great initial step, but it’s only the beginning. The data in Snowflake is being updated in real time as soon as an INSERT, UPDATE, or DELETE operation changes the source SQL Server database. However, at this point what’s in Snowflake is but a 1:1 copy of the source data. We can do much more, which we will look at next.

The events that we streamed from SQL Server are what happened; in analytics parlance, they’re the facts. Facts are useful but on their own aren’t the full picture. We might know that a customer with an identifier of 17 bought an item, but we don’t know who that customer is—their email address, where they live, and so on. Having this reference data or dimensional data, however, turns a list of facts into something that’s actually useful to look at and analyse.

It may well be that the source of reference data is not necessarily the same as that of the facts. In our example, it resides on another RDBMS: MySQL. We use the same pattern to ingest it into Kafka and push it to Snowflake:

Once both the SQL Server and the MySQL data is in Snowflake, we can join the data in place: 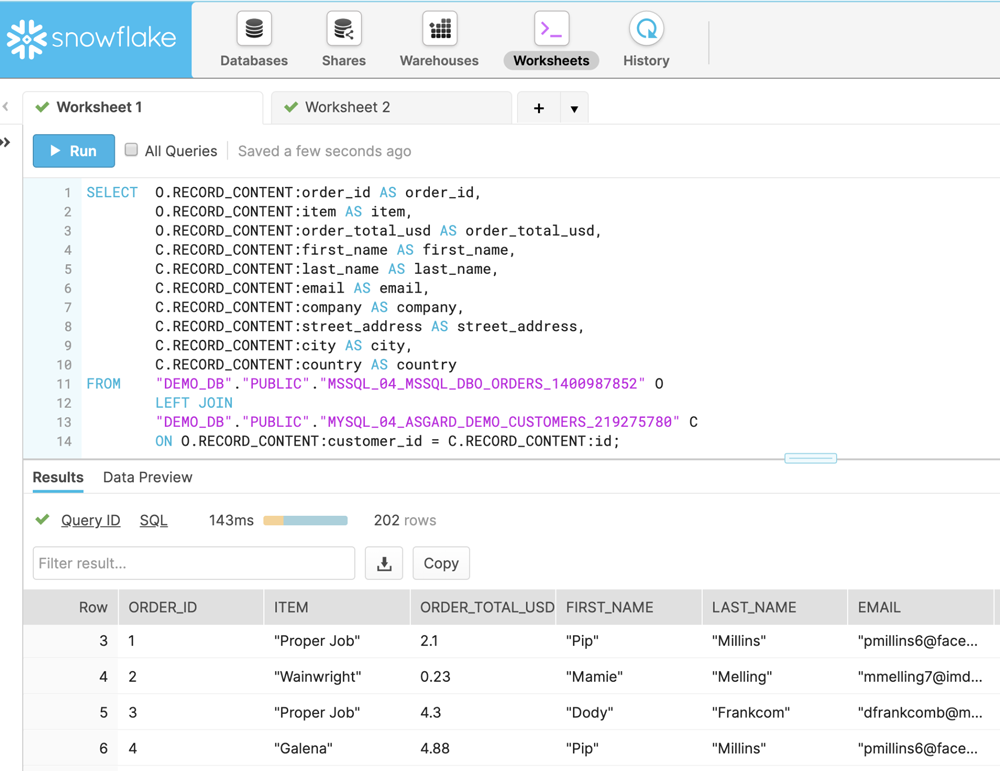 Kafka Connect enables the integration of data from the RDBMS but also from numerous other sources too. The above pattern can be used to great effect for federating data from many different places, including message queues, flat files, as well as directly from applications.

Kafka is not just a “dumb pipeline”; it is an event streaming platform that enables us to store data for reuse, and it also provides stream processing capabilities. You can use the Kafka Streams API, which is a Java and Scala library that is part of Apache Kafka. Or if you prefer something higher level, there’s the event streaming database ksqlDB.

Using ksqlDB, you can express and build stream processing applications that will look rather familiar to anyone who knows SQL 🙂

The result of this query is a Kafka topic populated with denormalised data, joining facts (orders) with the dimension (customer). Denormalising data in advance of querying is a well-established pattern for performance. This is because most times querying a single table of data will perform better than querying across multiple at runtime. 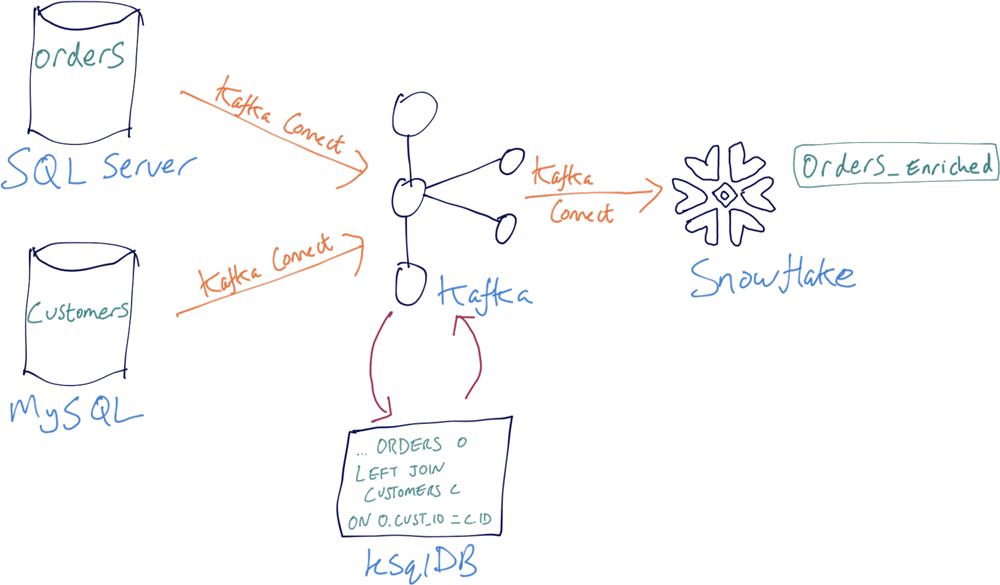 This gives us a single table in Snowflake to query, without needing any joins. The benefit of doing this prior to loading the data into Snowflake is that the query in Snowflake is simpler to write and may well be faster to execute. It also means, as we will see later, that we can reuse this denormalised data elsewhere. 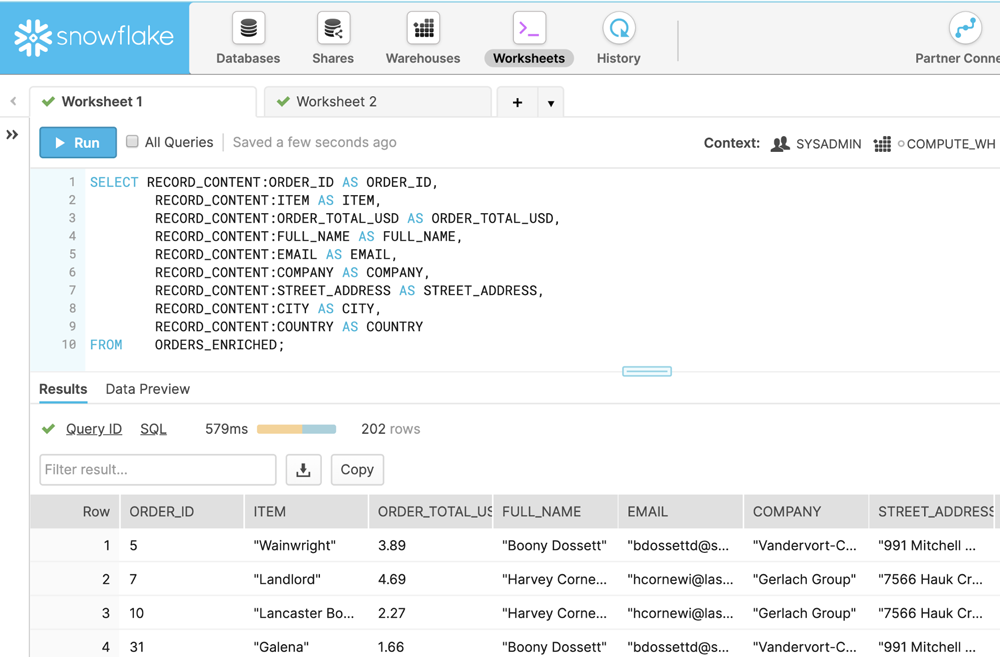 Regardless of what the processing you’re doing is, this has always been previously done as a batch either on the target system (ELT) or before loading it (ETL). Now, we’re doing this traditional transform processing as a stream on the events as they’re occurring instead of as a slow batch in the middle of the night. The transformed data is streamed back into a Kafka topic for use downstream, and there are several benefits to this:

In particular, I’d like to explore the last point further since it’s such a powerful feature.

Stage 3: Transform once; use many

One could easily argue that in the example above, the join on the data could be done on the target system (in this case, Snowflake). It could be done either at query runtime if performance is acceptable or be pre-computed as part of the ETL/ELT process, with the results written to a new table in Snowflake.

But, what about other users of this data? Let’s take a step back and consider this from a more abstract point of view. With the same data being used by multiple teams and systems in an organisation there are several approaches to take.

Previously, we would have done this, in which any other user of the data is dependent on the data warehouse (adding load to it and introducing it as an unnecessary dependency):

Or, we would have done this, in which other users of the data each pull it directly from the source (adding load to a transactional system) and each perform the transformations on it (duplicating code):

The world has thankfully moved on from a single team being the gatekeeper of a single central data warehouse from which all queries must be served. Striving for data quality and consistency in definitions is indeed important and completely relevant now more than ever, but what has changed is that numerous teams throughout an organisation will want the same data yet often on a different platform. And that is OK. It’s not just OK, it actually makes a huge amount of sense. Trying to serve the same data from a single platform for multiple purposes is often not a great idea. Why would we build a search index on data in an RDBMS, do property graph analysis on data held in a document store, or build complex aggregate queries on data in a NoSQL store?

Each technology has its strengths and weaknesses, and by using the most appropriate tool for the job we can deliver business benefits from the data more quickly and reliably. In the past, it was frowned upon to have secondary copies of data elsewhere for both valid reasons (such as data security, data consistency, and overly complex architectures) and invalid reasons (such as empire building, an unwillingness to share, and organisational politics). By using Kafka, we can address almost all these issues and provide a flexible foundation on which to make data available across applications and teams, whilst still enforcing security and governance. 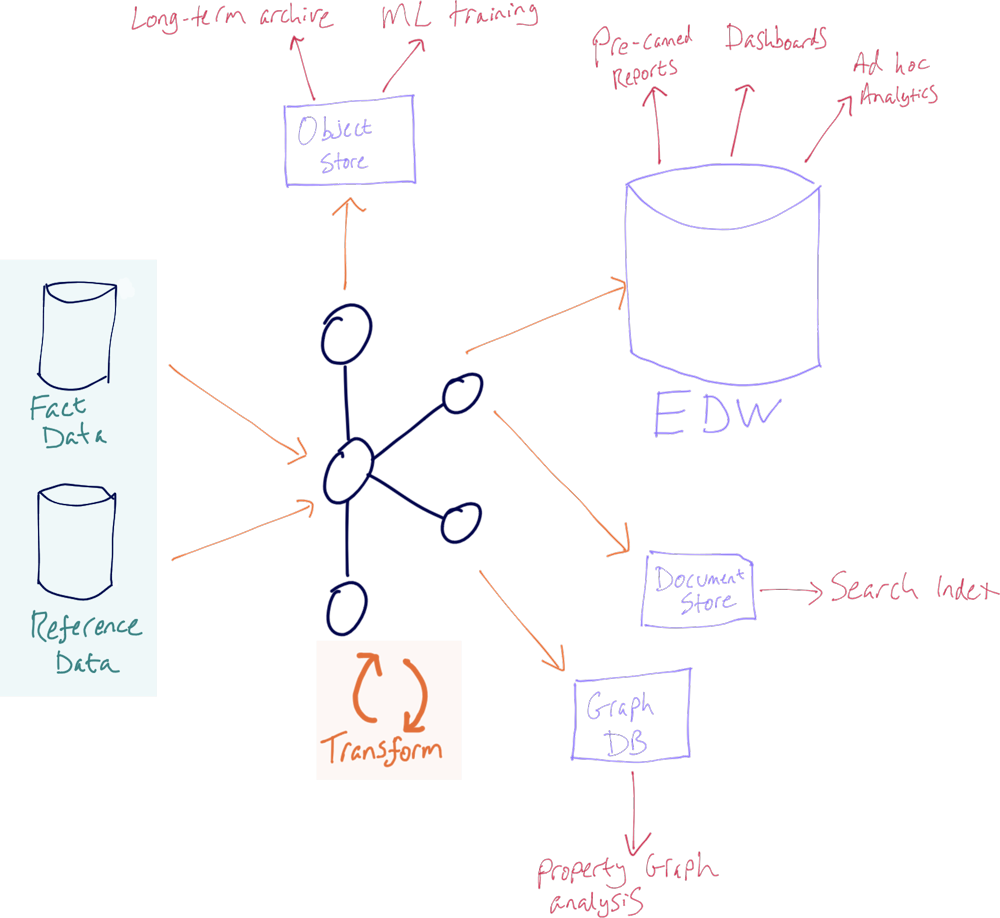 Advantages to this approach include:

Let’s relate this back to what we’ve been building so far. Because we already have the data in Kafka, both raw and transformed, we can simply add another connector to stream the data to Redshift or to S3 for analysis in Athena—or even both if desired. 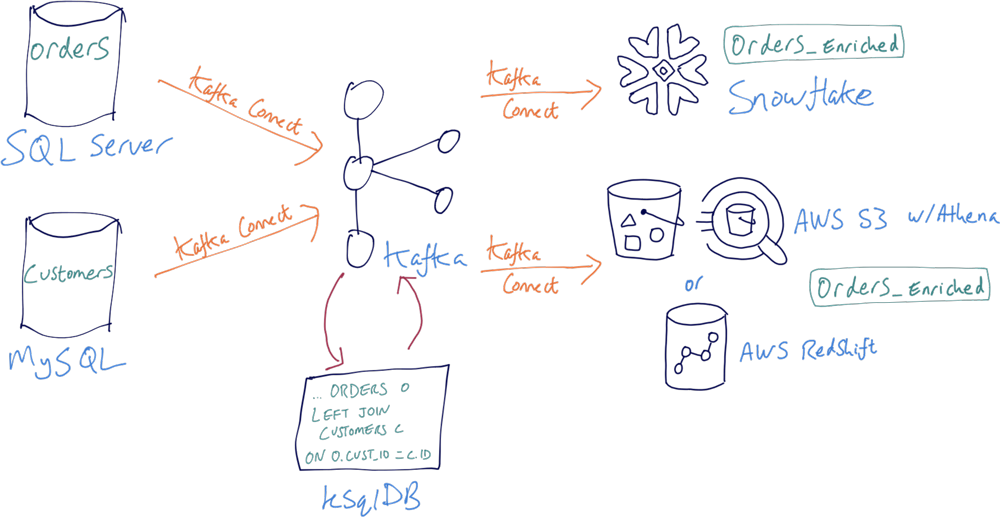 Now consider how this architecture favourably positions us for future changes:

Let’s take a quick look at what streaming data to S3 from Kafka looks like in practice. Setting up an S3 sink is particularly easy because it’s offered as a managed connector in Confluent Cloud, and with a couple of clicks you’re all set: 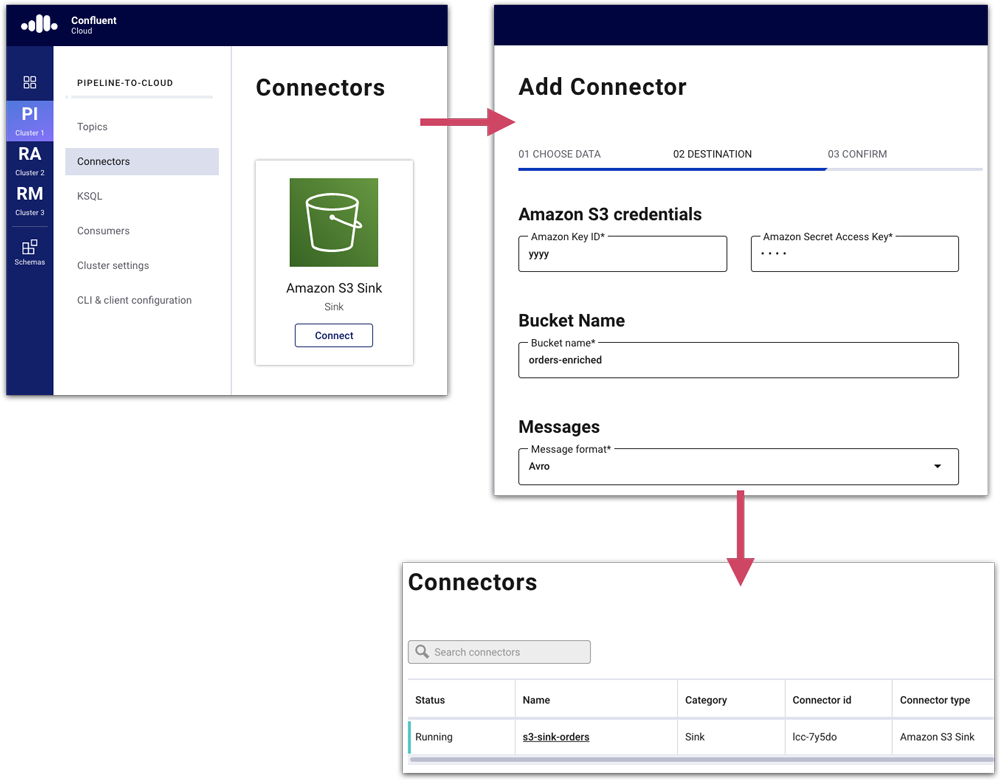 Now we have data flowing from the source system into Kafka, being enriched and transformed by ksqlDB and written back to Kafka. From here, it’s streamed to both Snowflake and Amazon S3, but this is just an example. You can stream data from Kafka to pretty much any target, including a JDBC-supporting datastore, Google’s BigQuery, Azure Blob storage…the list goes on.

With Confluent Cloud and managed connectors, the deployment becomes even easier too:

Where does this run?

I’ve talked a lot about the logical architecture here and the considerations and benefits of building it out in the way that I have shown. To wrap up, let’s discuss where the different pieces of the stack actually reside so you can start building from it today. 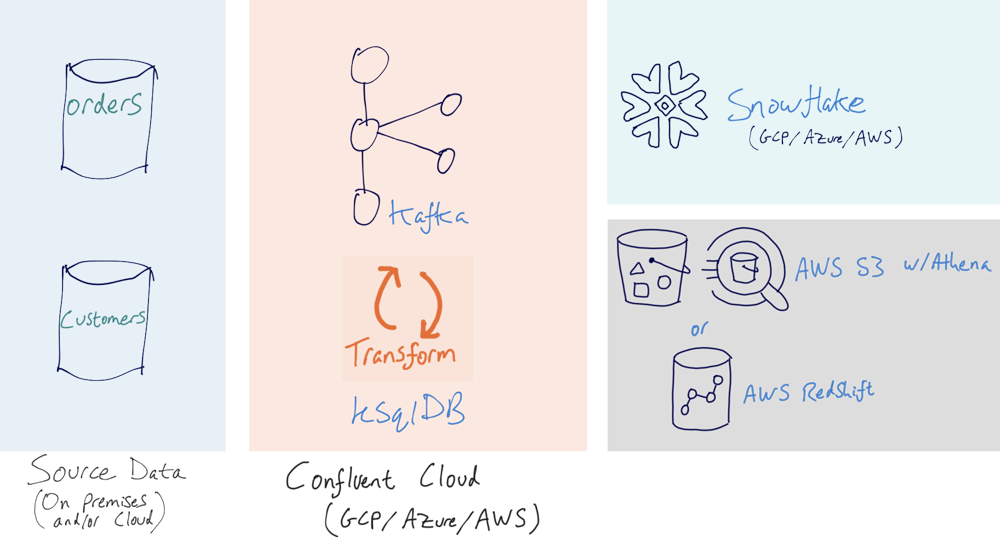 This is assumed to be already provisioned either on premises or in the cloud.

The Kafka cluster can be provisioned as a managed service like Confluent Cloud on GCP, Azure, or AWS, or run self-managed on premises or in the cloud.

Confluent Cloud includes some managed connectors, including one for S3. Other connectors have to be self-managed. When it comes to deploying these, you can do it in different ways. For example:

If you run it on premises, you have potential networking inefficiencies in fetching data from Kafka in the cloud locally to push it back up to Snowflake (in the cloud). 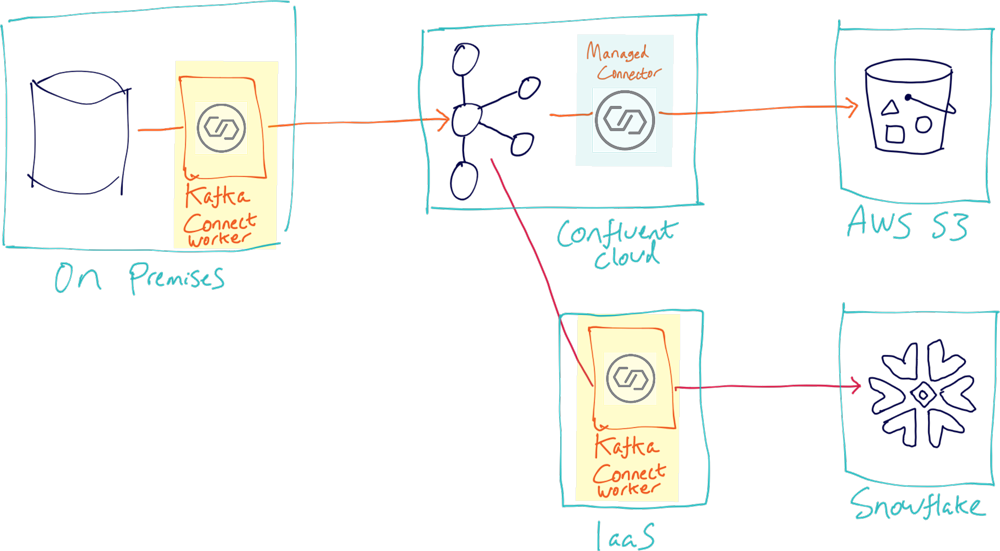 What I’ve shown above is just one way of building out modern data pipelines with event streaming, bringing data from a source that may well be on premises up into the cloud, and doing all this in near real time. Confluent Cloud provides a managed service for event streaming with Kafka, Confluent Schema Registry, ksqlDB, and Kafka Connect. To learn more, you can check out Confluent Cloud, a fully managed event streaming service based on Apache Kafka, and try it for free with up to $50 USD off your bill each calendar month. You can try out all the code shown in this article on GitHub.