When you encounter a problem with Apache Kafka®—for example, an exploding number of connections to your brokers or perhaps some wonky record batching—it’s easy to consider these issues as something to be solved in and of themselves. But, as you’ll soon see, more often than not, these issues are merely symptoms of a wider problem. Rather than treat individual symptoms, wouldn’t it be better to get to the root of the problem with a proper diagnosis?

If you're looking to level-up your Kafka debugging game and understand common problems as well as the ailments that an individual symptom could be pointing to, then this blog series is for you.

Symptoms in the Series

Throughout this blog series, we’ll cover a number of common symptoms you may encounter while using Kafka, including:

These issues are common enough that, depending on how badly they’re affecting your normal operations, they might not even draw much attention to themselves. Let’s dive into each of these symptoms individually, learn more about what they are and how they make an impact, and then explore questions to ask yourself to determine the root cause.

Rebalancing comes into play in Kafka when consumers join or leave a consumer group. In either case, there is a different number of consumers over which to distribute the partitions from the topic(s), and, so, they must be redistributed and rebalanced.

At the surface, rebalancing seems simple. The number of consumers in the consumer group is changing, so the subscribed topic-partitions must be redistributed, right? Yes, but there’s a bit more going on under the hood and this changes depending on what kind of rebalancing is taking place.

The first and most common type of consumer rebalancing is called Stop-the-World. 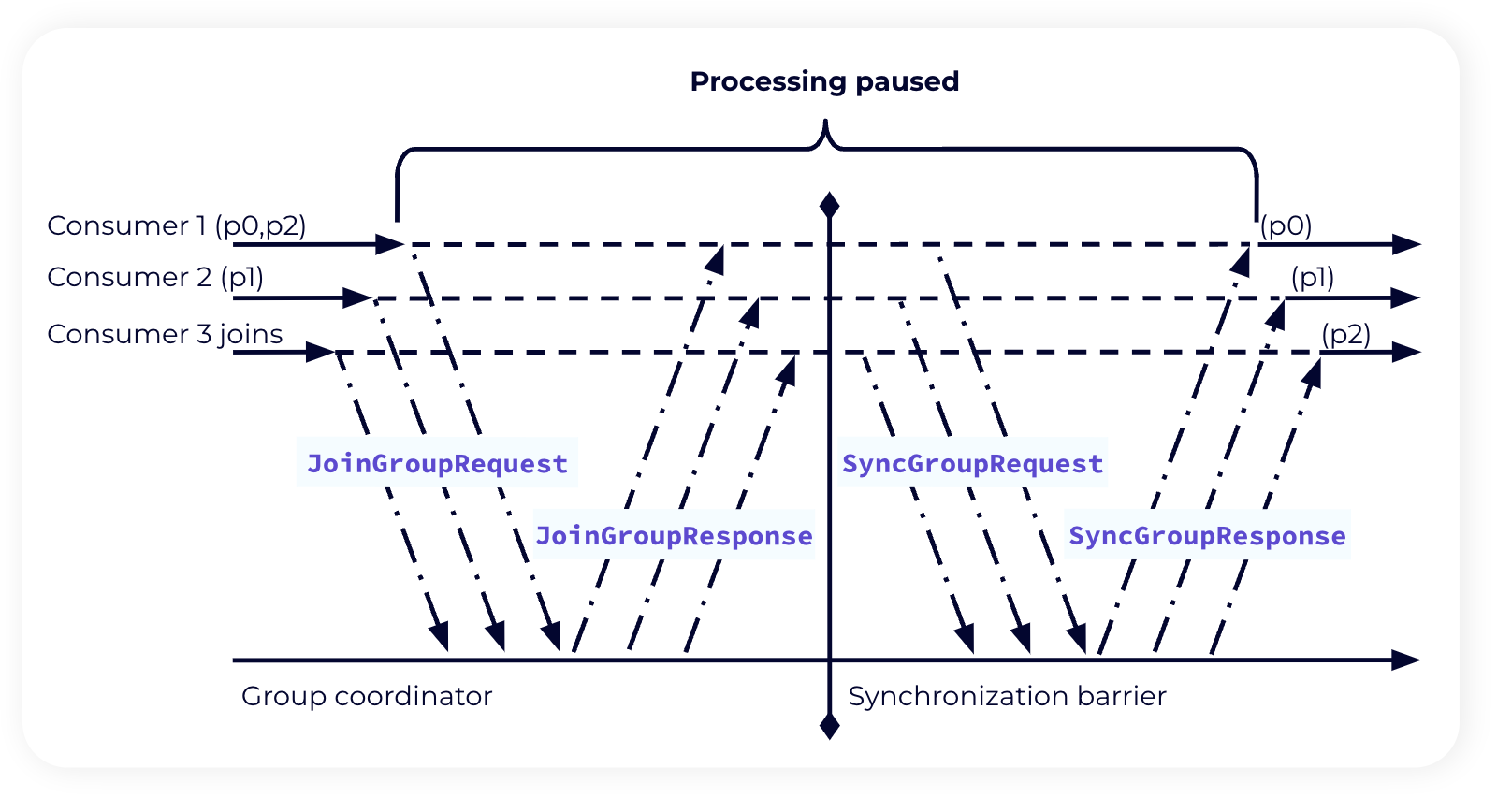 In the case that a single consumer is being added or removed from a consumer group, this process is a bit easier to follow. However, when entire applications, e.g. applications with multiple Kafka Streams instances, are deployed as part of an upgrade, all of the consumers are likely being upgraded and bounced at once or within a short amount of time. This can lead to a domino effect, where multiple JoinGroup requests cause the rebalance to occur multiple times, thus causing the rebalance time to take significantly longer than usual.

The longer a rebalance takes, the greater the consumer lag could be when all of the consumers eventually come online. To minimize this lag, it’s important that the rebalancing process takes as little time as possible so as to not disrupt the current flow of consumption and processing by the existing consumers. Thankfully, there are other options available to help reduce the impact that rebalancing has.

With Incremental Cooperative rebalancing, consumers are less likely to be impacted by changes to the group, and they can continue their processing in the meantime.

Steps 0 through 2 are the same between the Stop-the-World rebalancing and Incremental Cooperative rebalancing.

In some use cases, users have the ability to  further reduce the impact of rebalancing by utilizing a Static Group Assignment. In this scenario, individual consumers within the consumer group are given a group.instance.id and a static assignment of partitions that they individually own. In the event that a consumer goes down for any reason, no rebalance occurs so long as the consumer with that group.instance.id comes back online within the configurable session.timeout.ms.

Understanding the health of your consumers is the first step to mitigating an increased rebalance time and getting to the bottom of what could be causing it. It should come as no surprise that consumer metrics are here to do just that.

In addition to noticing increased time to rebalance…

… are you witnessing higher than usual memory consumption, increased consumer group size, and an increased number of connections? It may be the case that you created one consumer per thread within a single service instance. The use case typically at the bottom of this might sound innocent enough: trying to increase and parallelize consumption within a single instance. Naturally, to do so, you multithread your application and start a consumer instance within each of those threads. However, the cost you pay for increased numbers of consumers is exactly what we saw in the above section.

To move to a multi-threaded model, what you’ll likely want to do is maintain one consumer, thread it off, and place all records coming out of that consumer into a separate thread pool for processing. There are ways to do this successfully, but keep in mind that consumers aren’t necessarily thread-safe out of the box, so you’ll have to be careful about your implementation.

… are your consumer groups large and you see an increase in the number of connections? This is similar to the issue described in the final part of the reduced batching symptom. If your Kafka clusters are cloud-based, your KafkaConsumer instances might be sized too small. It might be time to check into your KafkaConsumer workloads to see if they’re sized appropriately.

… have you hit a dead end? Admittedly, most of the above metrics and explanations on rebalancing related to the clients and how they function. That’s not to say that there isn’t a bit of parameter tuning that can be done from the server side, specifically from the group coordinator. You might see rebalances taking longer if, say, a group coordinator has too many groups to handle or if any one partition is too large (meaning it takes longer to load). If you hit a dead end in tracking down your rebalancing woes from the client side, it might be time to check into your group coordinator.

Exploding consumer rebalancing can be a cryptic occurrence if you don’t know what to look for when it happens. Thankfully, being familiar with these metrics and knowing what followup questions to ask yourself should make the process less daunting the next time around.

To continue on in your Kafka diagnostic practice, check out these other great resources to help you along the way:

It can be easy to go about life without thinking about them, but requests are an important part of Apache Kafka; they form the basis of how clients interact with data as it moves into and out of Kafka topics, and, in certain cases, too many requests can have a negative impact on your brokers...

Apache Kafka® is at the core of a large ecosystem that includes powerful components, such as Kafka Connect and Kafka Streams. This ecosystem also includes many tools and utilities that […]