In Q1, Confluent conducted a survey of the Apache Kafka® community and those using streaming platforms to learn about their application of streaming data. This is our second execution of this survey, so we do have some year over year information. With respondents from over 350 organizations across 47 countries, we’re feeling like this is a solid representation of where streaming data is today, and can be a valuable benchmark for understanding change in the data infrastructure market.

This blog introduces some key findings, or you can download the full report here.

86% of respondents are increasing their Kafka use, 20% by a lot

What will be no surprise to those who are active in the Kafka community: 86% of respondents are increasing their Kafka use, and 20% by a lot. At Confluent, we see this traction at conferences, meet-ups, in our Slack community, activity volume in online communities, and just the general excitement and stories when Kafka people get together. It’s hard to put your finger on that one thing that says a technology is creating a movement; it sure seems like that’s what’s happening here. 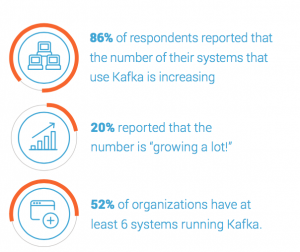 Over Half of Respondents are Using Kafka in the Public Cloud

It would be impossible for a trend with this growth to occur without making contact with the other huge trend in data infrastructure – the cloud! The survey indicates large organizations are moving to the public cloud with their Kafka clusters. In fact, over half of the survey respondents are using Kafka in the public cloud. Kafka can be used as a pipe to help companies move their data from on-premises systems to the cloud of their choice, eliminating vendor lock-in and assisting with the large amount of effort and coordination it takes to make that shift. 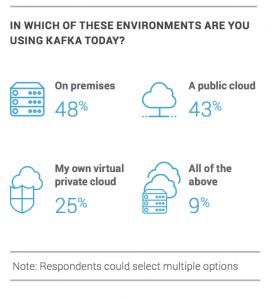 We’re also seeing companies use Kafka for far more than publish-subscribe. The use cases for Kafka have grown to include microservices, IoT, and monitoring to name a few dramatic increases from the previous year. From those surveyed, two-thirds (66%) use Kafka for stream processing and three out of five (60%) use it for data integration. The most common use case for Kafka is data pipelines (81%), while half (50%) are already using it for microservices. As companies are adopting microservices for their distributed architectures, Kafka is here to help. 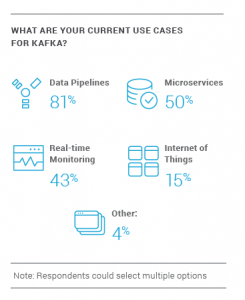 Kafka Engineers are in Demand

With the growing adoption of Kafka, one conclusion worth noting is the lack of ability to hire Kafka talent. While we think Kafka engineers are generally pretty smart ( 🙂 ) turns out they’re also hard to hire. 75% of respondents said they are having difficulty finding Kafka trained engineers. We recently introduced a Kafka certification to help with that problem and also offer training to help developers get up to speed on all things Kafka.

Join us at Kafka Summit NYC!

With these results and the growing use of Kafka and streaming platforms, we’re even more excited about Kafka Summit coming up next week. It’s the best place to learn from companies large and small doing some incredible work with Kafka. It’s not too late to register! We hope to see you there.