The promise of cloud computing is simplicity, speed, and cost savings. But what about workloads that can’t move to the cloud? Are they stuck using expensive legacy tooling and practices? If you can’t bring these workloads to the cloud, perhaps you can bring the benefits of the cloud to these workloads. Google Anthos offers Google Cloud’s technology and best practices in the datacenter, other clouds, and the edge—all as a single pane of glass. When you want to modernize your applications and infrastructure but can’t or don’t want to migrate to the cloud, moving to Anthos is the answer.

Having a consistent, modern infrastructure across environments is a key first step toward modernizing applications, but there’s more work to be done. According to Kelsey Hightower:

There’s a ton of effort attempting to “modernize” applications at the infrastructure layer, but without equal investment at the application layer, think frameworks and application servers, we’re only solving half the problem.

As part of Project Metamorphosis, Confluent announced the ability to build a globally connected Apache Kafka® cluster with Cluster Linking (in preview). This means that you can now deploy Confluent Platform and Confluent Cloud across clouds and on premises and link those clusters together, effectively creating a hybrid data plane across global environments. As we continue to build a thoughtful physical and data infrastructure stack that spans environments, we’re setting the stage for the kind of unified application development that we’d expect in the cloud, except now we get that benefit everywhere.

The final step in modernization is rewriting applications to take advantage of modern application development frameworks and practices. Event-driven architectures are an increasingly popular strategy for decoupling microservices. Microservices produce and consume events to and from Kafka, rather than communicating directly and synchronously.

When you build or refactor your apps to microservices, it’s ideal to remove the dependency on legacy data stores. It’s a common pattern to connect databases or legacy systems to Kafka and have applications pull data from Kafka or a modern data store being fed by Kafka, rather than directly accessing the database or legacy system. This approach has many benefits. First, it makes the data from the source system available as a stream across all environments and to all microservices. Second, it allows you to abstract the system behind Kafka and, in the case of modernizing your applications, it allows you to move away from your legacy system in the future.

Imagine a simple architecture where Kafka is used as the data plane across multiple environments, connecting applications and data stores on premises and in the cloud. Once this architecture is established, you can build applications in a modern way rather than focusing on infrastructure and data.

Anthos and Kafka at the edge

It’s common for hybrid architectures to extend to the “edge,” in addition to private datacenters and the cloud. The definition of “edge” is broad. Here are a few examples:

These examples demonstrate collecting and processing near the data but not directly on the devices. Often, this becomes a hub-and-spoke architecture where you want to do some local aggregation and processing, and also want some of that data to land in the cloud or datacenter.

Deploying across edge sites and providing a consistent environment is important when you have a few datacenters and clouds. However, it becomes a requirement when you are deploying to tens or even thousands of geographically distributed sites. The ability to monitor, update, and secure your applications in a consistent way allows these architectures to be sustainable.

Edge processing might not seem like a good fit for Kafka initially. Many think of Kafka as a heavy distributed system that is “too much” for the edge and hard to manage. Using tools like Confluent Operator on Anthos to ease the management burden, Kafka provides a lot of value and has number of features that make it well suited for edge deployments:

Imagine a manufacturing company with multiple plants around the world that build widgets using advanced robots, each equipped with sensors to track various performance metrics. This company wants to anticipate component failures and preemptively order replacement parts to avoid downtime and maximize productivity and safety. To enable this capability, sensor data from the robots flows to Kafka at the plant, via Kafka Connect à la MQTT, PLC, OPC-UA, or something similar.

Kafka Streams applications are running at the plant doing real-time stream processing and looking for anomalies or wear patterns. Alerts get triggered from the Streams app whenever anomalies are detected, saving time and money. Curated streams are pushed to Confluent Cloud in near real time for further processing and analytics. Data flows seamlessly back to the edge via Kafka. Of course, this is all running on Anthos, where you can deploy, monitor, and manage the applications and infrastructure from Google Cloud.

You don’t have to only imagine a scenario like this, but you can make it happen. 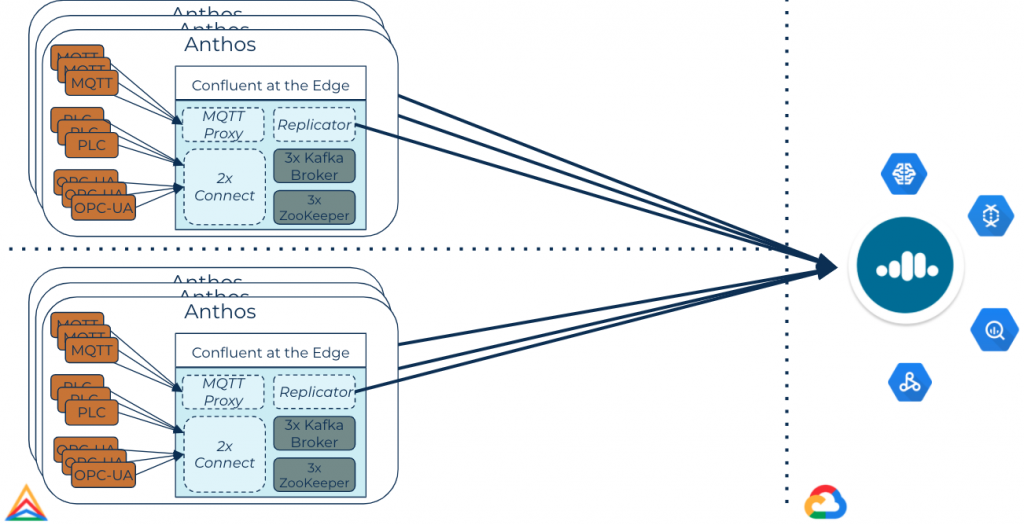 Make it your own

The world is increasingly moving to the cloud, but that movement will not happen overnight, nor will it ever happen entirely. The future is not a binary state of either cloud computing or legacy on-prem infrastructure. It is an ever-evolving symphony of databases, applications, and data processing systems that harmoniously ebb and flow to the tune of the constantly changing requirements of its users, wherever they may be. It is a hybrid future. Combining Anthos and Kafka set the stage for this symphony to be conducted, with you as the conductor.

Take Anthos and Confluent Cloud for a free test drive with Google Cloud’s sample Anthos environment or with a free trial, and start writing your magnum opus for hybrid infrastructure today!

Josh Treichel is a partner solutions engineer at Confluent. He’s spent over 15 years in software development, most recently focusing on building, developing, and supporting distributed systems. Prior to Confluent, Josh worked for a number of startups building data pipelines including Rocana (acquired by Splunk) and Networked Insights (acquired by American Family Insurance).

Vivian Fialho is a hybrid cloud specialist at Google Cloud, where she helps customers in their modernization journey towards building high-quality, modern cloud-native applications for multi-cloud environments. She is passionate about addressing business needs through innovative thinking and leading-edge technologies. Vivian has over 15 years experience in the IT industry mostly focused on DevOps/AppDev space. Prior to joining Google Cloud, Vivian held a variety of sales, engineering, and consulting roles in the telco and financial services sectors.

There is unprecedented growth in the volumes of data being generated by businesses today. Regardless of your industry, better data and data management translates into more informed, strategic decision making.