What you’ve been asking for

Over the past several quarters, we have made major security enhancements to Confluent Platform, which have helped many of you safeguard your business-critical applications. With the latest release, we increased the robustness of our security feature set to help with:

The following new security features are available in both Confluent Platform 5.0 and Apache Kafka 2.0:

The following security features are available only in Confluent Platform 5.0:

Let’s walk through each of these enhancements in detail.

The majority of enterprises standardize on AD for identity-related services. Most people who use directory services would also like to be able to use groups for configuring access controls. In the latest release, we added the capability to use AD and LDAP groups for just this purpose. This simplifies access control management, requiring fewer rules for managing access to groups or organizations. The benefits are:

You can learn more by checking out the Confluent LDAP Authorizer documentation.

Confluent Control Center now gives you the ability to compare the configuration of different brokers in a Kafka cluster and identify any differences between them. This is a great way to see if you have misconfigured brokers that could be contributing to security vulnerabilities. 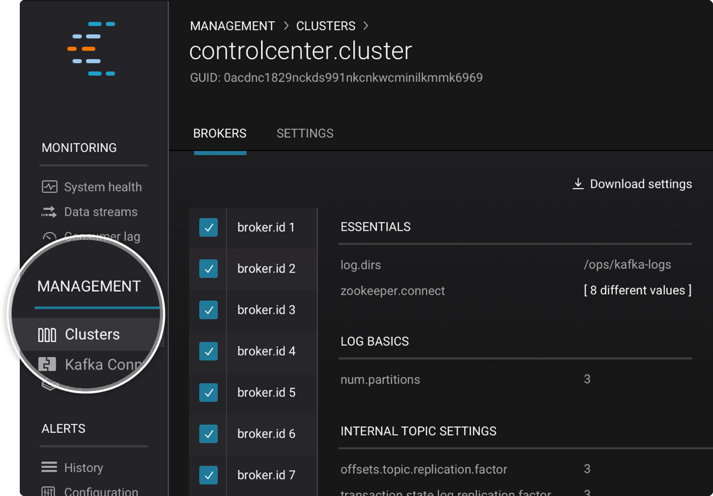 Enterprises need to ensure that end users cannot access sensitive data via Control Center for security and compliance reasons. In order to let administrators control application-wide access to features that reveal topic data, we added the capability to control access to topic inspection, schemas and KSQL queries. When you restrict access to one of these features through the configuration file, Control Center’s user interface will reflect this change upon startup.

ACLs do a great job of controlling access to resources like topics and consumer groups, but they can sometimes lack flexibility like any other kind of sophisticated pattern matching. A resource name in an ACL definition is either a complete resource name or a wildcard that matches everything—no middle ground exists. Oftentimes, you prefer more flexibility in setting up ACLs so you don’t end up with a huge list of them. In Confluent Platform 5.0 and Apache Kafka 2.0, we extended the concept of wildcard ACL (*) to support prefixed ACLs. For example:

Today, Kafka Connect keeps configuration information in clear text, including source and sink credentials. This is not ideal from a security standpoint. At the same time, there are third-party secret stores (like HashiCorp Vault) that provide the ability to protect these passwords at rest and in flight, while also maintaining audit logs, versioning and providing high availability.

Please note that at this point we do not provide built-in secret store plugins—this feature introduces the framework, not the plugins themselves—but you are now able to implement your own.

Streamlining the management of ACLs for KSQL and Kafka Streams

All of the enhancements we’ve made across the platform in 5.0 have enabled us to make further security improvements in KSQL and Kafka Streams applications.

This enables developers faster time to production by streamlining the process of setting access control on source, internal and sink topics.

Securing Your Logs in Confluent Cloud with HashiCorp Vault

Logging is an important component of managing service availability, security, and customer experience. It allows Site Reliability Engineers (SREs), developers, security teams, and infrastructure teams to gain insights to how

In the last few years, we’ve seen hugely impactful cyberattacks that have grabbed the attention of the media, the security community, and the IT industry. The WannaCry attack, for instance,